A sauce to fall in love with 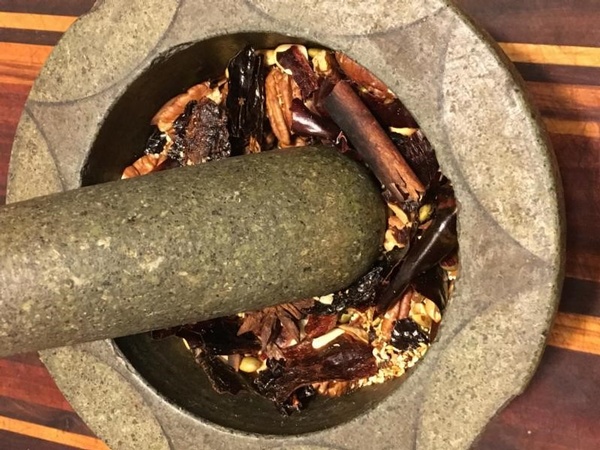 It wasn’t Valentine’s Day when Tita De La Garza prepared turkey mole. Were Cupid running the show, that meal would have been for her and Pedro, who loved Tita as much as she loved him.

Tita, the heroine of Laura Esquivel’s food epic Like Water for Chocolate, was denied the opportunity to marry by her domineering mother. Instead, she made her love in the kitchen, and the people she fed had a way of responding emotionally to her cooking. Tita’s turkey mole (“mole-ay”) recipe was no different.

Alas, Pedro was married to Tita’s sister, Rosaura, and the mole she prepared was to celebrate the baptism of the couple’s first child.

The stretch between New Years and Valentine’s Day is devoid of any food-oriented holiday meals, but you could do worse than fill the time, and your belly, with chocolate and turkey. The combination may not jump out at you as in-season right now, but it is.

Post-holidays, turkey is still pretty fresh, and is on sale big-time. I found some locally raised turkey at my store for less than $2 a pound, which is a great price for animal protein.

And, as we look ahead to Valentine’s Day, chocolate is in the air. Like the lights of Christmas still hanging in the yard, we could probably use some chocolate about now, in the dark depths of the winter doldrums.

Pedro, drawn to the kitchen by the smell of browned almonds, finds Tita on her knees, grinding almonds and sesame seeds with a stone. They share a gaze. Their forbidden love is later consummated in the mole.

The word mole comes from molli, an Aztec word that translates roughly into sauce/mixture/concoction. Today, mole is a celebratory dish that often headlines the feast. At the baptism, Esquivel reports, Tita’s mole helped the guests forget their troubles.

The idea of chocolate in a savory dish seems odd the first time you hear it, but originally, Aztec chocolate was prepared bitter and spicy. Mole is traditionally made in a molcajete, a stone mortar and pestle similar to what Tita used.

So to help you get in the mood for Valentine’s Day, here is an extrapolated version of Tita’s recipe, tweaked for V-Day by upping the chocolate, and with added walnuts to compensate for the fact that walnut-fattened turkey is hard to find these days.

A tortilla or old piece of bread
Olive oil, butter
Cook a turkey, or some turkey parts, any way you wish.

I put mine in the oven at 350, frozen solid if I didn’t thaw it ahead of time, and turn it when it’s brown on top. Bake until it’s so soft you can pull the bones out once it cools. The texture of a rotisserie chicken, but with turkey. It can be achieved through boiling, and other ways, but I like the flavor of baked skin.

Set the meat aside, and put the bones, skin, cartilage and whatnot in a pot of water, along with some whole carrots, lengths of celery stalk, and an onion, cut in half. Simmer for as much time as you have.

Clean the dried chiles, removing the stems, seeds and membranes. Tita saves and roasts the chile seeds, and you can follow her if you dare. (For what it’s worth, the story ends with Tita literally burning away in a flame of passion.)

With a heavy pan on low/medium, add the almonds and pecans, and let them slowly brown. So slowly that you can almost afford to forget about them while you attend to a second pan, on medium heat, to which you add the coriander, black pepper, anise, cinnamon and chile seeds. Stir these often until they start to brown and the coriander seeds begin to pop. Remove the spices from the pan and add the cleaned chile, ripped into pieces of an inch on a side or smaller. Turn the pan down and lightly toast the chile.

Now, gather the nuts, spices, seeds and chile into a stone mortar and pestle. Or, more likely, a food processor. Add the chocolate, and let it rip. When the mole gets too thick, add turkey stock until the blade turns freely, and the mole is the consistency of soupy creamy peanut butter.

Add oil and butter to one of the pans, on medium, and saute? the garlic and onion, along with a pound or so of turkey meat, and a crumbled roll or tortilla. Add broth as necessary to prevent burning. When the onion is translucent, add a half cup of mole and turkey stock, stirring it together as best you can, and cover so the mole melts. Add more mole and stock if necessary. Season with salt.

Tita’s recipe will get you started, but there are many more ways to mole. Different spices, dried fruit, different combinations of chile, different proteins. And of course, Tita’s secret ingredient, which she shares with a guest who asks for her mole recipe.

“The secret is to make it with love.”