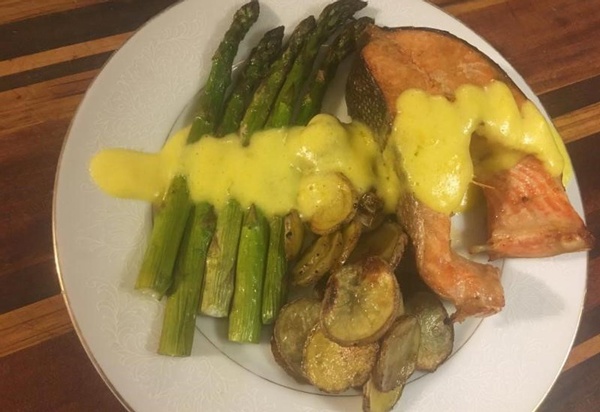 Once there was a man named Oscar, who took his steak with asparagus, Hollandaise sauce and lump crab. That much we know. I first enjoyed this triple-threat of decadence atop a 10,000-ft mountain in Albuquerque, where the restaurant’s menu offered any entre?e “Oscar-style,” for an additional seven bucks.

The name of this side is a nod to Steak Oscar, in which a filet mignon is dressed up as a sort of surf-n-turf eggs Benedict, and there are competing theories over which Oscar deserves credit for this brilliance. The two finalists are the king of Sweden, Oscar II, or a mai?tre ‘d at the Waldorf-Astoria in Manhattan, Oscar Tschirky, aka Oscar of the Waldorf.

Regardless of the true identity of the side-dish’s creator, it’s a good combination. So good it needn’t function just to pretty up some other entre?e. The combination of asparagus and seafood, drenched in the smooth, velvety embrace of Hollandaise, presents more than enough deliciousness to qualify as its own dish. It is the richest sauce, combined with the most luxurious of seafood and the most decadent of vegetables.

While asparagus doesn’t contain fatty deposits of its own, it plays well with the lipids of others. When asparagus is cooked with fish, it can absorb their fatty juices.

Fish and asparagus is an old combination. The earliest known recipe for asparagus, recorded in Roman by Marcus Apicus in the world’s oldest surviving cookbook De Re Culinaria, involved baking asparagus with a fermented oily fish sauce called garum.

That garum sounds nice and all, but I think I prefer a nice wild salmon steak, with the bone in and skin on for extra juiciness. Coat it with olive oil and then sprinkle with salt and garlic powder and some mellow herbs like thyme, or herbs de Provence. Or go Asian-style Oscar: coat with sesame oil and rub with 1 teaspoon sugar, 1⁄2 teaspoon garlic powder, a pinch or two of black pepper. Then add 3 tablespoons soy sauce.

Snap off the tough ends of your asparagus by feeling where the stalk “wants” to break. Arrange the spears like logs in a raft on the bottom of a baking dish, with a table-spoon or two of butter on top. Sprinkle with chopped lemongrass, or zest of lemon/lime (or both). Lay the fish on top and bake it at 350 until done how you like it. The asparagus will cook apace.

As for that Hollandaise, that little black diamond slope of kitchen alchemy. It’s as unforgiving as it is prestigious, but it can be made by mere mortals. You’ll need a whisk

and a double boiler, preferably one that consists of a metal bowl with a rounded bottom on or in a pot of simmering water.

The first step is to clarify the butter. Heat a stick of butter in a thick-bottomed pan on low heat. Watch it like a hawk, stirring every time it starts to bubble. After about five minutes there will be foam floating on top of the pot, and crud at the bottom. Let it cool for a few minutes, then spoon off the foam and carefully pour the clarified butter into a dish that itself will be good for pouring, being careful not to allow any crud or foam scum to pass, using a spoon to play “D” if necessary.

If you wish, asparagus can be poached in the butter as it clarifies, perhaps broken into little pieces. Add a little extra butter if you want to do that, and remove the asparagus right after spooning off the floating scum.

Alternatively, poach your asparagus separately in butter, or 50/50 with extra virgin, for a rich result. Serve asparagus destined for Hollandaise at room temperature or warmer.

In addition to the clarified butter you will need: 1 tablespoon lemon or lime juice or light vinegar

Combine all of these except the yolk in the double boiler, with the water on the lightest of simmers. Then kill the heat, leaving the bowl in place, and whisk in the yolk. Keep whisking until it’s a froth of bubbles. Beating continuously, slowly pour in the liquid clarified butter, a few drops at a time at first, whisking them in until completely incorporated. Then a few more drops. When half of the butter has been added you can add it a little faster. You should, at this point, have Hollandaise.

While it’s often advantageous to cook the asparagus with the seafood, sometimes the asparagus is cooked separately. Perhaps you want to wrap the spears in salmon lox, drench in Hollandaise and sprinkle with minced capers.

Blanching is fine, and then shocking in ice water to keep the bright green color and serving at room temperature.

Salmon isn’t the only fish suited for Oscar-style. Anchovies are great with Hollandaise. As are shrimp, lobster and of course crab, the original Oscar seafood.

In addition to Hollandaise sauce, one can always bust out a Bernaise, with its bouquet of herbal

vinegar. And then there is the beloved Maltaise sauce, in which blood orange juice is used along with the lemon for a rich orange colored cream. If you do an image search for Maltaise sauce, most of the hits will use asparagus as a prop.

As it is the season of asparagus, it’s time to get our Oscars on. Those ideas will hopefully get you started, but there are infinite ways to combine asparagus and seafood with Hollandaise. If you want to substitute steak or cauliflower for the fish, it’s still fine. It doesn’t matter which way you do it. The important thing is that you do it, and that you don’t screw up the Hollandaise. Oscar, whoever he was, would be proud.