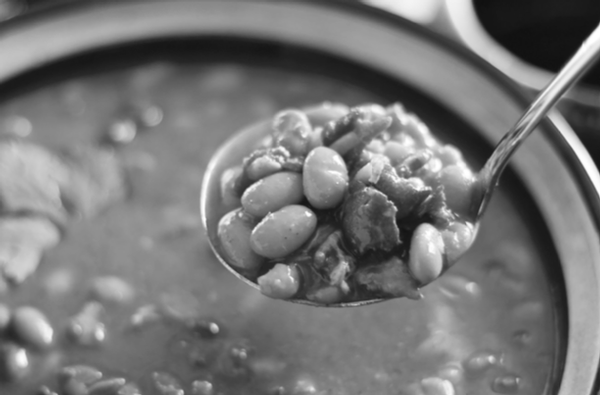 Of all the things to feel bad for vegetarians over, bone broth is up there with bacon. Making a proper broth without assistance from the animal kingdom is nearly impossible. Vegetables can impart an array of subtle aromas. Mushrooms will fill a pot with mysterious and meaty umami, and herbs might add complexity, but those are merely flavors in your mouth. Broth needs to be felt in your body. Your bones, as it were. For that, it needs a foundation of protein. Luckily for plant eaters, beans can do the job. They make a surprisingly good broth.

You’ve probably noticed the other-worldly satisfaction that a bowl of miso soup delivers. Miso is fermented paste of a soy bean. Soy sauce, known for its rich meaty flavor, is fermented as well. Based on what miso and soy sauce bring to the table, it’s no huge surprise that broth made from other types of beans can get the job done, too. Compared to fermenting, bringing a pot of water and beans to a boil is a quick and easy way to unlock the power of the fabacea, also known as the legume family.

The purest form of bean broth is called “aquafaba,” a newly minted French word that refers to the leftover water from cooking beans (it literally means “bean water” in Latin.) Aquafaba has become a star in the vegan community, especially when made from garbanzo beans, thanks to a unique set of properties. For starters, when whipped, it will stiffen, just like an egg white. In addition to being a popular egg replacer, it’s used to make vegan meringue, pudding and mayonnaise.

I couldn’t get garbanzo bean aquafaba to whip, but the flavor had a musky, fungal intensity that I could see might interest the meat-deprived. Tasting the plain bean water gives insight into how a broth made from those beans would taste, so I went ahead and made some fava aquafaba, which is buttery and mild. Black bean aquafaba is too dark and astringent. Lentil aquafaba is rich and starchy. These aquafaba tests confirmed that my favorite bean to make broth from is the pinto bean, which has a soulful aroma, a creamy feel and just the right amount of bean flavor.

The difference between aquafaba and broth are the other flavorings that get added – the vegetables, seasonings and fat that turn a subtle stock into a delicious broth.

Broth is a team player, unselfishly raising the level of the food around it, without hogging the spotlight. It’s the secret behind untold soups and sauces, a perfect liquid for deglazing a pan when re-heating leftovers, or just a liquid to sip pleasantly on a cold day.

Here’s a recipe for pinto bean broth, followed by two recipes that, having made bean broth, you would then be in a position to follow, as they use bean broth as a raw ingredient.

In the first recipe, the beans are cooked twice, once by themselves and once with vegetables and seasonings. I use a pressure cooker for the first cooking, to speed it up, then switch to the stovetop.

Optional: 5 curry leaves, or other soup spices (see below); bacon or some other kind of fatty pork (because pork goes with beans, it will, I’m sorry to say, make the bean broth better); 1 tablespoon butter, because butter

Pour beans into the pressure cooker and rinse with cold water. Dump the water and add 3 quarts cold water. Pressure cook for an hour, or cook for two or more hours on the stove, until completely soft.

Place beans in a pot, along with the water they were cooked in, on the stove if not already there. Add the rest of the ingredients and heat to a simmer. After about an hour, turn it down to the “lazy bubble” temperature range. Leave it there, staying barely warm until it’s needed. Add water to replace what evaporates, and what you lose as you season, taste, season, taste. Keep it simple, but make it taste good.

When the carrots start to lose their flavor, it’s done. Let it cool to room temperature. Strain the beans and veggies and set them in a cool place.

The remaining liquid is bean broth.

If you want to purify it a bit more, let it sit for a few hours or overnight in the fridge, and then decant the non-cloudy portion.

Perhaps my favorite use for pinto broth is as a water replacement when making a pot of rice. Add a few stray beans for extra color and fun. But most of the flavor and nutritional value is in that bean-based liquid.

Or, fry an egg atop a shallow puddle of boiling buttered bean broth; it cooks on the steam as the broth evaporates and thickens into a delectable sauce that is lovely with the egg.

The beans and veggies you filtered out can be fried in oil, with a little garlic, like refried beans. Mash as you fry. Add bean stock as necessary to rehydrate these chunks with flavor.

Or, instead of adding stock to the refried beans, you can add the beans back to the broth. Don’t re-add the veggies you strained out, but you can cut up some new ones. You don’t have to add all of the beans, either. It all depends on how beany you want this chunky broth. Add those curry leaves, or some other herb, and some kind of fat. Lemongrass, coconut and tamarind is a great combination in lentil broth. And of course, when in doubt, add butter or mayo.