Asparagus turned on its head 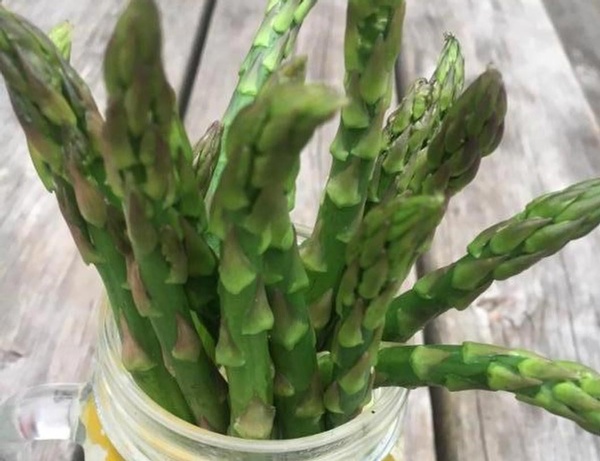 The world’s oldest surviving cookbook is a collection of Imperial Roman recipes, compiled around the 1st century AD. In the intervening millennia the book, Apicius De Re Coquinaria, has attracted plenty of interest from scholars, cooks and food nerds who’ve poured over each line of text and attempted to observe each word from every possible angle like it’s Finnegan’s Wake.

In the game of historical recipe reenactment, a single mistranslated word can derail a dish. In Apicius Book III: The Gardener, for example, one particular asparagus recipe hinges on how the word rursum is translated. This is not just any recipe, but one that addresses a fundamental issue in asparagus cookery with an elegance rarely seen since.

Attempts to translate this work have been complicated by the fact that many of the recipes were written in vulgar Latin, an informal version of the language. Rursum is followed by in calidam, which means “...in boiling water.” It’s also at times written as rursus in aquam calidam.

So, asparagus was cooked rursum/rursus in boiling water, and for centuries nobody knew what that meant. The riddle was finally cracked by Joseph Dommer Vehling, in his 1936 translation of Apicius: “In this case, rursus
means backwards, being a contraction from revorsum, h.e. reversum. The word is important enough to be observed.”

OK, so we are now supposed to cook asparagus “backwards” in boiling water, but I’m still a bit foggy. Of course, backwards has the meaning of something that’s obsolete, and it’s tempting to write off the recommendations of such an old book, which I can assure you would be a mistake.

Luckily, somehow, Vehling manages to gaze deeply enough between the lines of text to dredge out the answer. “Apicius evidently has the right way of cooking the fine asparagus. The stalks, after being peeled and washed must be bunched together and tied according to sizes, and the bunches must be set into the boiling water ‘backwards,’ that is, they must stand upright with the heads protruding

from the water. The heads will be made tender above the water line by rising steam and will be done simultaneously with the harder parts of the stalks. We admit, we have never seen a modern cook observe this method. They usually boil the tender heads to death while the lower stalks are still hard.”

Here, Vehling and Apicius acknowledge the culinary riddle that’s wrapped in the botanical enigma that is asparagus: the fact that one end of the shoot needs less cooking than the other. And what Vehling said 80 years ago rings just as true today: we overcook the tips.

The difference between the tip and tail of asparagus represents the divide between youth and maturity. Botanically speaking, the growing tip of a plant is called the apical bud, which is a place of rapid cell division and differentiation. After new cells are created, they become specialized into different parts of the plant. Before this, the unfinished cells represent a soup of enzymes, minerals and other materials associated with rapid growth.

Of course, fast growth isn’t always a good thing; ask any cancer patient. In fact, an amino acid called asparagine has recently been implicated in the growth strategies of some cancers. Scientists in the UK recently determined that l-asparaginase, an enzyme that breaks down asparagine, can slow the spread of

breast cancer cells – presumably by removing the asparagine. Similarly, l-asparaginase is used as a chemotherapy against leukemia as well, and some patients with these cancers are even being counseled to follow diets that are low in asparagine.

Asparagus, not surprisingly, is a rich source of asparagine, but hardly the only one. The amino acid is found in a wide array of foods. Beyond that, the body can and does manufacture its own asparagine, as it deems necessary. If you could somehow limit your asparagine intake, your liver would simply make more.

So I wouldn’t overthink the health implications of asparagus, at least with respect to the spread of cancer. And the idea of al dente asparagus tips remains alluring.

Some chefs cook the tips separately from the rest of the spears, which can be pureed into a soup or patina. My default technique has always been to estimate the line between tough and tender by grabbing the tip with one hand and the tail with the other hand, and bending the shoot past its breaking point. The point where it breaks is the line between tough and tender. It’s a handy trick, but when you cook your asparagus backwards, you can micromanage the tips to your hearts content, while none of the tails get tossed.

This recipe is a direct riff on Apicius technique, with just a few modifications. Rather than tie the asparagus with string, I bunch it into a narrow mouthed pint jar like a bouquet of flowers, and immerse it backwards in calidam.

You want the boiling water level to be about 2 inches lower than the top of the jar. And the jar should be filled with a mix of heavy cream and butter, with a clove of garlic, squeeze of lemon, a pinch of nutmeg, and salt.

With this recipe, there is no reason to break or trim the ends. It doesn’t really matter how tough they are going in, because they soften plenty as they cook, with their cut ends against the hot glass at the bottom of the jar of simmering cream. The asparagus tips, meanwhile, dangle far above in the gentle steam, warming more than cooking.

When the butt ends are soft enough – about 20 minutes – I cook the tips by covering the pot with a tight lid, checking obsessively until they are perfect.

Alternatively, cook the asparagus until the tips droop over like a fistful of wilted dandelions and call it good.

Or, give the tips nothing but gentle steam, and eat them warm. The heat is enough to volatilize a range of flavors, from musky to minty, and the crunch is still audible. At the other end of the shoot, what had been tough and chewy is now soft and impregnated with creamy garlic butter. The tips, of course, can be dipped into the jar as well. And the asparagus-infused cream should definitely be saved for later. (The butter separates out and can be used on toast).

It’s fun to mess around with a cooking method that is so old yet so relevant. To realize you may never cook asparagus the same way again is a reminder of just how little people and food have changed over the years, a point that was not lost on Vehling.

“We arrive at the comforting conclusion that we moderns are either very ancient and backward or that indeed the ancients are very modern and progressive; and it is our only regret that we cannot decide this perplexing situation to our lasting satisfaction. Very true, there may be nothing new under the sun, yet nature goes on eternally fashioning new things from old materials.”