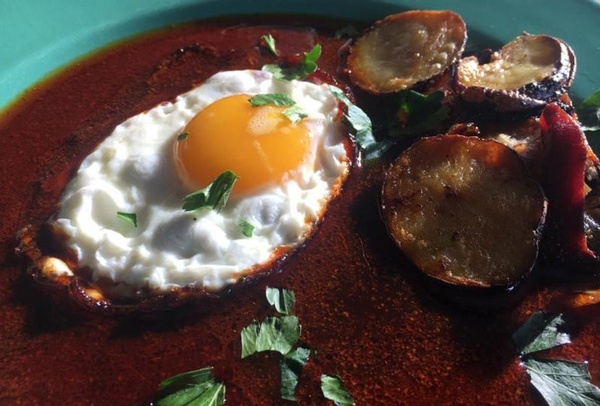 When your wife asks you to make a certain meal for a work potluck, and you’re a food writer, a certain kind of pressure is on. Especially when it’s not just any meal, but red chile, culturally appropriated from New Mexico, where we started our family, where it was always sunny.

By “chile” we don’t mean the South American nation, or the tomatoey bean stew that is spelled “chili” but could be called “spiced beans ’n’ burger.” Chile is the word used by the Mexican descendants of those who first domesticated wild chiltepin plant and by the New Mexicans who took on the horticultural species and created its own chile-based cuisine. “Chili,” meanwhile, is the version of word used for what a Midwestern cook would serve alongside seven-layer salad.

Red chile is a way of saying ripe chile pepper. Pretty much any pepper will turn red eventually. In New Mexico, a pepper’s development is closely monitored, because different stages of maturity have different culinary purposes. The fleshy, immature green pods are fire roasted and referred to as green chile, while the mature red pods are dried and then either ground into powder or stored whole, often in the form of a hanging ristra.

The red chile I make for my wife’s potluck would be red chile the stew, as opposed to red chile, the sauce. The difference between sauce and stew can be little more than meat and veggies, like potatoes, cooked separately and then added to the sauce. But please, no beans.

A perfect red chile sauce can be made with no more than onions or garlic, butter, salt and dried red chile. Stock helps, as does bacon. Some people use flour or ground pumpkin seeds to thicken. Though simple to make, it’s even easier to screw up – even if you don’t add beans.

A few potlucks ago, I added chipotle powder to my wife’s red chile, because I was low on red chile powder. You really can’t skimp on chile powder. I know that. And I know the best red chile comes from northern New Mexico. The northern pods are smaller, with thinner skins, and are grown primarily to be red chile, which is much more practical to store through the winter than green. Many valleys and pueblos in northern N.M. have their own chile varieties that have grown accustomed to the specific local conditions. That caliber of red chile – the raw ingredient – would be a game changer in my red chile the sauce. Dried chipotle powder was a game changer too, but in the wrong way.

I can’t entirely blame my failed red chile on the powder, as that was merely one of many red chile fails involved. After adding the chipotle, I quickly panicked, adding olives and dried corn to make the dish less self consciously authentic but still regional, while grossly overcooking it. A guy from Albuquerque claimed my chile was passable, and when I heard that I lost all respect for him. It was just an embarrassment for everyone involved.

So the next time a staff party rolled around, wife didn’t ask me to make chile. She just issued a general request for me to make ... something. When I announced I’d be making red chile, she asked me if I was sure about that.

I used plain red chile powder from the store, careful to avoid the imposters that also contain spices. Of course I stayed away from chipotle and other nonsense and kept it simple, and it was much improved. But still, I wasn’t back to my glory days, she admitted. It was fine, but not exciting. It needed more butter, she offered. Perhaps I was trying too hard.

On a hunch, I searched the bowels of a packed away box and unearthed a package of Chimayo Traditions brand mild red chile powder. The town of Chimayo has the name recognition as the capitol of New Mexican red

chile, but there are many, many other farms in the region producing comparable red chile, such as the Santa Cruz, Escondido, Alcalde, and San Felipe varieties, named after their places.

I tasted the Chimayo powder and felt like I’d entered an oasis of color after living in black and white. Straight away I made a batch of red chile, the sauce, and it was glorious, with flavor that was both earthy and sunny at once. I wanted to drink it.

Assuming you can get your hands on some good, northern NM red chile – and I know you can on the inter webs – here is how to make a proper red chile sauce with it.

If you have access to whole pods, pull off the stem ends, pour out the seeds, dig out the membranes, and let the chiles soak in warm water, or preferably stock. After an hour or so, puree the pods, and some of the water, in a food processor, until it turns into a delightful, ethereal chile souffle?.

Prepare the pan with fat and aromatics. For the fat, I like a combination of bacon and butter, with olive oil as necessary. Wife would have me replace the bacon with more butter, but I ... can’t. Science is science, after all. Either way, about 3 tablespoons. For the aromatics, either a quarter of an onion or clove of garlic, minced, but not both. Garlic needs much less time, onions need to cook slowly for a while. Powdered garlic and onion can also be used, believe it or not, for a smooth and tasty finish.

At this point, many people would stir in a teaspoon of flour and make a roux in the pan that you can brown for a second and then add the chile water. Ground pumpkin seeds are a rootsy alternative to flour. I skip the thickener altogether, and simply add the chile water and carefully thicken it on the stovetop.

Keep it on low heat, being careful not to let it scald. It will sweeten as it thickens, and develop a bright tanginess. But if you overcook the chile it will turn bitter, so be careful. Start tasting it, seasoning with salt and oregano, preferably Mexican oregano, and perhaps garlic powder. Extra butter, in this case, is a seasoning as well. For an extra-smooth finish, pour the chile through a screen to filter out the lumps.

To enjoy the red chile in the New Mexican tradition, serve with the likes of enchiladas, tamales, beans, burgers and fries. In other words, anything.