Come to the dukkah side 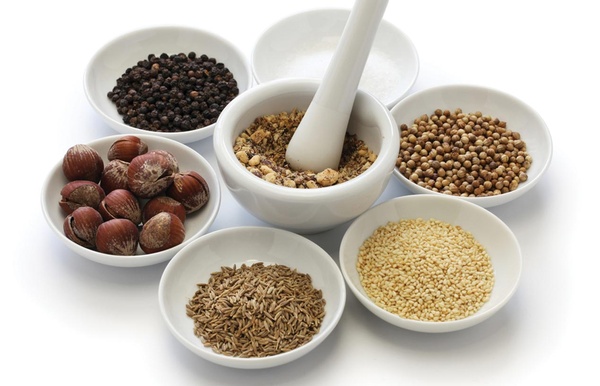 Growing up, I remember thinking it rather odd that the spice traders of yesteryear would subject themselves to such danger and hardship in search of cooking supplies. But life experience, such as when I recently found myself trapped in a kitchen with a glut of tomato sauce and cauliflower, has helped me to understand.

It was a perfect pantry storm, created by my having gone a bit crazy putting up frozen tomato sauce last summer, my wife having gone crazy at Costco with bagged cauliflower florets that were not going to last forever. Luckily, tomatoes and cauliflower are a great combination, but after a few laps around the track with the likes of butter and garlic, garam masala and oyster sauce, we were ready for something new. I busted open a tin of dukkah spice mix,
and my boring old ingredients donned a spiffy new outfit. Back in the day, that was the main point of spices. (That, and making spoiled food taste safe, but thankfully that’s not relevant to our story today.)

The transformation of the cauliflower was remarkable. It was a brand new dish, with seemingly brand new ingredients, but the only thing different was the spices.

The mixture’s many alternative spellings (duqqa, do’a, ???) are all derived from the Arabic word for “to pound.” This action applies to all the components except the sesame seeds, which are left whole. It is those seeds, as well as the pounded nuts, that set dukkah apart from most other spice mixtures. The seeds and nuts impart more than just flavor; they also impart body, substance and texture. The spices themselves, meanwhile, accentuate the savory flavors with an aromatic baritone. Those seeds and nuts are why in Egypt, dukkah is more than just a spice mixture. It’s sustenance. Along with some yogurt and flatbread, some dukkah in oil can be the basis for an entire meal. When times are especially tough, it is the entire meal.

Meanwhile, increasing numbers of big city menus and bigshot chefs are exploring the dukkah side.

Any dukkah worth putting up with has to contain cumin, coriander, sesame seeds, dried herbs and some kind of nut, such as peanuts, pistachios or almonds. Ana Sortum, of the legendary Oleana (and younger sibling Sofra) in Cambridge, Mass., prefers pumpkin seeds. Sam Risho of The Silk Road Global Tasting Experience in Missoula, Mont., which produced the dukkah spice mix that rescued my cauliflower, swears by Oregon hazelnuts.

“Roasted hazelnuts have a unique, rich flavor and good oil, but aren’t overpowering like peanuts” Risho told me.

Silk Road’s rendition of dukkah also contains fennel and black pepper, as well as mint, which gives it a strong herbal tone. The mix is aromatic and crunchy, and not at all sweet. Alas, Risho wasn’t at liberty to share the exact recipe.

“The ingredients are listed on the tin, in descending order,” he offered.

And he was more than happy to show me the secret within the secret to making any dukkah recipe, or any other spice mixture for that matter. As tricks go, it’s a good one. In the world of spice, teaching someone the ways of toasting is the equivalent of teaching a man to fish. Toasting releases essential oils, increasing the intensity of the spices’ flavors and helping to preserve the powder by coating it with oil, which keeps away the oxygen. The seeds can be toasted in many ways, including in the oven. Risho recommends the stovetop for the home cook, and demonstrated by roasting a batch of seeds and spices in roughly the same proportions as they appear in his dukkah mix. First he toasted the sesame seeds – not raw, but toasted sesame seeds, which are better preserved than raw thanks to their having been toasted. Again Risho toasted them, working the pan actively over the high flame, keeping the seeds moving, sometimes in a circular motion, then flipping the seeds towards him from the far edge of the pan like a thousand little pancakes, until the seeds were a darker shade of brown. He dumped them onto a plate and set them aside.

“The sesame seeds have to be added after everything else is ground,” he cautioned. “You don’t want to pulverize them or you’ll get a tahini.” There is more discretion, in terms of particle size, with the nuts, which can be crushed fine or coarse, or anywhere in between. In Australia, where dukkah is a popular bar snack, the nut pieces are kept large.

Professionals like Risho will roast each spice separately to absolute perfection, but the home chef can combine the fennel, cumin and coriander seeds in the pan together, as they all toast at roughly the same rate. Risho demonstrated, his hand working the pan, flicking the seeds from the back of the pan to the front, until the seeds browned and the air smelled like an exotic bazaar. He set those aside and added the black pepper, which took the longest; about five minutes. They were well worth the wait. As the black peppercorns toasted, they became softer and puffed out, like a very peppery Rice Crispie.

After the roasting demo, Sam combined the toasted ingredients in a dish, added crushed toasted hazelnuts and dried mint, and presented me with a stash of unground dukkah, to augment my supply of pounded dukkah powder. I took it home to my lab, where isn’t too much of a stretch to say, and in the research that followed, I consumed meals that could be described as dukkah-flavored dukkah sprinkled with dukkah.

Loosely following a recipe for dukkah-encrusted salmon with blood orange sauce from the Silk Road website, I coated a filet of wild-caught catfish with dukkah and salt (The Silk Road version of dukkah doesn’t contain salt; other recipes do).

Wild-caught catfish from Chesapeake Bay is a saltwater, invasive fish with a “Best Choice” rating from Seafood Watch and doesn’t taste muddy like a lot of catfish. It’s also really oily, a characteristic that is perfectly complemented by the dukkah.

As the fish fried, I added some of the deconstructed dukkah mixture Sam had given me to the pan. It sputtered pleasantly in the grease on low heat. Meanwhile, I made a sauce, mixing dukkah powder with yogurt, olive oil, salt, lime juice and minced garlic.

My dukkah fish and dukkah sauce were positively dukkah-liscious, but for extra dukkah-sity, I sprinkled some of the crispy unground seeds from the greasy pan and garnished them with parsley. The next morning, I scrambled eggs in the greasy leftover dukkah fish pan, and served them with my leftover yogurt garlic dukkah sauce, which is so good I could pound it any time, anywhere on anything.

The next morning, more deconstructed dukkah crackled in the pan, to be followed by blanched broccoli and eggs that had been beaten with yogurt. I served it with the yogurt dukkah sauce, because I could. Now I can see why people fought and died for spice.