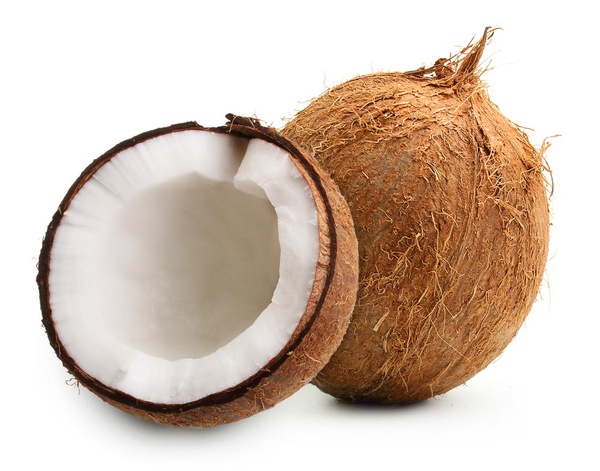 The coconut is one of the most important ingredients in tropical cooking. And fortunately for home cooks north of the border, the oily brown spheres are sold in most American supermarkets. So is ketchup. More on that in a moment.

If one were stranded on a coconut-strewn tropical island, coconuts could keep you fed and hydrated – assuming you have a machete with which to open them. The fresh water inside a young coconut is so harmonized with the human body that during World War II, coconut water was used as IV fluid in emergency situations. Thanks to the saturated fat they contains, coconuts also are a dense form of energy. And coconut has protein as well. The young, drinking coconuts are not readily available in the frozen north because they require refrigeration, but the older ones, which are used for cooking, have a much longer shelf-life.

This durability may explain the fact that coconuts colonized the many idyllic islands of the world by floating from one to an- other. Being designed to outlive a long journey at sea, a quick boat ride is nothing. Nonetheless, sometimes the flesh has gone rancid by the time you bring it home and open it.

That’s why I highly recommend smashing all new coconuts on the pavement outside the store, immediately after purchasing them. Keep a lightweight bowl on-hand with which to capture the water that will drain out, and give it a drink. If it tastes anything less than stellar, bring back the coconut and trade it for another. Nothing wrecks my buzz,
not to mention the gravy, faster than spending five bucks on a coconut only to discover at home
that it’s a dud. That’s why you must figure this out before leaving the premises.

Assuming you have a good coconut, the next step is to prepare coconut milk. Of all the many plant based “milks,” like soy or almond, coconut milk is the most milk-like, thanks to its saturated fat. Although refreshing and satisfying to drink, cooking is where coconut milk really shines. Fresh coconut milk will change ordinary ingredients into an extraordinary dish. Especially if you add ketchup.

Yeah, ketchup. All great fats have their traditional counterparts, and coconut is no exception. Cheese is famously balanced with wine, while butter is cut with lemon, which adds zing to the rich fatty backdrop. Bacon and eggs need coffee in order to taste proper, while olive oil is at its best when combined with vinegar. Coconut is its own fat source, and as such, demands its own acid. In the Eastern Caribbean, the acid of choice is ketchup. Or tomatoes, I should say. Fresh tomatoes and tomato paste are often used, but ketchup is preferred.

So with those bits of coconut theory under the belt, let’s dive into some practical concerns. Like what, exactly, are we supposed to do with our coconut and ketchup?

Preparing the milk is the heavy lifting in the preparation of a rich coconut gravy, which is fundamental to most coconut-based savory dishes. Nowadays, coconut milk is available in cans. It isn’t bad that way, but fresh is preferred.

In the tiny village of Petite Soufriere, Dominica, we had a cooking teacher named Audrey. Before retiring, she was a beloved school teacher, which made her quite the companion. Wherever we went, faces lit up as greetings were made to “Teach-um Audrey,” as she is called. After a lifetime of peeling and grating coconuts, Teach-um Audrey was happy to let my wife and I make the milk. We let her turn it into magic.

Hitting the coconut all over with a hammer, or the dull side of a machete, will loosen the flesh and make it easier to extract. After you get the flesh out, preferably without slicing open your hand, the next step is to grate the flesh. This should be done with the zesting side of a typical grater. Doing so takes a lot longer than it would to use the grating faces, but you extract more of the good stuff that way.

When the coconut white is grated, mix it with a cup and a half of water for each coconut in a bowl. Then, one by one, take little handfuls of the waterlogged coconut shreds and squeeze them into the bowl, and put the squeezed handfuls aside. If you have a mesh bag or fine strainer, use them to extract even more milk from the flesh. When all the coconut has been squeezed dry, the remaining liquid is coconut milk. I’ll leave you with Teach’um Audrey’s recipe for Codfish Sancoche, a popular Creole dish in Dominica. In addition to coconut and ketchup, it makes use of salted cod. Like a mature coconut, and ketchup for that matter, salted cod is stable at room temperature and requires no refrigeration. Thus, it’s a very inexpensive form of fish, and for that reason, as well as for its delicate salty flavor and flaky flesh, imported Canadian salt cod has remained an island favorite for centuries. It’s available online at Amazon and elsewhere, but if you want to substitute with the fresh fish of your choice, be it cod or something else, go for it. Any saltwater fish will do. Salmon is unexpectedly good in coconut gravy.

Remove salt from a pound of salt cod, either by boiling it for about 30 minutes or soaking it overnight. Drain, cover with a little water, and set aside.

Prepare coconut milk: extract and zest the flesh, add 11⁄2 cups water per coconut and mix it around and squeeze out all the milk. Set aside the spent flesh for the birds.

Simmer the coconut milk with whole cabbage leaves or paw paw (green papaya) for 30 minutes. Add saltfish, along with cut up seasonings like hot or sweet pepper, garlic, onions and turmeric (“If you get fresh it’s good. Otherwise powdered is fin.”)

And here is my favorite part of the recipe:

“Add ketchup to taste.” Add a bit, stir it around. Enjoy the warm red color and sweet, tangy flavor. Make further adjustments to the acid level by adding vinegar or lime juice. Boil for 30 minutes, and serve, with rice or plantains. Anything to soak up that precious red-gold gravy. You won’t want a single drop to go to waste.