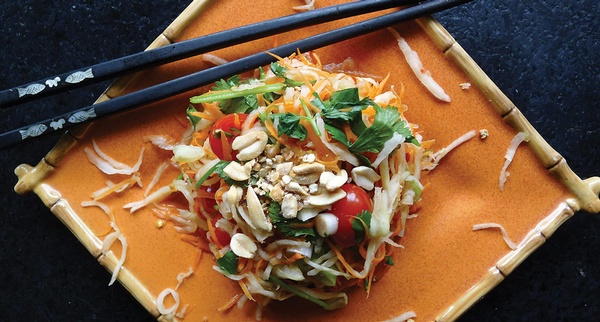 Everyone looks forward to tomatoes. We can’t wait for the peaches and corn. Some of us even get excited about zucchini. But who gets pumped for kohlrabi? Anyone?

It doesn’t help that a kohlrabi plant looks like a snake that recently swallowed a beach ball. The edible part is the swollen section of stem, an incongruously large growth in the neck of an otherwise small plant that tastes like the part of broccoli most people throw away.

Kohlrabi is perhaps most popular with farmers who are looking for some early season variety in their market displays, CSA boxes or farm stands. Thus, kohlrabi finds its way into the fridge and lurks there, for weeks or longer, never spoiling, never letting you off the hook.

If you take the time to peel one, you will be rewarded with a crisp, watery bite and a faint hint of spice, like a cross between jicama and a mild radish.

Sliced thickly on a veggie platter next to some dip, kohlrabi may never get a second chance. Sliced thinly or shredded, kohlrabi clings to sauce the way angel hair pasta does, which opens up many possibilities. My favorite way to use shredded kohlrabi is in som tum, a green papaya salad that is one of the world’s favorite Thai dishes. Green papaya are scarce in my parts, and kohlrabi so available I use it instead, along with shredded carrots. Salty, sweet, spicy, acidic, with a bitter garlic pungency and full of umami, this salad has something for every taste bud.

When I was in Bangkok, I spent some time seeking out the best som tum I could find, a mission that took me to a certain outdoor market on the edge of the city. I found my way to the section where stall after stall serves nothing but som tum. I bowed to a man with a bandana on his head.

The “som” in som tum refers to its sour taste, while the “tum” mimics the sound of the pounding of a pestle into a mortar. I’m not sure what I told this gentleman, or what he heard me say, but he nodded and smiled. Then he put a handful of small, living crabs into a tall wooden bowl, and started pounding. His heavy wooden pestle went “tum tum tum” on those crabs until they were a crunchy, gooey paste, to which he added spices and pounded some more. Then he ladled in some fish sauce, generously – the way you would want someone to add hot fudge to your ice cream.

The som tum maker swapped his pestle for a pair of wooden forks and added shredded green papaya, herbs and, for good measure, more fish sauce. He stirred it all together, scooped the salad into a paper bowl and handed it to me.

It was a bit fishy, and hot enough to burn a hole in the sun, but the rich array of flavors was dazzling. The beauty of this dish is how it balances flavors that are so intense that each one would be too overpowering on its own. But together they neutralize each other, like a mutually assured destruction in which the missiles are actually launched.

I respected that som tum, but between the fish sauce, high heat and mashed up crabs, I was in over my head. I didn’t take too many bites, but in looking into that abyss I learned something and returned to my quarters thrilled with my discovery.

Kohlrabi som tum can be an adventure too, if less cathartic. I call it kohl som, which translates to something like “Thai-style sour kohlrabi.”

When summer is in full swing, fresh cherry tomatoes will take this to the next level. You can also add chopped string beans and other forms of greenery too, as available.

1 baseball-sized kohlrabi, peeled and grated or shredded (about 3 cups)

1 medium carrot, grated (about a cup)

Up to 1 tablespoon brown sugar

Another option: sliced jalapeños instead of red peppers

Combine the kohlrabi, carrot, tomatoes, garlic and salt in a mixing bowl. Give the tomatoes a squeeze to crush them a little. Set aside. Combine the fish sauce, lime juice, sugar and chile flakes, and stir until the brown sugar is fully dissolved. Add this sauce and the green onions, cilantro and jalapenos, if using, to the mixing bowl. Toss the salad in the dressing, a little roughly to crush the tomatoes a bit more, and garnish with the peanuts.