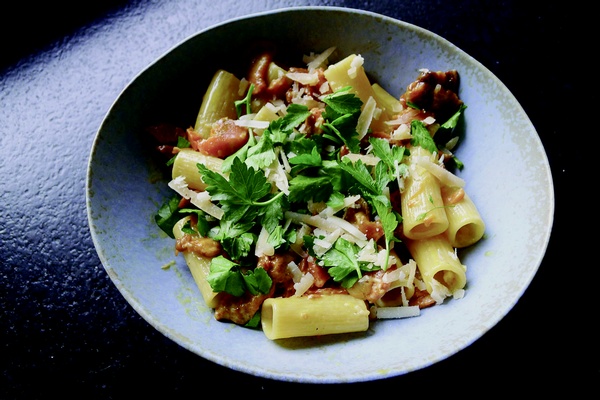 Many of my favorite recipes come from farmer friends. There is a pleasing elegance to farm cookery. It’s a cuisine forged by a land-based lifestyle and healthy, plant-based food – and lots of it. Farm cuisine is simple to prepare, able to tame the hunger that follows a day of hard work, and heavy on seasonal veggies.
In the winter, there are fewer fresh ingredients to work with, and farm cooks know how to convert the contents of a root cellar, pantry and freezer into a parade of interesting, nonrepetitive dishes. They can take a little longer to prepare, but nobody minds having the warm stove on. The result may not reflect the cornucopia of summer but hits the spot just the same.
Farm cooks pass around recipes like heirloom seeds. Each kitchen is a pristine habitat in which recipes can evolve. Among farmers, the DNA of a recipe can be conveyed in broad strokes. But as in a game of telephone, missing information can be replaced by an active imagination. Which is what accounts for the differences between Josh’s and Luci’s carrot pasta recipes.
Carrot pasta epitomizes what a farm cook might prepare in winter. Carrots are always in season, which makes this a go-to dish any time of year. Rich, sweet and full of fat and carbs, carrot pasta is what a human being wants to eat.
Josh first showed me the recipe, which he learned from Luci in a short phone conversation, and immediately went his merry way with. Luci learned it from her sister’s ex-husband, who learned it from his mom in Milan. Knowing Josh and Luci as well as I do, it’s fun to see how their differing personalities and circumstances shape different versions of the same recipe.
Josh has no prep cook, but a full cleanup crew. These circumstances allow him to tornado through the kitchen, which dovetails with the fact that he’s in more of a hurry. Less detail-oriented, his improv game is as fluid as a jazz soloist.
Luci is more of a craftsman in the kitchen and a stickler. If she needs a chopper, she’ll rope anyone within shouting range – which is quite a large area. By that time Josh, all by his lonesome with a podcast, will have already grated a load of carrots in a Cuisinart.
This recipe includes Josh and Luci’s renditions of carrot pasta. They are two sides of a similar coin, two data points on a graph of carrot pasta. Your job is to triangulate these to fit your lifestyle.
Carrot Pasta
Serves 4
1 pound pasta (“big noodles like rigatoni work better,” – Josh )
3 pounds peeled carrots, grated or sliced into coins, depending on your details
½ cup plus 2 tablespoons olive oil (Josh uses more than a cup but skips the cream, probably because he doesn’t have a cow like Luci does)
2 tablespoons butter (a rare point of agreement)
1 hot pepper, sliced in half, which Luci adds “at some point”
1-2 cloves garlic, pressed, minced or crushed
6 ounces grated Parmesan, Romano or blend of both
1 cup heavy cream (if you have a cow)
½ teaspoon black pepper
½ teaspoon salt
Optional: chopped anchovies, to taste
Garnish suggestion: parsley
Cook the carrots in a skillet on low heat with ½ cup olive oil. Josh cooks his grated carrots for about 30 minutes, which for him is an eternity, stirring often. Luci cooks her coins for two to three hours, stirring occasionally, until they nearly disintegrate.
The carrots will release water as they cook down and may spend some time submerged until the water cooks off. Winter carrots may not be too juicy, and you may have to add a little water to keep the carrots cooking long enough to properly break down. About 90 minutes in, when the carrot slices taste faintly like artichoke hearts, add 3/4 of the cheese, the butter, half of the garlic, and the hot pepper and anchovies, if using, and let it slowly caramelize with the lid on, stirring every 20 minutes or so. If it starts to solidify, add another cup of water and cover until the cheese dissolves.
Meanwhile, bring a pot of salted water to a boil and cook the noodles. Drain and, while still piping hot, toss with 2 tablespoons olive oil and the other half of the garlic. Set aside.
When the carrots and cheese have melted together, add the cream, if using, and salt and black pepper to the sauce. Mix, but don’t homogenize. Luci’s husband called me to make sure I understood this.
“When the carrot coins have almost turned into a paste, at the very end, you add the cream. It’s like when you add milk to hot cereal but don’t totally mix it.” His voice trailed off.
Toss the noodles in the sauce. Sprinkle the remaining cheese on top, garnish with something green, and serve.