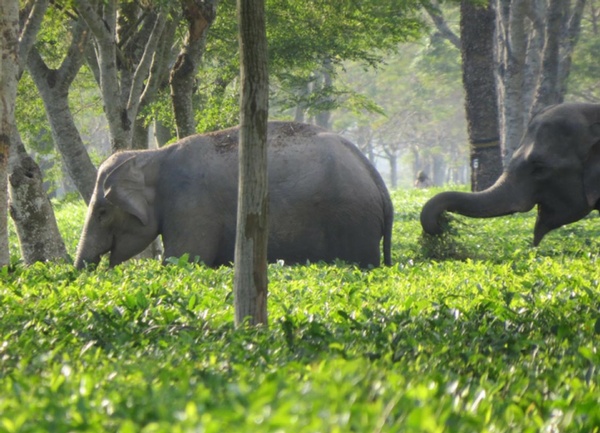 This time of year, when hydration is so important and enjoyable, we often take our tea chilled. But if my read of the seasonal tea leaves is correct, the days of steaming cups are fast approaching. With so many excuses to drink tea, it’s no wonder it’s the second most popular beverage in the world, behind water.

Half of all the tea in the world is grown by small farmers, which is remarkable in this day and age, when consolidation in the food and agriculture industries is the rule. Another key, yet unsung, player in a healthy tea industry is a massive wild animal with big ears that shakes the forest with its footsteps.

The preferred ecological parameters for growing tea, it turns out, are also favorable to elephants. Many Indian tea estates, large and small, and a handful of Chinese tea farms, are located in regions where those lovable megafauna still rumble about.

It all sounds cute and fuzzy, until the elephants are stomping on you. While they don’t eat the tea plants specifically, elephants often find themselves in conflict the tea growers. In the Himalayan foothills of Assam, in northeast India, loss of prime elephant habitat to agriculture and development means elephants now travel along their historic migration routes through tea plantations, where they too often get tripped up in irrigation ditches, risk electrocution from improperly installed fences or electricity lines, or ingest toxic levels of chemicals commonly used for growing tea.

In addition, many types of human stressors can make elephants aggressive and dangerous, and this can lead to retaliation toward elephants.

However, against this backdrop, one Assamese tea farmer, named Tenzing Bodosa, wanted to find a way to peacefully coexist with his pachyderm friends. Hoping for pointers, he got in touch with elephant conservationist Lisa Mills, whom he found on Facebook, and two years later, the world’s first “Certified Elephant Friendly” tea is available to drink. This label, and the projects it funds, grew from a partnership between the University of Montana and the nonprofit Wildlife Friendly Enterprise Network. The goal is to certify and market Elephant Friendly Tea from Bodosa and other farmers that care about the future of elephants, and the ecosystems they inhabit.

Certification is strict, with a long list of stipulations that a prospective farm must meet, and a portion of the proceeds from the sale of the tea is funneled into programs aimed at improving relations between elephants and people. “From farm to cup, we are doing things that feed back into the mission of the project,” Mills told me.

I recently sampled this elephant-friendly Assam, served chilled, at Lake Missoula Tea Co. in Missoula, Mont. On that dry and feverish day, the proprietor, a mustachioed rugby player named Jake Kreilick, poured me samples of all the chilled tea options in his fridge. Black tea has more caffeine, while green tea has more antioxidants, he explained, as if I cared. It was 99 degrees and smoky outside the tea house window, and I needed hydration. My first sip of Bodo Black Assam got my attention real quick.

I’m hardly an authority on tea, but having spent time in both India and China, I do know my Assam from my Oolong. The Bodo Black Assam, as it’s called, is smooth, with a mellow nutty flavor, and decidedly more sweet than bitter. So sweet, in fact, that I had to confirm its status. Kreilick gave a gravelly assurance of no added sweeteners.

Mills told me that she brought samples of Bodo to the World Tea Expo in Las Vegas this past June. Her intention was to generate interest by playing the elephant card, but various tea sommeliers (yes, there is such a thing) pushed her to enter it next year in the competition, based solely on the basis of its flavor. “Some of the words we heard repeatedly were ‘Earthy, smooth, sweet, and distinctly Assam,’” Mills says.

Is it possible, I wondered, that practices that improve the well-being of elephants also improve conditions for growing exceptional tea?

“Elephants are an umbrella species,” Mills says, “and if their environment is protected then the entire ecosystem benefits.” The perks of having elephants around include clean water, soils rich with microorganisms, native trees planted amongst the tea shrubs, natural pest control as birds and spiders inhabit the trees, and human-elephant coexistence as the tea pickers and planters accept the presence of elephants. “Tigers, leopards, hornbills and other endangered species now have a chance to survive too,” says Mills.

In other words, an elephant friendly ecosystem is a healthier ecosystem. Would it be that much of a surprise if a healthy ecosystem were to produce superior tea?

Of course, when iced tea is enjoyed for thirst-quenching purposes, quantity can be nearly as important as quality. Kreilick prepares several flavors of iced tea in 3-gallon batches and keeps them refrigerated. He uses 40 grams (1.4 ounces) of tea per gallon, and serves it chilled sans ice.

Here is the protocol: Steep 120 grams of tea (4.2 ounces) in a gallon of boiled water and let it sit overnight. In the morning, strain out the tea and dilute with 2 gallons of cold water.

Lake Missoula Tea Co. is currently the only distributor of Bodo tea, though it is available in select restaurants and tea houses around Montana. Another distributor is slated to open in Boulder, Colo. The rest of us have to order it online, at elephantfriendlytea.com.

As for Kreilick, he had another trick or two up his sleeve that day: a Creamsicle Crush, made with Chinese black, orange peel and coconut. The flavors seemed to go in multiple directions at once, but harmoniously, even thrillingly, so.

Alas, not every great tea will be great cold, he cautions. So before you jump in with a full 120 grams, you should experiment with small batches.

And if you want to attack your mouth with a whole different elephant ride through the jungle, consider blending Assam tea with alcohol. To get you started, just in case an elephant friendly Assam cocktail is up your alley, here is a recipe for Golden Tippy Assam Concentrate, developed by mixologist Gates Otsuji of The Standard High Line NYC Hotel. It was meant to be used in a drink called the Moonwalk, which itself was developed in commemoration of the 45th anniversary of the first human walk on the moon. It’s a smooth name, befitting that smooth, elephant-friendly Assam.

Brew an extra-strong batch of tea, 120 grams in 1 gallon, following Kreilick’s directions. Meanwhile, cube and muddle 2 cups pineapple with 3 cups of sugar. In the morning, rather than diluting the tea with water as one would for chilled tea, mix it with the pineapple concoction and let it sit another day, refrigerated.

To moonwalk like an elephant in your own home, mix 2.5 ounces of the Assam-pineapple concentrate with 2 ounces bourbon and an ounce of fresh lemon juice. Add a dash of Angostura bitters. Shake, strain and serve.