Embracing your bitter side 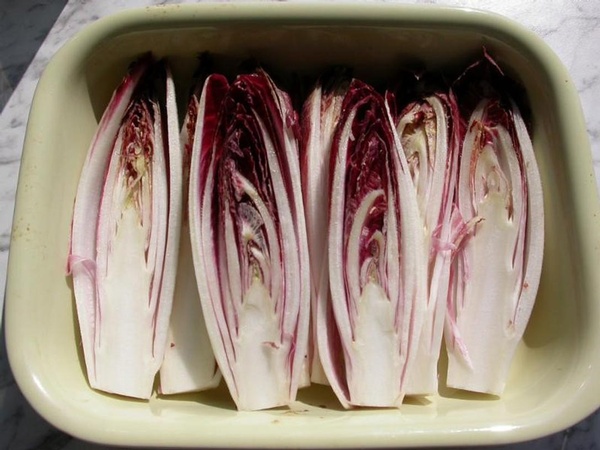 At a small vegetable shop in Milan, Italy, recently, I asked the keeper for radicchio. He inquired as to what I wanted to do with it, because he had several varieties. Was I planning to grill it? Serve it with pasta? Make a salad?

My Italian isn’t up to the task of explaining my simple plan: wrap the leaves around grapefruit sections, drizzle with olive oil, and eat them. Insalata, I said, thinking that was close enough. He selected a chioggia variety for me, and I got a grapefruit too.

This simple combination pairs the bitterness of the radicchio with the different kind of bitterness of grapefruit, creating a continuum of bitter that has the effect of dulling the flavor’s edge. The olive oil balances the grapefruit’s acid, which results in a salad dressing-like combination of flavors. Some nuts or grated hard cheese would have added complexity as well, but I kept it simple. I sat on a park bench and munched my insalata, and it was good.

Radicchio is also known as Italian chicory, after the broad family of crisp, bitter leafy plants of which it’s a member. In addition to radicchio, the chicory family includes endive and escarole, all of which are immensely popular in Italy. Some, like the Catalogna varieties, have thin leaves and robust stems, for which they are grown primarily. Others, such as cornichon endives, are grown for their roots, which are harvested in fall and buried in sawdust in a barn, and are then stimulated to sprout the pale, elongated heads known as Belgian endive. But most of this diverse lot are grown for their beautiful leaves, which range from purple to pink to green and yellow.

I was in Milan for the Identita Golose, a conference that celebrates Italian cuisine. In a lecture hall, where celebrated chefs spoke about their methods and philosophies, a background screen was lit up with a giant grilled radicchio. Not pasta. Not prosciutto, not wine.

The one pictured was the chiogga type – the most common variety found in the states. It looks like a rosy purple

cabbage. Perhaps, once, you brought one home out of curiosity, only to be repulsed by its bitter flavor.

Bitterness is a taste that we are hard-wired to reject. Babies will grimace when fed bitter foods. Conventional wisdom states that we are born with a distaste for bitternes. Bcause most toxins are bitter, this aversion allows us to steer clear of poison. But many good things are bitter too, and we learn to make exceptions, like chocolate, coffee and beer. In addition, many are just plain good for you. Radicchio, for instance, is full of vitamins and minerals, and is particularly good for certain acute conditions like high blood pressure and diabetes.

If you internalize these benefits intellectually, bitter foods can become less off-putting. As you explore the bitter side of food, you’ll realize it is not a single flavor but a myriad of tastes.

In the states, where the palate for bitterness has barely evolved beyond the examples that make you feel drunk, wired or loved, we tend to make bitter foods palatable by adding sweetness, like a honey balsamic vinaigrette.

That’s fine, but also a missed opportunity to embrace that bitter flavor and expand your palate. In the case of my little grapefruit salad, I essentially paired bitter with bitter and ended up with complexity. Rather than hide from bitterness, it can be thrilling to face it head on, and flex your taste muscles in the process.

My garden is essentially a chicory field in which I occasionally make space for other crops. I seed it with chicory varieties I purchase from Gourmet Seed International (gourmetseeds.com), which carries 22 varieties, all imported from Italy. In early spring, as soon as the ground thaws, I mix all my chicory seeds together and scatter them like grass seed, and then gently rake them in. The resulting matt of chicory acts like a ground cover and keeps the weeds down. If I feel the need to plant other things, like say a tomato, I look for a break in the chicory and plant it there. Or if necessary I create space by harvesting some whole chicory plants. Many of them grow well, including the romaine-shaped Treviso radicchio, and several other varieties of endive and escarole. The chiogga doesn’t do as well, but it’s possible that my wife just isn’t leaving them alone enough to let them flourish.

Alas, thanks to her insatiable appetite for these beautiful and bitter plants, my chicory garden is still not enough. She is like a one-woman locust, and when the plants are so beaten down that they need a rest, she’ll order chioggia by the case and eat them like apples, or dip the leaves into salad dressing like a chip into salsa. Her dressing consists of two parts olive oil and one part vinegar, with the vinegar portion being equal parts balsamic, cider and white balsamic, with soy sauce to taste.

To diversify my supply, I gave an assortment of chicory seeds to a farmer friend last year, in hopes that a variety or two might impress him, and his customers, to the point where he would grow large quantities. To his surprise, the chicory project was a success. One variety in particular, Pan di Zucchero, proved notably popular. The name translates into “sugar loaf.” True to its name, it’s not as bitter as other varieties, and when you peel off the outer leaves, the dense core is in the shape of a loaf of bread. My friend is growing a full row of Pan di Zucchero this year, and I’m happy for him. But for my wife and me, unfortunately, it’s not bitter enough. Perhaps after enough time, and exposure, his customers will stop referring to the taste as bitterness, and see it the way we do: flavor. Of course, if they embrace the bitterness too tightly, they might just develop a taste for wild chicory, aka dandelion, which is everywhere. And free.

Here is a simple Italian pasta recipe that uses chioggia, the most common chicory variety in the states and thus easiest to get a hold of. It’s a decadent dish, pink in hue and full of so much cream and cheese you won’t feel like you’re eating health food.

One pound of pasta, like fusilli, or some other textured noodle that really grabs the sauce

4 Tablespoons grated pecorino, or some other hard Italian cheese

Mince the onion and radicchio, and saute? in the olive oil. While that’s happening, cook and drain the noodles. When the onions are translucent and the radicchio is wilted, remove 3⁄4 of this mixture from the pan and puree with the cream and salt.

Add the noodles to the pan and saute? with the cheese and thyme. Add the pink sauce, stir around, and serve.