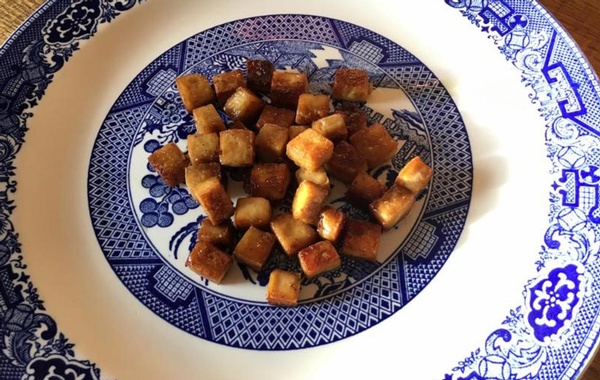 As the days get short and blustery, and we dig in for the holidays, I find myself pondering the Tofurky, and how we got here. The soy-and wheat-based cylinder was designed to resemble a stuffed turkey with gravy, and it would,
if a stuffed turkey resembled a plant-based cheese Combo.

Most vegetarians I know are confident enough in their vegetarianism that they don’t feel the need to go through the motions of ritually eating the faux roast beast to fit in. Like the kid in high school who wore a varsity jacket but didn’t play sports, public displays of faux carnivory announce your sense of inadequacy to the world.

In my experience, the vegetarians and vegans are often the best cooks in the room. If a cook is allowed to use bacon and butter, anything can taste good, but to satisfy an omnivorous body with herbivorous cooking is a trickier feat. That the meal resembles a dead animal is not a goal my vegetarians tend to share. I personally have not tasted the aforementioned Tofurky, but one vegetarian of impeccable taste, Uncle Gene, says Tofurky is “horrible tasting and acts like rubber.” He does, however, extol the virtues of the Tofurky company’s mushroom gravy.

The Hood River, Ore.-based Tofurky Co. has stuck around and grown for the last 37 years, expanding its product line
to include the likes of “Hasselback Baked Ham,” fake deli meats, vegan breakfast sausage, and more wannabe meats, sides and condiments. Some of them, like Uncle Gene’s gravy, apparently hit the spot.

There are so many other products, apparently, that the Tofurky itself is hard to find. It’s buried in the website’s “Holiday” category, one of 12, and the word Tofurky appears in none of the names of the three Holiday roasts. It kind of makes me wonder, who actually purchases Tofurky?

My guess is a lot of those sales are to holiday hosts who don’t know what to feed their vegetarian guests. By serving Tofurky on Thanksgiving and fake ham on Christmas, all the guests can go through the ritualized motions of Thanksgiving, from carving to stuffing.

I’m more of the camp that what vegetarians really want is vegetables. So I say, cook vegetables that look and taste like what they are, rather than like a carcass. Don’t worry about your guests’ protein levels. Any successful vegetarian knows how to manage that on their own.

Here are two recipes that will satisfy all of the vegetarians at your table, providing you make enough. That’s a big providing, because the carnivores will be on this too.

One, roasted roots, is as old as autumn. The other tastes like bacon. After all, vegetarians miss turkey once or twice a year, but they miss bacon every day.

My roasted roots technique is based on the potato, but several more roots can be added, such as carrots, celeriac, parsnip or yellow beets (red beets will make the whole batch look like it’s drenched in blood; you may not want that). Dense, greasy fingerling potatoes are my favorite for roasted roots.

Cut all the roots into to similar sized chunks so they cook at the same pace, and toss them in olive oil, salt, pepper and garlic powder. If you want to add herbs, like thyme, rosemary and sage, I don’t have a problem with

that. Spread the roots on a baking tray and bake at 350 until they are done, about an hour depending on how thinly they are sliced, stirring every 15 minutes or so. When the roots are done, add grated or pressed garlic while still piping hot, stir one final time, and allow to cool.

And here, finally, is how to make tofu taste like bacon: cook it with bacon. Then watch your vegetarian friends melt in a vat of ignorant bliss.

But if that is too sneaky for you, here is a way to get that tofu close enough to bacon that your guests will insist they need to take another bite, and another, before they can decide if it really does or does not taste like bacon.

Cut a brick of extra-firm tofu into half-inch cubes. I like to do it sloppily, so that the pieces are uneven, with thick and thin parts, but cubes are cool too. Add them to a pan on low heat, with about two tablespoons olive oil per pound of tofu. Cook as slowly as possible, stirring on occasion as the water cooks off, and a layer of brown builds on the flat sides of the increasingly dense, crisping pieces.

At this point you realize you should have made at least double the amount, because the tofu is shrinking, and every hand in the kitchen, from Jr. to grandma, will be reaching into that pan for those crispy bits.

If and when the olive oil disappears, add more. And again, until a thin layer of oil remains on the pan surface and the cubes are saturated. This is, after all, bacon we are going for. Add a few sheets of onion – large chunks from a single onion layer – to the pan, along with a clove of garlic, cut in half. These can be fished out later and disposed of in the chef’s mouth.

As the brown approaches irresistibility on all sides, sprinkle in light amounts of salt, pepper, garlic powder, paprika. At the tail end of cooking, add a teaspoon of honey per pound of tofu, or more, and soy sauce to taste.

Don’t worry about what to serve it with. Like bacon, these tofu bits can go on anything, from roasted roots to salad to a vegetable side dish. If they beg for your secret, tell them it’s bacon grease.