From lowly lentil to awesome rasam 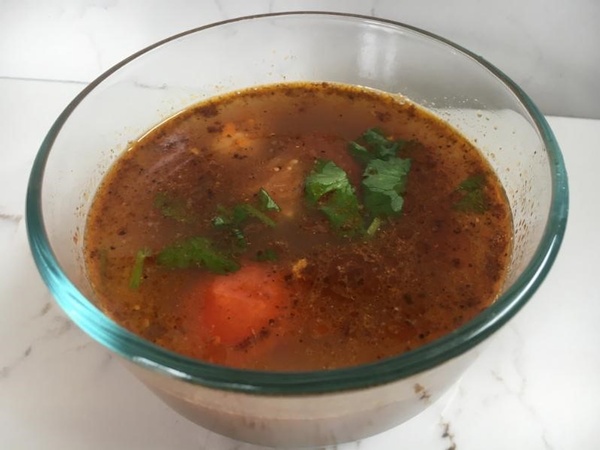 Iam SO PUMPED TO EAT LENTILS! Said no one, ever. At least in my bubble of America. But the more I look into this sentiment, or lack thereof, the less sense it makes. As I write these words I am full of lentils. Not bloated but satisfied, with a tangy, savory lingering aftertaste. Pound for pound, lentils represent about the most human nutrition one could wring from the earth. They pack more protein than any plant that isn’t soy and are easier to digest. A serving of lentils contributes huge amounts of folate, iron and other minerals, twice the antioxidants of blueberries, and about half your daily fiber needs.

Even a thin-soiled, poorly watered field can produce a crop of lentils, which is why entire societies have been built of their thick mortar. The tough determination of a lentil plant is appealing, and being legumes, each successive crop can improve the health of the soil. India, which grows more than 50 varieties of lentil and consumes half of the world’s supply, is one of the few places I’ve visited where vegetarian options are more appealing than meat-based, ones thanks in part to the lentil action.

In North America, most lentils are grown in the upper Columbia River basin, but they are migrating east. In the northern plains, farmers are planting rotations of lentils to build soil and break disease and pest cycles. Some are switching to lentils entirely. Being so good for the soil, the lentils themselves are almost a bonus. And something similar can be said about lentils in the kitchen: a lentil-based meal need not contain many of them.

Unless you are cool with a bowl of green-brown bland gruel that may also be too crunchy, it’s worth mastering a few basic concepts of lentil cookery. Sometimes I want more lentil power and less mush, and that’s when I make a pot of rasam, a soup based on the cloudy water leftover from cooking lentils. It’s analogous to the making of a bone or vegetable stock. Eventually, the carcass gives up so much of its goodness that it’s essentially spent, devoid of flavor and nutrients, all of which fled to the broth.

Deep down, everyone feels a nourishing vibe from lentils. But sometimes, the soothing lentil flavor for which you thirst in your bones can be elusive to conjure into the kitchen. I find the flavor and feeling of rasam, a South Indian drink or soup, is what I want from lentils. No less fulfilling than a bowl of chicken soup, rasam is made with lentil broth, flavored with ground spices and two sources of sour, and balanced with fat and a fragrant garnish.

I learned about rasam from a yogi named Norman, who lived in India for decade, earning a Masters of Indology from the University of Mysore. Rasam soup, Norman explained, is something of a power drink for Brahmans, whom are the elites of the caste system. The caste system is messed up but doesn’t change the fact that Brahman food can be dazzling. They drink rasam multiple times a day.

Every South Indian cook will have his or her own recipe for rasam spices. Norman’s rasam is so respected that he actually ships it to Southern India. That’s basically like importing olive oil to Italy.

In addition to the lentil water and spices, what makes rasam so electrifying is the combination of sour from both tomato or tamarind. When Norman taught me the ways, we happened to be standing under a tamarind tree and made a paste of fresh tamarind pods mashed in water. For those without fresh tamarind, Knorr brand tamarind soup powder is a great substitute. Mix a tablespoon of that powder into a cup of water for each batch of rasam.

The tomatoes can be fresh or from a can – if so, include the water. I use my frozen roasted tomato sauce. If you don’t have tomatoes and tamarind, you can substitute for one of them with fresh lemon or lime juice. It won’t be the same but will be good.

As for the spices, Norman claims to not use exact proportions, but I can get you close enough. In a heavy pan with no oil, toast a tablespoon each of cumin and coriander seed, two tablespoons mustard seeds (yellow and/or brown), a teaspoon of black peppercorns, and five fenugreek seeds (careful, they are bitter!) Keep the pan moving, toasting until the mustard seeds start to pop. Crush the spices in a mortar & pestle or spice grinder, along with powdered red chile pepper. That is your rasam powder.

To prepare the lentil water, soak a cup of lentils in water for 10 minutes. Stir, discard floaters and water, and add 2-3 quarts of cold water. Simmer 30 minutes. Split, aka decorticated lentils have their skins removed and cook faster, producing a creamier broth. Whole lentils, like black beluga, produce a thinner, darker broth that’s no less rich.

When the lentil water, spices and sour flavors have been assembled, heat a pan with oil or butter on medium heat, and add half an onion, flat side down, along with the tomato, tamarind water and 3 or so tablespoons rasam powder. Bring to a simmer and add the lentil water. Simmer. Adjust salt. Maybe add some garlic powder (and fresh curry leaves if you have them).

That’s about it. At least, that’s all it needs to be. But this point is also a gateway of sorts. Rasam can be a base in which to cook veggies, like cauliflower or potatoes. You can also add some cooked lentils back to the rasam to make it thicker, or make rasam with more than one type of lentil.

Just don’t be afraid to add fat – it’ll balance the acid and spices. Butter or ghee are traditionally used. Coconut milk is amazing. Bacon, inexplicably, not so much. I serve it simply, in a bowl with chopped cilantro and a dollop of mayo.

As for the lentils, that dense, mushy byproduct from the preparation of lentil water, I sneak it into things. Scrambled eggs handle it well – especially yellow lentils – as does tomato sauce. Of course, you can make dal. I’ve been enjoying a hummus-like dip, made in the food processor with olive oil, fresh garlic, tahini, salt and lemon. For extra flavor, I look no further than my fresh rasam powder.