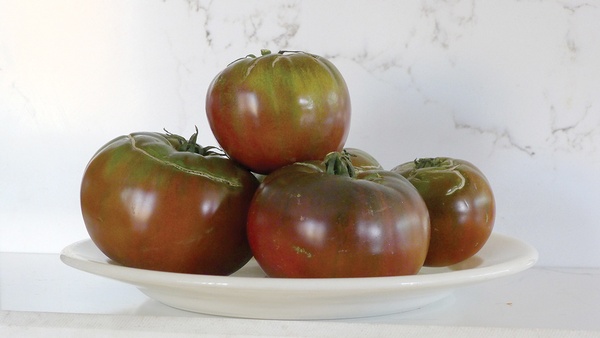 The most elegant cooks I know are farmers. Not elegant in the sense of overly stylish, but rather in the way a scientist discusses a solution or experiment that is so ingeniously simple it’s beautiful.

When summer is in full swing on a farm, each meal is an elegant response to some burning questions. How do we feed an army of hungry bodies, without too much kitchen work or cleaning, while using as many free ingredients as possible? By “free,” of course, we mean home-grown produce, especially the stuff that is so in-season the surplus couldn’t possibly all be sold.

Over the course of a summer, a farm kitchen becomes a lab for the evolution of culinary elegance. Visitors bring their own recipes, which take up residence in hospitable kitchen ecosystems, like the one I walked into the other day.

I was there to learn about a salad called heirloom tomato juice, but first I had to get past a table laden with two steaming platters of rice noodles tossed in chimichurri. The noodles were unevenly tossed, with some patches that were almost pure green and scattered flecks of caramelized carrots and pieces of grilled fennel, broccoli and yellow squash.

“It was a way of getting rid of too much parsley,” my friend Josh, a farmer and local county commissioner, said. Having spent time in the Peace Corps in Thailand, he knows his way around a fried noodle.

Also on the table: a large bowl of romaine, tossed with onions that had been soaked in salt water. The lettuce and onions were drizzled in olive oil and “cheap white vinegar.” It had the fingerprint of a mutual farmer friend, and the Commissioner confirmed it was indeed her recipe.

First, the Commissioner sliced an English cucumber, the long, slender kind we sometimes see wrapped in plastic. It has to be this and only this kind, he stressed. Not the cucumber slicers, even from his own farm, or the pointy picklers, no matter how crispy. None surrender their juices like an English.

He spoke of the juice with a mix of reverence and fervor, his values having been fundamentally sculpted by the quest for juice. Things that increase the juice, by definition, are good.

“I’m not shy with the salt,” he said, shaking copious amounts onto the chunked cukes. “It makes things taste good. And it brings out the juice.”

Then he added thin slices of onion. It must be a Walla-Walla or similar sweet, spicy salad onion. He teased apart the thin rings into a layer atop the cucumbers and gave it a good stir. Then he added the tomatoes, in chunks about the size of a pack of dental floss.

There is a little more leeway with the tomatoes. They should be heavy, ripe heirlooms. Cracked and ugly tomatoes are welcome, and the darker, the better, like the green collared Cherokee Black.

As this went on, family and farmhands wandered through the kitchen, ogling the growing spread. When the Commissioner told them my purpose – heirloom tomato juice – they sighed wistfully, reliving their encounters with this summertime salad. But they all declined to taste-test the Commissioner’s fresh batch, with variations on, “I can’t eat any more tomatoes right now.”

The Commissioner nodded sympathetically, pointing to his lower lip. “I have a hole in my mouth, too.” After weeks of rushing face first into the tomato harvest, the acid was taking its toll, even with the low-acid heirlooms. Nothing says dog days of summer like tomato herpes in your mouth.

When the three principal ingredients had been chopped and added to the bowl, the Commissioner poured olive oil and balsamic, and stirred. “Let them hang out and get to know each other for a few minutes,” he said.

A moment later, he announced, “It’s already making juice. I can see it coming up.”

The cucumbers were sinking in a rising sea, so fast you could almost see it happening.

When the Commissioner ran out to the greenhouse, I started gulping it down. The juices were thick but non-pulpy, softly tangy and salty, thoroughly satisfying and delicious, like drinkable gazpacho.

By then the tomatoes had all but vanished, as had the onions. The cucumbers remained, like bones in a pot of simmering stock, having already given their best stuff. Eat them anyway.

Don’t be afraid to double the recipe. Leftovers are A-OK.

Serves 4
2 English cucumbers, sliced into 1⁄2-inch rounds
1⁄4 of a large sweet onion, thin sliced to an 1⁄8-inch or less 3 cups chopped heirloom tomatoes
1⁄2 cup olive oil
1⁄4 cup balsamic vinegar
1 tablespoon salt
Add cucumbers to a bowl, along with 2 teaspoons of salt and the onions, teasing the layers apart into individual crescents. Toss. Add tomatoes, oil and balsamic, and toss again. Taste, add the remainder of the salt if needed, and wait for the juices to flow. It won’t be long.