Getting to the heart of the matter 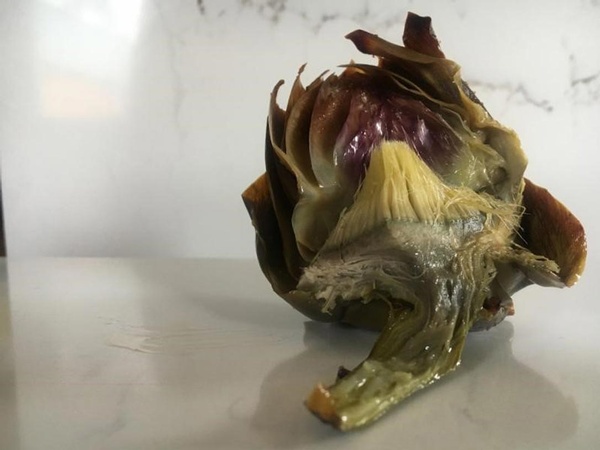 This is the time of year when artichoke fans have two reasons to cheer. In Mexico and the southern U.S., the harvest has already begun. Artichokes, in other words, can already be found in stores. Meanwhile, at farmers markets of all latitudes, purveyors of bedding plants are selling potted artichokes for the garden. Even in Montana, the summers are getting hot enough that these Mediterranean members of the thistle family need to be planted a full 5 feet apart.

The buds are harvested before they turn into flowers. Unless, of course, you prefer to allow them to flower and look at rather than eat them.

Myrna Varner became an artichoke grower when a vendor gifted her a little plant as she was buying tomato starts. Now she grows three plants a year, and they produce later into  the fall than the tomatoes. “I’m ready to tear the garden up and they were still bearing,” she told me. Yet she doesn’t even eat them. “We get such a kick out of watching them grow,” she says. Some get eaten by friends and family, while some of the buds are allowed to open into large purple flowers.

“It is good for a man to eat thistles, and to remember that he is an ass,” Enaus Sweetland Dallas notes in his 1877 book Kettner’s Book of the Table: A manual of Cookery, Practical, Theoretical, Historical. “But an artichoke is the best of thistles, and the man who enjoys it has the satisfaction of feeling that he is an ass of taste. There are several elaborate ways of dressing the artichoke – the Barigoule way and Lyonnese way, for example.” He doesn’t expand on these fancy pants methods, other than to call them, “... frantic attempts to paint the lily and to perfume the violet.”

I haven’t delved deeply enough into the literature to determine what he means by ass, and why asses eat thistles. But I think Dallas is spot-on in his less-is-more approach to artichokes.

“Depend upon it,” he concludes, “that the simplest way of dressing the artichoke is the best.”

Dallas recommends boiling the bud, but there is a case to be made for roasting. I enjoy the caramelized flavors and the layers of texture that can result. I like roasting artichokes so much, in fact, I roast them twice.

First, I lay the artichoke on its side on a cutting board, and give it a flat-top with a big, heavy knife, slicing a round flat plane an inch or 2 from the tip of the artichoke. This reveals a cross-section of green, purple, pale yellow and burgundy leaves. Trim the stem to within 2 inches of the bottom.

Place each head in a baking container in such a way that it can stay upright – by upright we mean flat side up. Wide mouth pint jars work well. The artichoke looks like a flower in a little vase. A Pyrex measuring cup does the same thing. A banana bread pan holds two large artichokes, side by side. If you don’t have anything that will work, trim the bottoms off so they sit flat and upright unsupported, and wing it from there.

Put a half-inch of water and a clove of garlic at the bottom of whatever container you use. Give a solid shake or two of salt onto the top of each artichoke, followed by two table-spoons lemon or lime juice, poured slowly enough that it seeps down between the leaves. Then slowly pour in about a third of a cup of olive oil per large artichoke. Cover each artichoke in foil, pressing firmly on all sides to make a seal between the foil and the thing that’s holding the artichoke. With the water in the bottom, you are basically constructing a steamer.

Place the upright artichokes in their holders in the oven at 350 and bake (jars should be placed on a tray or skillet in case they tip). As it cooks, the oil will find its way down through the vascular tissue of the bud, out the stem and into the water below.

After an hour, carefully remove the artichoke and holder from the oven, and remove the foil. When it has cooled enough to handle, gently pull the leaves away from the center, loosening the bud. Pour the lemon oil from the baking dish into another container, and then pour it back into the half-baked artichokes, and put it back in the oven with the foil off, so the outer leaves get crispy as the center melts into a molten core of flavor – about another hour. (Or keep it wrapped in foil for a shorter cook time).

I ate two entire artichokes before it hit me that I hadn’t encountered any of the dry, spiny and generally unpleasant chokes usually found at the center of an artichoke. I consulted Dallas on the matter. He spoke in riddles. Ass riddles.

“Some French cooks, before sending the artichoke to table, are careful to remove the choke, or as they call it, the hay. For this purpose the artichoke must either be allowed to cool, or must be dipped in cold water, and heated again after the removal of the hay – which might too vividly remind us that we are asses.”

Ultimately, he leaves the hay question unresolved. “That hay in the artichoke certainly raises a delicate question, and it must be left to the good feeling of cooks whether they will or will not send it up to table.”

Most cooks today remove the hay, but I leave it in, because sometimes the hay is edible. The chokes of young artichoke buds are fully edible and become more fibrous and prickly as the bud matures. The artichokes I’ve been buying and eating this spring have been large, but still young at heart. Perhaps it’s because the season itself is still young. In any case, given that sometimes the chokes are completely edible, even in a big artichoke, I would leave them in. Work around them if and when they become a problem.