Getting vichy with it 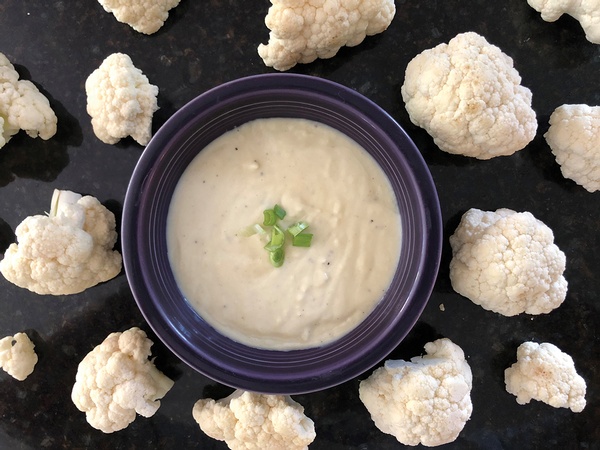 I once came home with a head of cauliflower with a stem that was so big, something had to give. I didn’t want to slice it into a stirfry or grate it into a salad like a jicama. I wanted to change the world.

A cauliflower stem isn’t celebrated like the curdled crown it supports. Despite having the same flavor as the florets, and similar nutritional value, the stem is a pedestal for the trophy, with fewer pathways to glory. But I have learned that this less charismatic part of the plant can be just as glorious, perhaps never more so than in a pot of vichyssoise.

I’m hardly a traditionalist in the kitchen, but I believe there are some recipes, for some dishes, with which you shouldn’t mess. I once thought that vichyssoise was one of them.

I remember reading, in Kitchen Confidential, about how a bowl of vichyssoise bewitched Anthony Bourdain and drew him into the world of food. Smooth and simple, served cold with a few flecks of black pepper, vichyssoise is a unique assemblage of flavors. What Bourdain tasted was likely similar to what Julia Child taught, which was based on the same recipe the French military used during the war to cook vichyssoise for 100 men. It does not contain herbs, unless you count the chives on the garnish, which harmonize with the leek and onion – fellow members of the
allium family – already in the dish. It is quirky rules like this, along with the blender action, fridge time and heavy cream, that makes vichyssoise so classic. I knew it was probably wrong, but the more I thought about adding cauliflower stem, the more I knew I had to do it.

Most cauliflower stems you will encounter are not large enough to make a vichyssoise, so you have to augment as necessary with florets. But it still allows you to make a nice pot of chilled soup and still have cauliflower  cream. With less or no added cream, the flavors of the individual components are more vivid. It’s like hanging out backstage with the leeks and other allium varieties, along with the black pepper, butter and of course the cauliflower, but with their makeup off, so you can see who they really are. Just as smooth, but less polished.

In deference to the purists, I will try to refrain from calling my potato-free dish “vichyssoise.” But I can’t do anything about the fact that my cauliflower vichyssoise is better than the classic that spawned it. Nor would I care to.

The version with both potato and cauliflower is relatively bland and thick to the point of being sluggish, especially compared to the ethereal elegance that the cauliflower version brings to the table. That potato-free rendition is like a new expensive bicycle, just as sturdy as the old one but made with lighter materials, supported by fiber and emulsion instead of potato starch. Unchained by those earthy, heavy potatoes, this chilled cloud is ready to soar.

The cauliflower outworks the potato in terms of flavor too, adding vegetal complexity without making it taste any less like vichyssoise. It also adds an unexpected creaminess that is completely distinct from the potato-y thickness of the original. This creaminess is so creamy that there is no need for cream, and each time I make cauliflower vichyssoise I use less. In a side-by-side, the cream-free version won me over. It’s creamy enough, and the flavors of the cauliflower, black pepper and allium plants resonate more clearly in the absence of cream.

Is it still vichyssoise? Probably not. But it’s good. And it’s vichyssoiseesque. Which is probably the closest I’ll ever get to speaking French.

The cream is totally optional, therefore the amount completely subjective. Fortunately, it’s added last, so you can add it to taste and perhaps even conduct your own side-by-side. Other than subbing cauliflower for potato, the only other deviation I take from traditional vichyssoise – and with all due respect to the elders of potato-leek soup – is my use of yet another allium: garlic.

Makes 8 one cup servings
6 cups chopped leeks (white and light green parts)
6 cups chopped cauliflower stems (supplemented with crowns, as necessary)
1 stick (4 oz.) of butter
1 small onion
3 cloves garlic
1 - 2 teaspoons crushed black pepper, depending on taste (it’s the only spice, so it’s OK if it stands out as a little “peppery”)
1 teaspoon salt
4 cups chicken stock (or veggie stock)
1⁄4 cup cream
Chives
Saute? leeks, cauliflower, garlic and onion in the butter with salt and pepper. When the onions and leeks are softened and translucent, add the water/stock. Simmer for 20 minutes, adjust seasonings. Let cool to room temperature, and blend. Stir in cream, put the finished vichyssoiseesque in the fridge and chill. Garnish with minced chives and serve.