Grapefruit is a great fruit 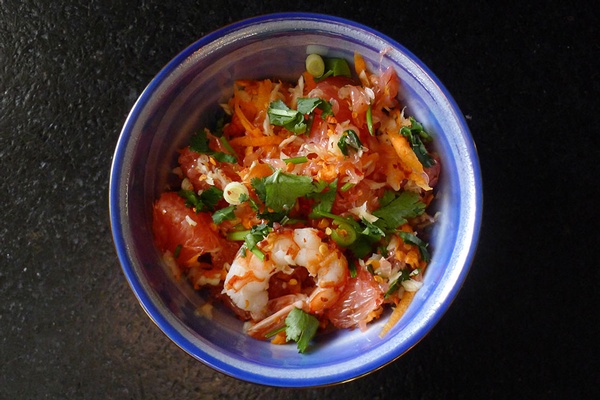 Texas grapefruit are in season and on sale at my local bodega. The ruby-fleshed, bittersweet orbs looked shrunken and beat up, which is not necessarily a bad thing. On the contrary, it may mean they are ripe.

My dad made sure his son knew how to choose a grapefruit, and he would have been excited by the contents of this bin. His technique is to press on the bottom – if the skin feels thin and you can press it in, it’s ready. If the skin feels thick and spongy, it’s not perfect. In my experience as a grapefruit chooser, the old, dented grapefruit like the ones I was digging through often fit that bill. I gently prodded the bottoms of these marginal looking grapefruit until I had about 15.

At home, I peeled and opened one, and saw the confirmation I was looking for: the membranes between sections had ripped open when I pulled the fruit apart, revealing the pink juicy vesicles inside. In less ripe specimen, the sections would separate from one another, but not split open like the mouths of hungry baby birds.

Once you get the hang of assessing grapefruit by pushing on their bottoms, you’ll realize how rare it is to find a grapefruit that is ready. Most, it seems, are harvested too early. Maybe the grapefruit merchants figure that people expect them to be a little too sour and a little too bitter. Those same challenging flavors are evident even in a perfectly ripe one, too, but are balanced by enough sweetness.

The bitterness of grapefruit contributes to its medicinal aura, as most medicines are bitter. The high levels of vitamin C are important too, but the medicinal qualities unique to grapefruit are in that bitterness. “I eat grapefruit when I feel sick,” noted a friend of mine recently. “It just feels like it will help.”

Grapefruit seed extract is a popular plant-based remedy with demonstrated antimicrobial and anti-fungal activity. Meanwhile, people with certain health conditions, like high blood pressure or high cholesterol, are well aware that they can’t eat grapefruit when they are on their medications. Grapefruit in your system will make certain drugs more potent – potentially dangerously so – by inhibiting the breakdown of those medications, allowing them to accumulate in the blood. (If grapefruit is your medicine of choice, I guess you don’t have to worry about that effect.)

The intense bitter, sweet and sour flavors in grapefruit allow it to hold its own when mixed with other strong flavors. In this Thai shrimp Salad that I learned about on an island in the Andaman Sea, the assertive and complex flavor of the grapefruit is countered with the likes of garlic, cilantro, fish sauce and hot pepper flakes. It makes for an exciting salad that’s exotic and in season all winter long.

I first had this dish in Thailand, where it was made with pomelo, a large, grapefruit-like fruit. Alas, the thick, heavy skin of a pomelo drives up the cost significantly if you are paying by the pound and also makes it difficult to do my dad’s assessment. I’ve also swapped the shrimp for imitation crab meat, which works fine. Like other Thai salads, this one contains no oil.

Assuming you have chosen a ripe grapefruit, the juicy vesicles will come right out of the loose membranes with little effort.

4 grapefruit, peeled and de-membraned (I eat the membranes)

Combine the lime juice, soy sauce, garlic, fish sauce, chile flakes, salt, sugar and any grapefruit juice leftover from the peeling process. Add the cooked shrimp and keep it there until it’s time for the final mix.

Grate the carrots and cabbage, and combine in a large bowl with the coconut flakes, cilantro and peeled grapefruit sections, whole or broken into odd-sized clusters of juicy vesicles.