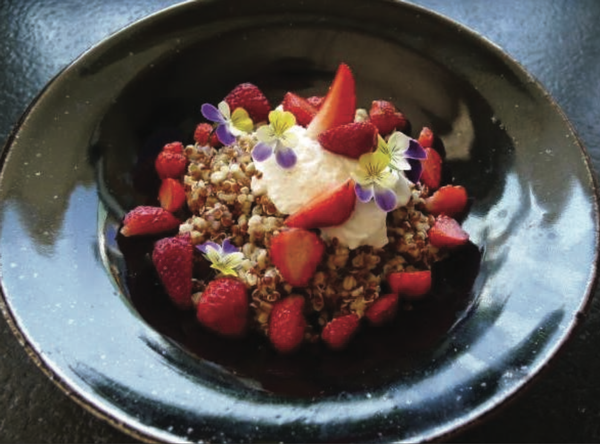 June was so productive in the strawberry patch, we almost ran out of ways to use them. This inspired me to consult Sarah, a friend who has a way with steel cut oats and quinoa, an unlikely combination that she eats almost every day. I had tried this delightful mix, and thought it would be good underneath some strawberries for breakfast or even desert. She has given the unfortunate name “gruel” to this fibrous elixir and isn’t changing her mind.

“I like that word because it sounds like Dickens,” Sarah told me, knowing full well that what she makes isn’t gruel.

Porridge and gruel are two points along a spectrum of boiled grains that can be cooked and served with fruit. Porridge is thicker and has a better name, derived from an old world style of one-pot cookery called potage. Porridge has a homey, comforting sound that takes you to a world where the only concerns are too hot, too cold, but things are usually just right.

Gruel, on the other hand, is what babies, refugees and hippies eat. The sound itself is unappetizing and rolls off the tongue like wet cement. As the inspiration for the word “gru-
eling,” gruel implies that eating a bowl of it is some kind of ordeal. Sarah’s gruel is on the
thick side of porridge, more like a pot of cooked grains than a liquid and has no business being called gruel.

But it sure is great served cold with strawberries and yogurt. It also has a place in savory dishes too, in the spirit of fried rice or grain salad.

I suppose that when you have as many glass jars filled with seeds and beans and nuts as Sarah does, you can call your potage whatever you want. But I’ll be calling it potaggio, a nice Italian name that also gives a nod to the Latin root of potage.

Sarah’s potaggio, a mixture of quinoa and cut oats and special tweaks like hemp seeds, offers a pleasing nutty flavor and just the right amount of resistance to the tooth. It’s light, mild and fun to eat, and there is a long tradition in the mixing of grains, fruit and some dairy product. This widespread motif includes cobbler with ice cream, and the tried-and-true granola with fruit and milk, not to mention bread with butter and jam. Even a berry cheesecake, with a crust based on finely ground wheat, would qualify.

When I put together a plate of fruit, cream and potaggio, I need sweetness and sourness to be involved. If you have a sweet/sour sauce like chokecherry syrup, that’s ideal. Otherwise, mix lemon, sugar and chopped cherries into a sweet, tart dressing.

I usually cook my potaggio unsweetened, so the sweetness we add is the sweetness we get, and everyone likes a little. But the tartness I serve it with is an unexpected game changer, making the whole dish more interesting and balanced.

The balance between quinoa and steel cut oats is essential to potaggio. They both cook to perfection in the same amount of time, each arriving at a place that complements the other. Quinoa cooked to this point would not hold together alone, but the steel cut oats add their moisturizing soluble fibers, which some might call slime, which binds the quinoa together. By absorbing this stickiness, the quinoa gives the oats a lighter, drier feel.

A pot of potaggio holds together with the ease of a pot of rice. It can be served warm, but chilled is good too, and it pairs gloriously not only with strawberries but blueberries, cherries and other sweet joys of summer, including, presumably, peaches.

Sarah doctors her potaggio with smaller amounts of hemp, chia and sunflower seeds. I started there and began exploring a range of tweaks. My favorite, so far, is to customize with hemp and sesame seeds.

The ways to add sweet and creaminess are obvious, but it’s worth noting that potaggio can make the base of a great savory meal. My favorite savory potaggio is dressed with what I call Wild Rice Dressing: three parts soy sauce and one part toasted sesame oil with mashed garlic and ginger and minced green onion or scape.

Potage, pottage, porridge and other versions of the historical dish upon which potaggio is based, is more of a general process than a specific recipe. It’s also known as the original one-pot meal. Which is to say, cook it slowly in a pot, don’t burn it, and add water when necessary. It is from these guiding principles that Sarah derived the potaggio process she conveyed to me. It’s a satisfying, tasty substrate that can carry a lot of sauces.

You should definitely explore ways to augment the quinoa/oat base and find your own gruel groove, whatever that may be.

About 10 servings
1 cup steel cut oats
1 cup quinoa (I prefer red quinoa, for the color) 4 cups water (plus more at the ready)
1 tablespoon untoasted sesame seeds
1 tablespoon raw, shelled hemp seeds
Pinch of salt
1 scoop per serving of plain, high-fat Greek yogurt or similar
1 cup berries or fruit for each bowl
A sweet and tart syrup like rhubarb, cherry or chokecherry
Cream (optional)
Add all of the ingredients to a heavy-bottomed pot, about 4 quarts in size, and bring to a boil. Bring down to a simmer and let it sputter slowly for about 20 minutes, until the grains have all swollen and softened to the point where they feel good to chew. The water may disappear before you get there, so be prepared to add more. Don’t over-stir, but keep track of what is happening on the bottom of the pan. When the grains are good to chew, turn the heat to low and slowly let the water cook off. Turn off the heat and let it cool to room temperature and store in the fridge.

For the berries-and-cream version, serve chilled, topped with yogurt and an abundant quantity of berries and a sweet/tart sauce. Don’t let them mix until the ingredients are on the spoon or in your mouth. Just as you wouldn’t stir a plate of cheesecake into a sloppy mess before eating it, a dish of fruity potaggio is best served and eaten deconstructed. And drenched in a sweet, tart syrup, of course.