Hamburgasms: No need to fake anymore 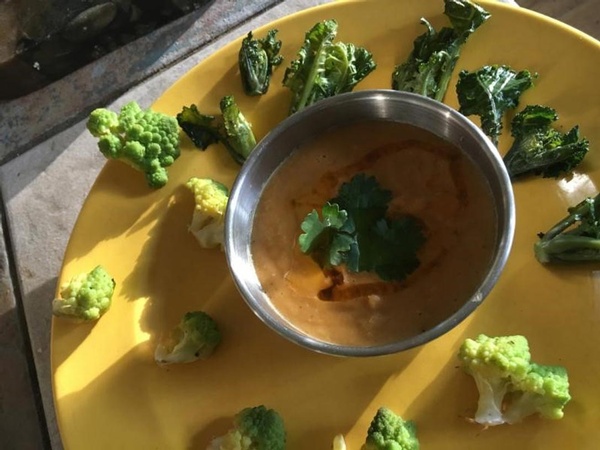 I have tasted the future of fake meat. Amazingly, it did not suck. It’s been a year since the Impossible Burger made its debut, after five years of buzz. From the beginning, the Redwood City, Calif.-based Impossible Foods, which makes the plant-based burger, had vowed to do what many considered impossible: create a faux pattie that was indistinguishable from the real deal.

I’d heard it before, like when you hear a young fighter say they want to be world champion. Good luck with that. A desirable veggie burger is a legit culinary holy grail.

Impossible Foods wants you to believe in a plant-based utopia where vegans would no longer have to fake their hamburgasms, and the occasional carnivore might blush a pinker shade of medium. The company intends to heal the trauma buried in bellies of those who have tried to love a veggie burger, and lubricate the mouths of the most die-hard, unrepentant lovers of meat.

The patty is built from a protein-heavy base of wheat, coconut and potato-based ingredients. Crucially, it also contains a plant ingredient that tastes almost exactly like animal blood.

This secret weapon is called leghemoglobin, and it tastes like hemoglobin, the thing in animal blood that carries oxygen to cells. Leghemoglobin is short for “legume-hemoglobin” and is produced in special nodules on the roots of legume plants like peas and beans. Since we don’t usually eat the roots of legumes, the FDA is waiting on certain safety tests before declaring the Impossible Burger safe to eat. Impossible Foods says the results are in, and clear: no safety risk.

When I first heard about Impossible Burger and leghemoglobin, I went to a neighbor’s garden and, with permission, harvested some pea plants. I located some nodules on the roots; they were pink inside. As I washed them, I wondered if they tasted like blood. And they did. That big metallic flavor. The taste of being punched in the face.

Like the Impossible Burger, the nodules bleed pink, and the company has plans to ramp up production of its burgers to a million pounds per month in the near future. The leghemoglobin will be produced by GMO yeast, which has some activists totally conflicted. Meanwhile, as samples have become available, an army of bloodthirsty, unsentimental food reporters have lined up like bowling pins for this busy burger to knock down.

Impossible Foods CEO Patrick O. Brown has set a 2035 deadline for his company to have “...completely eliminated animals from the food system.”

Impossible Burger isn’t yet available in stores, and the roll-out has been slow – agonizingly so for some who can’t wait to get their meatless mouths around this plant-based rendition of America’s signature dish. About 50 restaurants, including Umami Burger and Momofuko, have been licensed to serve the meat substitute. My first taste came last week at the Clover Food Lab in Harvard Square, which recently became the first vendor in New England to sell it. The fake meat came in the form of a meatball sub, which is a local specialty of my home town of Cambridge. Having it not be a veggie burger in any way made this dish a lot less likely to trigger any veggie burger-related PTSD.

The Impossible Burger balls were mixed with egg and parsley, and presumably bread crumbs and whatever else they put in meatballs, and baked in tomato sauce. They were good. Amazing even. And tasty. But most importantly, they were without question meatballs.

It’s too bad about the pita pocket thing they were served on, or the lack of anything else on the sandwich. Toppings would have been more sub-like: lettuce, onion, tomato, pickles, hot peppers. AKA, “everything.” But shortcomings like those we can work with.

Alas, most of us don’t currently live within striking distance of an Impossible Burger. So, for the moment, most aspiring herbivores remain stuck in the familiar spot between various flavors of mush, some of which can be quite tasty.

And this, today’s recipe, is one such mush, an adulterated version of a red curry lentil recipe from the book Plenty More by Yotam Ottolenghi. If food like this were my only source of protein, I’d probably be OK.

This dish doesn’t look or taste anything like meat, nor attempt to, which is refreshing. Let’s hope the next Tofurky I see will be at the Smithsonian Museum. And if the Impossible Foods people ever figure out bacon, I hope they call me ASAP.

Start with the meditative process of preparing chile oil. On low heat, saute? a small shallot, an inch of ginger and garlic, all sliced, and one star anise, a quartered tomato or tomato paste, and whatever kind of chile you’ve got. I used Thai red chile, jalapen?os and these weird peppers from the market, and cooked in sesame oil. Start with a few tablespoons of oil, but then add another 1⁄2 cup, and keep on lowest heat for at least half an hour. Then strain. The original recipe called for rapeseed oil, aka canola oil, and curry powder that I skipped.

Next, prepare something green. The recipe calls for blanched peas. I had Romanesco and kale belly buttons, so I saute?ed them with soy sauce, butter and garlic, and served as finger foods to dip into the soup. The kale hearts really hung onto it.

For the soup, slice a medium or large onion end to end, as thinly as possible, and cook in oil until clear. Add two or so tablespoons of Thai red curry paste (minding the overall heat tolerances of your audience). Cook for a moment, then pound several fat sticks of fresh lemon-grass with a rolling pin, peel off the tough outer leaves and add them whole. Mince the remains of crushed tender lemongrass hearts and add as well.

Stir-fry, and then add three kafir lime leaves and a cup of lentils. If you don’t have lime leaf and lemongrass that’s OK as long as you have good red chile paste, which should contain both of those. (In Missoula, we have fresh ginger and lemongrass at the farmers market, so your farmers have no excuses!) Add three cups of water, and cook on low with the lid on for about 15 minutes, until lentils are soft but water hasn’t completely steamed away.

Fish out the lime leaves and any obvious lemongrass parts, and blend it all with a submersible blender, then add a cup of coconut milk, and 2 tablespoons each of soy sauce and lime juice. Bring to a simmer briefly. Garnish with your greens and perhaps cilantro, and some of your chile oil, and serve with swagger. This dish, after all, will wow ’em, probably even more than a real beef patty.