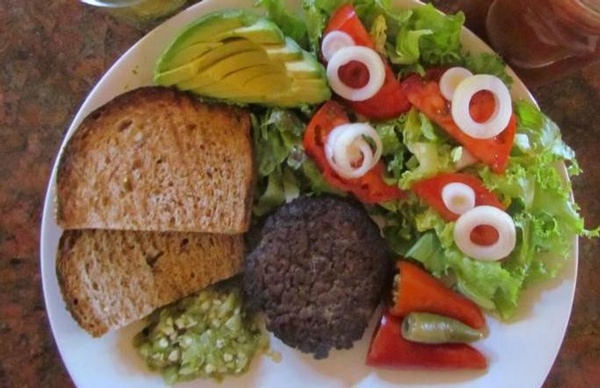 The hamburger is one of America’s favorite dishes and famous culinary exports. This simple meal illustrates sophisticated gastronomic principles, and thanks to its culinary stature, as well as some other unique attributes, the hamburger is also in a position to teach us something else: how to shrink the carbon footprint of our meals.

Beef is increasingly regarded as the most environmentally destructive form of human protein, thanks to the greenhouse gases released by cattle and the production of their food. Some grazing advocates have argued that properly managed cattle can be carbon-neutral, and a newly released study by the University of Michigan and the Union of Concerned Scientists supports that notion. Only about 1 percent of American beef is currently grass-fed, and it’s an open question as to whether beef eaters will stomach this change.

That’s because they would have eat grass-fed beef, which is often leaner and tougher than its feedlot finished counterpart. And they would also have to accept eating less, because healthy grazing practices only produce about half the beef per acre, compared to current practices. The price, meanwhile, would likely rise.

As I will explain in a moment, hamburger nullifies these concerns, as well as the one nobody is talking about: buying meat frozen, not fresh.

The idea that fresh meat is somehow superior to meat that’s spent months in the freezer is a notion as deeply rooted as it is unsupported. Unless that attitude changes, grass-fed beef will never be more than a niche product.

Here’s why. Feedlot beef can be supplied year-round, on demand. Whenever meat is required to fulfill an order, fat cows are shipped to slaughter, and meat is available, even in the dead of winter. But a grass-fed beef supplier is at a serious disadvantage trying to compete. The rancher’s cattle are standing around eating hay all winter, while those feedlot cows are eating corn and soy. The grass-fed animals weigh less than they did the previous summer, because hay is not as nutritious as green grass. Thanks to their fat reserves from the previous summer, grass-fed animals make it through the winter fine, but as those reserves are drained, the meat loses quality.

Grass-fed beef is of the highest quality when slaughtered in summer, at peak fattiness. That is when the producer has the most meat per animal to sell, and the consumer gets the richest meat.

Hamburger offers a solution to this and every other obstacle to grass-fed beef. Unlike more prestigious cuts, burger can be thawed very quickly. Just drop a frozen pack in a bowl of room temperature water. As a hunter, I do this regularly with my deer and elk burger, and it’s some of the finest eating there is, year round. So it’s perplexing to see Wendy’s making such a big deal of its “100 percent fresh never frozen” burger promise.

The only advantage of raw meat is convenience. You can take it home and cook it. But in terms of quality or safety, raw meat might as well be called rotting meat, because this is what happens as soon as it is no longer attached to a living animal. Unless it’s frozen or otherwise preserved.

When I walk by the raw meat counter at the supermarket, I give it a wide berth, glancing sideways and wondering “I wonder how long that has been sitting around?” Frozen meat, assuming it was properly packaged, can last

more than a year unscathed by the ravages of time. Beyond the frozen meat hurdle, hamburger addresses

the fact that grass-fed beef tends to be a little on the tough side. The grinder is a great equalizer, making grass-fed as tender as feed finished, while allowing all parts of the animal to contribute to the meal.

America’s favorite meal can even be a showcase for the growing number of viable meat-free burgers, like the plant-based Impossible burger, and maybe someday bug-burgers or lab-grown meat burgers.

Served on a bun with trimmings, the burger succeeds and satisfies thanks to the sophisticated convergence of flavors that are presented to the mouth in just the right proportions. The meat itself tastes good, but the nibble of onion is necessary as well as the munch of pickle, crunch of lettuce, and juicy gush of ripe tomato. The hamburger is a laboratory for exploring how different tastes can come together in your mouth to provide pleasure.

Alas, if there is a downside to the classic presentation of the hamburger, it’s that once the first bite is taken, the magnificent structure of the hamburger sandwich begins to break down. With each subsequent violation it appears less attractive to all but the one eating it. Meanwhile, it becomes more difficult to maintain the desired proportions of meat and trimmings in each bite. The good news is this most perfect of meals still leaves room for improvement.

I prefer to serve my burgers deconstructed. That way I can arrange each bite properly, without struggling to maintain control of an unstable sandwich. The bites can be delivered by spoon, fingertips on a toasted sesame seed bun, or in lettuce leaves.

The burger meat itself I mix with salt and garlic powder and a little bit of olive oil before cooking. Chopped parsley or other herbs are a great addition to ground, grass-fed meat as well.

When it’s time to eat, I begin with a bite-sized piece of meat and use a dab of mayo to stick a piece of onion to it. While, chewing I adjust the mouthful by taking nibbles of pickle, tomato, roasted green chile and whatever else I think will help.

But that’s just me. There is room for all of us, and all of our different stylings under the big burger tent