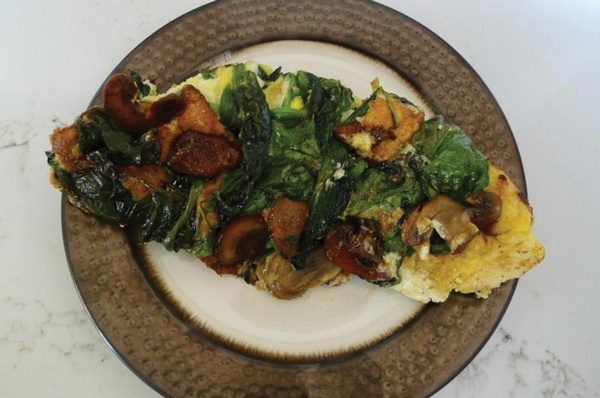 Last week at the first outdoor farmers market, I scored spinach in many forms. A sack of baby spinach at one stand, sturdy and juicy tiny leaves that were painstakingly harvested from young plants. Elsewhere, I acquired a bundle of spinach plants, bunched together like at the supermarket but with no broken stems, ripped leaves or festering pieces of slime stuck between. I also got some beefy leaves from a crop that was seeded last fall and got an early start this spring. Big leaves, crammed into a bag.

Every leaf would go in service of an extra-puffy inside-out spinach omelet.

This omelet. As I’m writing, I’m literally cooking another one, because it’s impossible to think about it, let alone describe it, and not want it.

The spinach is carefully arranged on the pan so that, when the time comes, it will do what nori does to a sushi roll. Eggs, separated, beaten and recombined, are applied to the spinach matrix, along with flavorful toppings. It puffs up like a souffle? while still somehow folded in half. this is how it starts:

Inside Out Spinach Omelet

2 eggs
Fresh spinach, in bunches or bag
Bacon, cheese, garlic, mushrooms, herbs, greens...stuff
to fry separately for a stuffin
2 T Butter (at least)
1/4 cup cream (or half-n-half or milk)
2 T olive oil (or more)
Salt, garlic powder, pepper, other spices
We begin by preparing the stuffing, which doubles as pan crusting, browned bits of goodness that stick to the outside of the omelet. This is the one spot in the recipe where I won’t be micromanaging you, so now is your chance to get creative. Bacon, chopped into little pieces, is a classic thing to include here, as it contributes its wonderful fat. If I can get good stuff I use it. Otherwise, butter and mushrooms and some kind of cheese. I like cheese curds because they fry nicely, as do chunks of semi-hard cheese. Che?vre or similar soft goat cheese is amazing in this dish. If using soft cheese though, it gets added later.

Fry the browned bits slowly, never burning, adding oil if necessary. Add chunks of garlic if you wish, and if you like, garlic. It will sweeten if cooked slowly. When the browned bits of goodness are nearly done, consider adding greens here. I had some watercress, gathered in the mountains by a morel picker at the market. (Of course I bought morels too, are you crazy?) The watercress adds a nice spice to the filling. Another time I used baby bok choi from the market. So small they were basically overgrown sprouts. (“Infanticide,” remarked a friend.)

While that is going, work on the eggs. The fresher the eggs are the better. Separate the yolks from whites of two eggs, storing them in separate bowls. Don’t let any yolk or water get into the whites. And if you wash your hands after separating the eggs, make sure they are very dry before proceeding. Using an eggbeater or similar tool beat the whites until they are stiff, with no liquid whites in the bowl. Pour cream into the yolks and beat them with a fork until fully combined. Put both egg bowls in the fridge until it’s time for the magic.

When the pan goodies are done, add a little soy sauce and garlic powder, and stir it around to mix and absorb. Remove half from the pan and set aside. Spread around the portion that remains in the pan so it’s evenly dispersed. Add butter and/or oil if the pan isn’t very oily, then begin arranging the spinach leaves. All of the stems should be parallel, with about half of the leaf tips facing one direction, and half the other. Those stems will be like rings around the rolled omelet, holding it together. Atop that matrix you can toss in more leaves haphazardly, filling in any gaps, covering pan and crustings.

Set the heat on low-ish and remove the egg bowls. Using a spoon or rubber spatula, gently fold the egg yolk into the stiff whites. Don’t mix it completely. Leave areas of pure white, and let the yolks run around and gather at the bottom a little.

Carefully spoon the egg mixture onto the spinach, in a line across the middle of the pan, directly perpendicular to the orientation of the stems. The runny yolk will find its way through the cracks between the leaves and grab onto the pan crustings.

Carefully arrange the goodies in the middle, letting them sink into the eggs. Now is the time to add che?vre or other soft cheese, also atop the egg foam.

As it heats, it will puff and soon will get so big you will wonder how to wrangle it. Two spatulas is the way to go. Let it cook about five minutes, during which the spinach will steam the egg from the bottom, go around the pan with a knife to loosen any egg on the side, and slide a spatula under the omelet to free it from the pan. Grab the other spatula and use them both on the side of the omelet closest to you, folding it in half over the egg. As you try to lift from under with the spatulas, it will try to slide away from you. Keep it up, gently, until it hits the side of the pan and is trapped. Turn off the heat and let it sit there, puffy, and serve.

If you suspect the egg is underdone, add 1/4 cup water to the pan and cook with the lid on until the water steams off.

Serve it with a nice cup of coffee and some hot sauce.

The same basic trick can be used with other greens as well, including wild ones like nettles, or other tender greens that can be cooked, like pea sprouts, baby kale, basil branches and of course those itty-bitty baby bok choi. These alternatives will be good, but they will always pale compared to spinach, which has the strength to hold the omelet together but isn’t tougher than it has to be when it’s time to chew. Spinach also won’t get spicy like a lot of cooking greens and has plenty of water, which steams the souffle? from underneath, adding puffiness and preventing the egg from burning