Hip, hip brûlée
One way to get sweet, sweet revenge on 2020 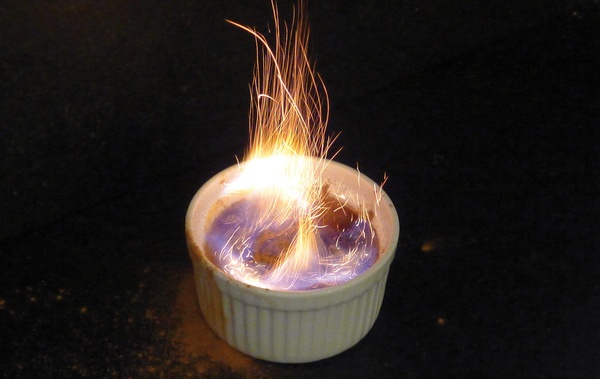 The dark days around winter solstice make human beings hungry for light. It could be a decorated tree, a menorah in the window or just some lights on your house. Whatever your creed or culture, you probably have a tradition that casts a glow during the holidays. But this time around, as we bid farewell to a dumpster fire of a year, pretty lights might not be enough. It might be time to add some real fire.

Fire can be a force of destruction as well as a cleansing rebirth – and this upcoming year, some of us surely hope to rise like phoenixes from the ashes. But first we have to tuck in 2020. And we’re going to put it to bed in style, with a flaming orange eggnog crème brûlée, finished with a bourbon flambé. A group of phoenixes is called an odyssey, which is appropriate, because this dish is a trip.

The bourbon and sugar bonfire doesn’t produce the typical glassy crème brûlée finish. So it won’t coerce the eater into disfiguring the delicate custard by jabbing its exoskeleton with a dessert spoon. The sugar melts, but the bourbon prevents it from recrystallizing into a glassy sheet. Instead, they combine into a granular topping that’s firm yet soft.

This recipe is for all of the people who don’t have one of those silly crème brûlée torches. Perhaps you’ve been melting your crèmes brûlée under the broiler, like a sensible person would. If it never occurred to you to simply ignite a bunch of sugar and booze atop your custard, you’re excused. But that is why we are here.

A fire that burns only to destroy isn’t worth its emissions. But the bourbon and sugar bonfire atop a crème brûlée burns with purpose: to cast light while combining bourbon and sugar into a penetrating sauce that soaks into the orange vanilla eggnog custard below.

This crème brûlée flambé works because it has too much of everything. Too much nutmeg, too much orange, too much bourbon and too much sugar. But all of this too muchness adds up to just the right balance of too-strong flavors. The strong flavors of orange, nutmeg and bourbon hold one another in check, while adding excitement to this otherwise mild-mannered custard.

Plus, it looks good on fire, especially when you toss in cinnamon, which sparkles and dances in the flames. Enjoy the pyrotechnics of this beautiful transformational force as we show 2020 to the doors, and venture forth into the new year like an odyssey of custard-happy phoenixes.

Preheat the oven to 325. Place an edged cookie sheet on the top rack. Pour two cups of water into the sheet to create steam for the custard.

Heat the cream slowly in a heavy-bottomed pan on the stove. Meanwhile, combine the yolks, sugar, nutmeg orange juice, vanilla and salt in a mixing bowl.

When the cream starts to simmer, add it slowly to the egg-sugar mix, stirring in a little at a time to temper the yolks. (“Temper” means heating the yolks and combining them gradually with the hot cream in a smooth, controlled way so as not to cook and curdle the eggs.)

Add the warm batter to your buttered ramekins (or other vessels), place them on the cookie sheet in the steaming water, and bake for an hour, until they are bubbling evenly. The bubbling starts on the edge and moves toward the center, until the entire surface shrinks, tightens and hardens into a darker yellow.

Remove from the oven. If serving right away, prepare to light your fire. If serving later, allow to cool to room temperature and add the orange peel shard garnish, if using. Keep chilled until ready to serve.

A tablespoon of bourbon is actually quite strong; you’ve been warned. I used my neighbor’s good stuff until he cut me off, so now I use Southern Comfort. And remember kids: never cook with something you wouldn’t drink. Covers four ramekins with flambé.

12 pinches cinnamon powder for the flame

Serving time could be the minute they come out of the oven, or the next day after the ramekins have properly chilled and the custard has settled. Whenever it’s time to light those fires and serve those crèmes brûlée, mix the sugars together and get ready to pour the whiskey.

To each ramekin at a time, pour in a tablespoon of whiskey and light with a long-necked BBQ lighter. Let it burn for 30 seconds while you toss three or so pinches of cinnamon into the flames and watch the spraying sparks. Then add a tablespoon of sugar mix to the ramekin, and let the fire burn out, dissolving the sugar.

When the fire dies, it’s ready to serve. When the first orange eggnog crème brûlée bourbon flambé is gone, check the calendar. If it’s still 2020, eat another. Repeat until it’s finally over. n