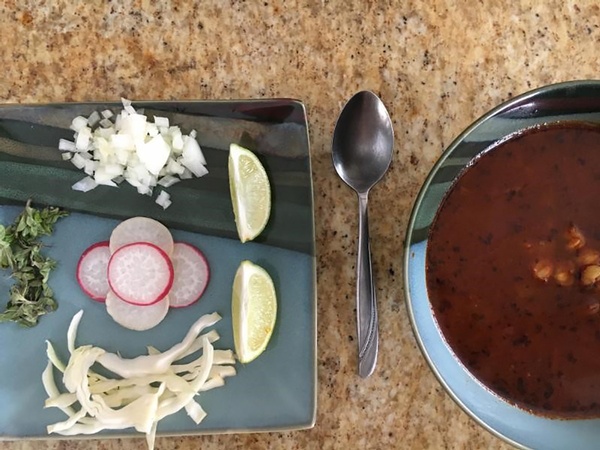 It all starts with corn that has been bathed in alkaline fluid to remove the outer husk from each kernel. This ancient Aztec process, called nixtamalization, is the foundation of Mexican and many other Latin American cuisines. The flour made from ground, nixtamalized corn is used to make tortillas, tamales, pupusas, arepas and many more corn-based delicacies.

Posole and hominy are served intact, which makes them a minority in the nixtamalized corn community. They are popular in certain regions, but incomparable in scale with the impact of, say, the tortilla.

In the strongholds of posole (also spelled pozole), like Mexico and the American Southwest, the word is spoken with reverence. A sip of that broth brings comfort, warmth, hydration and a penetrating corny flavor.

Most recipes with “hominy” in the title will direct the cook to discard the water in which the nixtamalized corn is soaked before use – in the case of canned hominy, the water is drained and discarded. Either dried or from a can, hominy is usually served like a whole grain, perhaps fried in a pan with butter, or tossed with other ingredients into a salad or side dish.

Alas, to open a can of posole and discard the water would be like making coffee, pouring it out and eating the grounds. Or closer to the point, like making bone stock, throwing away the stock, and eating the bones. Any recipe that instructs you to toss the corn water should itself be tossed. Posole makers, on the other hand, understand that corn water is at the heart of their dish.

The centrality of corn broth to posole is comparable to that of beef broth in Vietnamese pho. And like pho, the soulful broth is used as a base onto which fresh and aromatic herbs and vegetables are added.

Slices of onion, fresh or dried oregano, and a wedge of lime will garnish a typical bowl of posole. These additions do to that bowl what plugging in does to a lava lamp, energizing it into something brilliant, a team of rival flavors coming together perfectly at a singular point. Fancier garnish plates include slices of cabbage and radish, which add crunch, color and a sweet mustard fire. As pho lovers know, a fragrant, crunchy salad added to a spicy broth is a recipe for complete, unmitigated satisfaction.

Most posole recipes include pork, typically shoulder. Chicken posole is also popular, and sometimes I’ll tear up a rotisserie chicken and add it to a batch. My favorite posole is made with deer or elk, but animal flesh is not required for the magic to happen. That distinction belongs to the nixtamalized corn.

This recipe is for vegetarian posole and would be vegan if not for the butter. Omnivores should use bone stock and meat to their hearts’ content. In mixed company, cook the meat separately and add it at the end with the garnishes.

Purists will insist that whole, dried chile pods be used, rehydrated in water or stock, and then blending into a slurry. For special occasions, I sometimes go that route, but chile powder, assuming it’s fresh, bright red and not adulterated by “fiesta spices” or such nonsense, will do a fine job.

Canned hominy is much easier to find than dried posole corn, so I’ve based this recipe on a 25-ounce can, which set me back $1.65 – perfect if you’re on a government-shutdown salary. All told, this dish feeds a whole family for about $5, not including meat.

3 Tablespoons butter
2 Tablespoons olive oil
1 large minced onion (about four cups),
2 cloves garlic, minced
4 Tablespoons chile powder. If the stuff you have is too spicy, substitute paprika as necessary to dilute the heat – ideally smoked paprika, which will make the posole taste as if it was cooked over a camp fire.
1 25-ounce can hominy
1 medium potato, cut into inch chunks
Optional: meat. I like something tough, cooked slowly until tender. In a pinch, bacon slivers work, too.
1 cube of bouillon or equivalent amount of stock or bouillon paste
1 teaspoon salt
1 teaspoon garlic powder
1 Tablespoon dried oregano
Garnishes: fresh lime, fresh or dried oregano, fresh onions, radish, cabbage
Saute? the onions and garlic in the oil and butter, along with any meat you may be using. When the onions are clear, add the chile powder. Stir it all together and the can of hominy, including the water (take a little sip, first). Add two more cans of water and the bouillon cube (or alternative stock), the potato and the salt, pepper and oregano. Cook on medium heat for 30 minutes. Taste, season and serve with a plate of garnishes.