How not to get burned 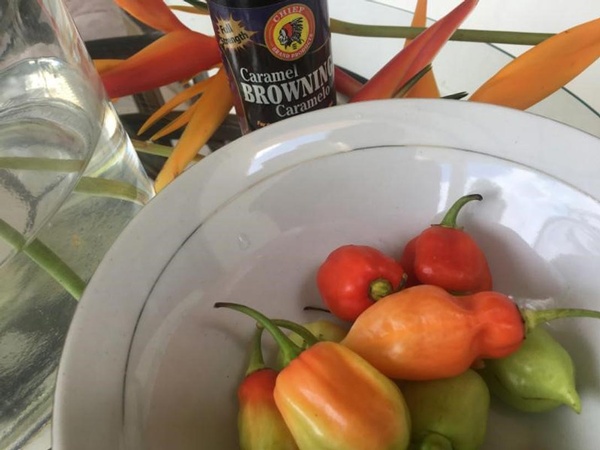 Food-focused travelers like myself are often frustrated when we get home to find that we can’t recreate the dishes we fell in love with, because the necessary ingredients are not available. I’m currently facing this dilemma in the Commonwealth of Dominica, a 16 by 26-mile island in the Caribbean with a folded landscape that’s about as flat as Nepal, and is not the Dominican Republic.

Dominica lies about midway in the north-south chain of islands east of Puerto Rico and the BVI, and is about midway between Antigua and St. Lucia.

Alas, when I return home I won’t be able to wander out the door – no shirt, no shoes – and pluck
cinnamon leaves from a backyard tree, or chase songbirds from the kitchen or adjust the acid levels with fresh passionfruit juice. Still, there are numerous lessons I will bring back and apply to ingredients that are readily available at home. And I’m now aware of some ingredients that can, with a little finger grease, be acquired in North America.

So today I’m going to discuss two particular ingredients that put both thrill and flavor into Caribbean cooking, in very different ways.

- Browning Sauce - I discovered our first thrilling flavor enhancer when I wandered into a tiny grocery hut looking for butter and salt. All eyes turned on me like a scene from an old Clint Eastwood movie when the hero walks into a boisterous bar that becomes instantly silent.

“Good night,” murmured the chorus in return, and the loud, animated game of dominoes continued. When the winning tile was loudly slapped onto the table, the shop keeper rose to help me. They had salt, but no butter. Not much of anything else, either. But there were some

curious bottles of what looked like soy sauce. “What’s that?” I asked, pointing.

I bought some and took it to the impromptu kitchen lab set up in our Airbnb, and got to work.

Browning is made from brown sugar that has been slowly and carefully caramelized. A few dashes add a little brown color and flavor. A few more dashes add a lot more.

Browning is kind of analogous to liquid smoke, which is simply captured smoke that has been suspended in solution, and adds the smell and flavor of smoke to cooking. That product is widely available in the states, but has little use in a place like Dominica, where people don’t need much of an excuse to smoke anything from scratch.

As someone well-acquainted with the difficulty of trying to brown something without burning it, I found quite a thrilling little genie inside this bottle. It makes adding brown color and flavor to food almost too easy. Almost.

You can turn up the brown, drop by drop, without any fear of burning. It’s like when you apply the perfect SPF sunscreen for a trip to the beach, only more delicious.

Being made from sugar, browning sauce doesn’t contain any protein, so it doesn’t add any umami flavor. But at the same time it feels like it does, as if it somehow tricks the tongue, or maybe the taste-brain, into detecting that savory flavor. Perhaps it’s the rich brown color browning adds. Or maybe the brown flavor that is part of the taste of browned meat causes the taste-brain to fill in the blanks and assume the presence of browned protein. However it works, when I added a few drops of browning into a fresh vegetable gravy it gave the meal a more savory, meaty feel. And the feeling of being able to have the brown you want without getting burned is as convenient as it is exciting, like having your cake and eating it too, and still not getting fat. (In the States, you can find bottles of Browning Sauce on Amazon.)

- The seasoning pepper – Dominicans (not to be confused with Dominican Republicans) like their food hot. So when I began seeing little baggies of fearsome-looking elongated habanero peppers for sale at market stalls, I assumed they were delicious agents of pain to be appreciated from afar and enjoyed, cautiously, in small doses. I love the smoky pungency of habanero pepper flavor, and have often lamented how damn hot they are, because it limits my intake of them. I figured the Dominicans are just so tough that they can handle the heat. But I eventually learned that these are not habanero peppers at all, but a related variety that goes by the name “seasoning peppers.”

Seasoning peppers sure look like a fire-breathing dragon guarding a treasure trove of delicious habanero flavor, a slightly benevolent beast that will graciously allow you to die with a nice taste in your mouth. But my friend Jimmy assured me that seasoning peppers aren’t hot, and when I cautiously nibbled a hole in the tip of one, far away from the dangerous seeds, I knew he was lying. A noxious, if tantalizing, cloud of pain wafted in my general direction, and I instinctively pulled away. In its wake, I tasted the delicious habanero flavor that I’ve been conditioned to associate with fire.

With each bite I winced like a dog that’s about to get whacked, but nonetheless has no intention of letting go of that bone.

To my surprise, the pain never came. I continued eating, munching ever closer to the seeds, and with each bite I was convinced that agony was coming. But it never did. Braced for a slap, all I got was a kiss. While the browning sauce offered browning without the burn, seasoning peppers offered habanero flavor without the burn. There is a sauce available on the island that’s made from seasoning peppers that offers the same effect of massive flavor with no afterburn. They don’t ship to the U.S., but I will be bringing home a gallon, and giving some to my local hot sauce artist, Arthur Wayne, to see if he can crack the code.

Of course, he’ll need the right ingredients. Bringing seeds back from a foreign country is a crime that I would never admit to. And luckily I won’t have to. Seeds for the Tobago Seasoning Hot Pepper, which looks and is described exactly like seasoning peppers, is available at Rare Seeds (www.rareseeds.com/tobago-seasoning-hot-pepper/)

I’ve ordered a pack, and we’ll see how they do. If all goes well, I’ll have a taste of Dominica in my garden come summer. It isn’t a cinnamon tree, but it will do. At the very least, I know I won’t get burned.