How the turnip got a tune-up 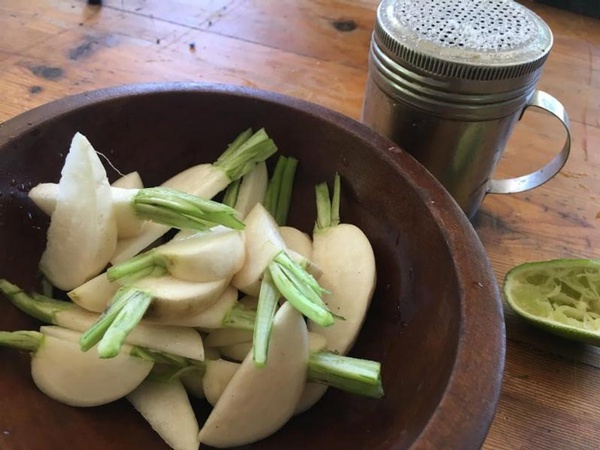 It’s normal to think of turnips as a winter-storage crop, the ones loitering with the rutabagas at the bottom of the root cellar after the potatoes, carrots and onions are all gone. They may have a reputation as a starvation food, but in recent years, turnips have been showing up at the farmers market in sweeter, earlier and more delicate forms. As growers have sought to fill that awkward gap when it feels like summer but the produce supply remains thin, they’ve turned to Japanese turnips.

These bulbous taproots look like radishes, and the first time I bit into one I braced for that mustard fire. But I got water instead. A lot. The Japanese turnip might be the juiciest root on earth.

It’s also sweet, without the slightest hint of a waft of a bite. At least in the root. The pungent flavor of the brassica clan is relegated to the leaves, where it can be as menacing as any mustard green.

Insiders call this turnip by its Japanese name Hakurei, which translates to “esteemed companion.” Stateside it usually goes by salad turnip, or, inaccurately, spring turnip. In truth, it can be planted and harvested throughout the summer, but most farmers have other things on their minds by then.

The home gardener can enjoy their esteemed companion all summer long, if they are so inclined, and have the space to seed a new row every two weeks or so. But the non-gardening home cook should act quickly, before the Hakurei are washed away by the bounty of summer.

An elegant way to cook the juicy root is to pan-fry it with its own greenery. Turnip greens are not only strong-flavored but tough, so they should be boiled separately. Meat or other protein can be included as well. I have fried the esteemed companion with red meat, bacon, eggs, and I can imagine it being just as delicious with tofu as well. No seriously.

Chop the stems and greens finely, and add them to boiling, salted water. Boil five minutes or more, then drain the greens and rinse them with cold water.

Meanwhile, slice the turnip in half, lengthwise, and lay the two halves on the cutting board. From here, cut it however you like. I like to slice the halves into quarters, and cut each of those in half again, all while the half-turnip lies flat, held together by your other hand. But straight-down slices of the turnip half work great too.

Brown your slices in olive oil or butter, with salt, pepper, and a splash of garlic powder, and then add the greens back to the pan and stir them in.

That’s the essence of it, and yet there is much more that one could do. Replace the olive oil with sesame, and the salt with soy, and you have an Asian-style side dish that can handle a dash of fish sauce, if you’re so inclined, and some fresh garlic scapes if you’re so fortunate, as well as those proteins. The finished product will taste more like the other ingredients than it does turnip, but when you happen upon a chunk, it’s a warm, sweet mouthful.

Once, I baked a thick salmon steak with lime, sugar, soy, sesame oil and Hakurei. I dusted the whole business with minced stems and baked at 350, adding the turnip slices about halfway through. I left the sliced turnip roots un-turned in the pan, to leave their upward-facing white sides unstained by the dark jus.

I recently cooked some minced turnip stems and leaves with some slices of fatty bacon. I got the bacon going first. It began to release oil and water as it cooked, at which point I added the stems. After a few minutes the water began to evaporate, so I added the leaves, which brought the moisture level back up. I cooked it, covered, as low as possible. It sputtered peacefully on low, in that unique state of simultaneous frying and steaming that I call freaming. The finished product had a southern-style pork ‘n greens feel. Turnip greens are, after all, a thing in the south.

And while they cook very well, perhaps the simplest, refreshing and altogether summery way to enjoy our esteemed companion is by doing nothing more than slicing, per above, leaving nary a green speck, and then giving it a dash of salt and a squeeze of lime. The acid and salt brightens and accentuates the subtle flavor of the turnip, finishing this crunchy, juicy treat.

One could take this idea a step further by making fridge pickles, too. But I prefer to leave my sliced salad turnip in a bowl of white vinaigrette, where it not only absorbs the dressing’s tanginess, but seems to distil it into a more concentrated form, such that the marinated turnip is somehow more tangy than had you just drunk the dressing.

Then add your Hakurei slices, and wait, say, at least five minutes before eating. For maximum tanginess absorption they need a night in the fridge.

Such raw turnip applications leave no need for the spicy foliage. So I spread out the leaves on a dehydrator rack, and leave them outside for a few days to dry. Then I crumble the remains into a freezer bag. This storage form of summer salad turnips will come in handy in winter, in soups, stews, and all sorts of brothy goodness.