In defense of brunch 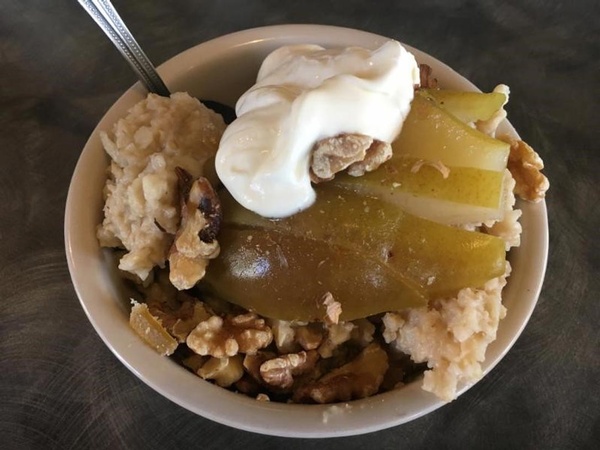 I’ve been hearing a lot of complaints lately about brunch, and about the people who eat it. They are food-fetishizing hipsters who languish in cafes, lubing their grease with mimosas and lattes. I’m really not sure what’s wrong with any of that, or what “hipsters” even are. Come to think of it, I’m not even sure what brunch is. But I think I’m OK with it.

I know I’m not a breakfast fan. I prefer to not eat until my belly has had a chance to recover from the excesses of the prior evening. When I feel a little growl down there, it means my belly is organized and ready for business, and I’m ready to wash something greasy down with coffee. I’m also compelled by what I’ve been reading about the benefits
of intermittent fasting (IF-ing), during which you basically eat whatever you want, every day, but only during an eight-hour daily feeding window. One could, for example, begin each day’s eating at 2 p.m. and finish at 10, squeezing in as many meals as he or she wishes, as does the outspoken IF-er and bodybuilder Martin Berkhan. He begins eating after a mid-day workout and purports to consume a lot of cheesecake.

I don’t need the cheesecake, but a growing body of research on humans and mice suggests that daily mini-fasts like these could have a bundle of positive impacts on health and longevity, especially in conjunction with exercise. Cardiovascular and cognitive health and blood markers, longer lives, and, according to Berkhan, better abs, can all result from “fasted training,” which has grown into a bonafide area of research.

As for brunch vs. the most important meal, some people clearly do great with a bowl of oatmeal in the morning. That isn’t exactly brunch, I don’t think. But then, what is?

Luckily, I found a guy named Walker Hunter who knows a thing or two about this hybrid meal. Hunter’s business, Burns Street Bistro, was supposed to be a mobile food service, but when the equipment delivery got delayed, in March 2012, he and his partners had to figure out how to pay for their newly leased commercial kitchen. They opened a sandwich shop, which did OK, but things really took off when they added weekend brunch.

“We had noticed the rise in popularity of brunch elsewhere, in other cities,” said Hunter, who had been a chef at Missoula’s Pearl. “In Portland, you can’t swing a dead cat without getting brunch on it. My co-workers and I loved brunch. We would try to go out for brunch around here, but nobody was doing much more than just late breakfast, except on holidays.”

So they started serving brunch on weekends, following a simple formula: Cook what you want, and put an egg on it.

“Our idea was that brunch could be whatever you wanted, haute cuisine, casual, fine dining, irreverent takes, all bets are off,” he says. “We aren’t limited to omelets and pancakes and waffles. This weekend we are doing rabbit and lamb. With eggs.”

Any kind of egg, he says – soft boiled, scrambled, poached, deviled, salt-cured – or even the classic sunny side up, which he calls the “simplest, prettiest way to prepare an egg.”

Like me, Hunter has noticed the rise in brunch hate, but he brushes off the inevitable backlash against something because it is popular. The folks who hate on things that are hip, he says, are gonna hate on brunch. And then there are complaints that are dated, that don’t stand up to the brunch of 2017.

“Anthony Bourdain said that if you’re cooking brunch then you’ve failed as a cook. That may be true in places where brunch is an afterthought. But here, we’ve seen increasing interest,” he says. “More brunch places are opening, and more existing places are focusing on brunch. The brunch scene in Missoula is really opening up, and it isn’t even bad for us. We just keep getting busier.”

So, to recap, if you want to cook brunch like a loved, award-winning establishment that is both iconoclastic and a stickler for fine cooking, stick an egg on it.

One of my favorites this time of year is the BLT with an egg on it. Toast two pieces of bread, pressed together as one single slice. This will result in one side of each piece of bread being toasted. Orient the half-toasted slices so the toasted sides face the inside of the sandwich to handle the mayo and tomato juice without getting soggy and the soft sides face out, cushioning your mouth and preventing the scraping that can occur when a sandwich is too delicious, too big and too toasted. To anyone who has ever cut or scratched their mouth on a toasted sandwich, this technique is the answer.

As for that oatmeal, it’s worth remembering that any cereal can be used to make a morning porridge. Rice can be made into congee. Wheat grains can be ground or boiled whole. Big grains. Small grains. Ancient grains.

What oats really have going, nutritionally, is soluble fiber, which other grains don’t have in such amounts. It’s the gooey factor in oatmeal, which really does a number on your bowels, in terms of getting them in line.

Washington Post food columnist Tamar Haspel recently made a compelling case for oats, arguing they are not only good for you and quick and easy to make, but only cost about 10 cents a bowl to make. Not only that, but generally speaking, a rotation or two of oats in between a farmer’s main cash crop is good for soil health and for breaking disease cycles. The problem is there is no money in oats, because they are so darn easy to grow. And that is why they are so cheap.

In addition to telling us to put an egg on it, Hunter was also kind enough to share another trade secret: the house steel-cut oats recipe. I had it the other day with cre?me fraiche and a pear poached in sweetened, spiced rose? wine, and it was just how I like it: prepared earlier and allowed to set. The pear and cre?me put it over the top. If you want it more risotto-like, by all means eat it when it’s hot. If you don’t have steel cut oats, use whatever you’ve got.

Cook until oats are tender and the desired consistency. Finish with innumerable applications

“You could take it in any direction,” Hunter says. “I come from New Hampshire. Homegrown maple syrup and a little bit of sea salt pretty much takes care of it.”