Jam out with your clams out 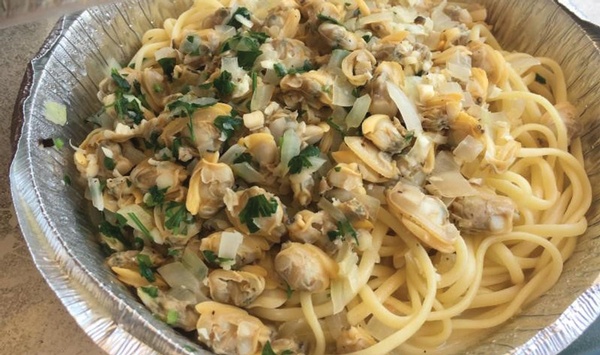 My clam linguine rule goes like this: if clam linguine is on the menu, I order it. The same goes for its Neapolitan progenitor, pasta alle vongole. My rule has never failed me. Indeed, the dish itself is too easy and spectacular to fail. But I sometimes ask myself why I don’t make it more often at home, with as many clams as I please.

The classic way to prepare and serve this dish is with fresh clams in their shells. I would argue that the shells look great, but you can’t eat them. And they kind of get in the way. Assuming one of the elemental joys of this dish is to eat noodles and clams together, you have to remove the clams before you can stir them in and have that pleasure. And you can only have as many clams as shells.

Do not pass on clam linguine made from canned clams. They bring a distinct set of advantages for a lot less money, with less environmental impact. There are culinary advantages as well.

If those canned clams are farmed, rather than wild caught, they are among the most environmentally friendly forms of animal protein that exist, sharing the distinction with mussels and oysters. Bivalve mollusks feed on ocean nutrients, cleansing the ocean, and they absorbing carbon dioxide from the atmosphere with which to build their shells.

One of the reasons alle vongole is better with canned clams is that you can add more clams. And without the shells, the clams and noodles can freely embrace and cook together. And perhaps most importantly, canned clams come with clam juice, which adds dank, fishy umami to the dish, like an Italian version of oyster sauce. I would argue that clam juice is more important to the dish than the clams themselves. And if you do make clam linguine with fresh clams, you should add clam juice.

Thanks to that bottled savory wharf-whiff, I cook the noodles to less than al dente, and let them finish cooking in the sauce, essentially by absorbing said clam juice. The noodles aren’t just cooked as much as rehydrated with clam juice.

On a sweltering day in San Diego last week, I found myself rehydrating with clam juice at a shaded table outside Mona Lisa Italian Foods. A local culinary advisor had sent me to the deli for a certain sandwich, but when I glanced at the menu, the clam linguine rule was activated.

Anywhere clam linguine is sold, we are given a choice between red or white, which boils down to with or without a few tomatoes. Cream is sometimes added to white sauce, making it whiter still, but on that day, mine did not have cream, which was just fine. Also fine: it was made with canned clams. Tons.

But knowing what I now know, I would never order it without tomatoes again. The hint of acid the tomato provides gives just the right brightness to this rich dish.

Cooking for my kids one day, I realized the red/white clam linguine dichotomy can be superimposed upon a box of macaroni and cheese, prepared alle vongole, of course. I call it yellow clam sauce. And it follows that if tomatoes are added, the sauce becomes orange.

Beyond the color, tomatoes add depth to macaroni and cheese alle vongole, making it more complete. Meanwhile, the tomatoes also stand out. Especially fresh, juicy ones. Simply follow the directions on the box, but after draining the noodles, cook some canned whole clams and clam juice in butter with garlic, tomatoes and parsley. Make sure it’s soupy with clam juice, then add the noodles, stir in the cheese, and serve.

Those instant mac ‘n’ cheese noodles are hollow in the middle, allowing sauce to saturate the cavity. In that spirit, I’ve been making my clam linguine with bucatini noodles, which are round and long like spaghetti but hollow in the middle. Basically it’s a longer version of the macaroni noodle that will suck up an inner core of clam sauce.

Here is a basic recipe for a basic red bucatini alle vongole. Canned clams and noodles may be in season all year long, but now is the time to enjoy the tomatoes, garlic and parsley at their finest. Other summer vegetables, like zucchini, can be slipped in as well.

Melt half the butter in the pan on medium heat with garlic and 2 tablespoons oil. When it starts to smell nice, add the tomatoes, oregano, pepper flakes, wine and contents of the clam can. Add the noodles and let them finish cooking in the sauce, adding parsley and basil along the way. If it starts to dry out, add more wine or clam juice as necessary. Turn off the heat, stir in grated cheese and the rest of the butter, and serve. But don’t serve too hot. People can’t control themselves with clam linguine in front of them, and mouth burns will certainly occur.