Ketosis is the mostest 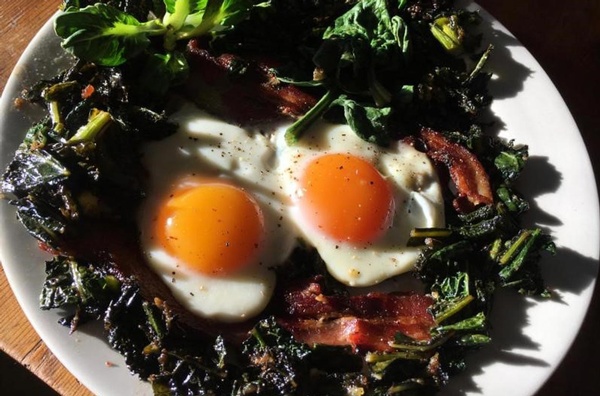 After a lifetime of undisciplined eating, I finally embarked on my first real diet, just in time for the holidays. Making my dietary choices by gut instinct it seemed, had resulted in a gut-centric body. Now I’m going after the core of my guts in my belly, the visceral belly fat, the insidious deposits that lurk between your internal organs, and sometimes in them or on them, far beneath the abdominal wall. It’s the fat you can’t squeeze, no matter how wide your grip. And it’s activist fat. The visceral deposits start to act like their own internal organ, even releasing hormones, some of which have been tied to inflammation and disease. I began laying down my visceral deposits some time in high school, when I discovered I had a talent for eating. And the thing about these old deposits, they won’t give up without a fight.

As diets go, I didn’t pick an easy one. The ketogenic diet used to be nicknamed the “starvation diet,” when it was the only known cure for certain neurological diseases. But in fairness, with this diet it only feels like you’re starving, even though the deprivation isn’t real.

Complete deprivation of carbs, though, is real in an effort to get your body into a fat-burning mode called ketosis. It’s like trying to switch your truck from unleaded to diesel fuel, but significantly easier.

Success at fat loss (and keeping it off) ultimately boils down to finding a diet and exercise routine you can actually stick to in the long run. The diet itself can be low-carb, high-carb and even carb-agnostic. Ketosis called to me because I felt like I was already half-way there. I knew I could live on bacon and eggs, because sometimes I practically do. So why not cut out the cake and go for it?

Literally, ketogenic means “ketone producing,” a reference to the splitting of fat molecules into ketones, which are similar to sugars in that the cells of our bodies are able to convert both of these molecules into energy, which, in essence, switches the cells from sugar-to fat-burning.

Being in ketosis is thought to impart so many health benefits that many adherents aren’t even trying to lose weight. You won’t lose weight, in fact, unless you eat fewer calories than you consume. In the first week I actually gained four pounds, before losing it back and then some, once I got the hang of it.

Since fat is so dense, you could drink a day’s worth of calories in melted butter, and pretty soon your stomach would be growling. And you can’t go crazy on protein, because if carbs are scarce your liver would sooner convert excess protein into sugar than break fat into ketones. By limiting protein and fat, the physical size of the material available to fill my belly was getting hard to scrape together, especially since many veggies, like potatoes, carrots, onions and others are high in carbohydrate as well. No roasted roots for me, and a plain bowl of oatmeal would contain my entire daily allotment of carbohydrate.

Since I’m not a beer and bread guy, I thought it would be easier. To get your body anywhere near ketosis you have to count them ruthlessly, and counting carbs is as intellectually challenging as it is physically and emotionally demanding. They are everywhere, and the most hardcore practitioners try to keep their daily carb intakes to less than 20 grams per day. A handful of pecans, which are the most ketone-friendly nut there is, still delivers about four grams of carbohydrate, or 20 percent of that daily allowance. Ditto for a carrot. The body and belly are feeling better, even if I still find myself wandering the kitchen wondering what the heck I’m supposed to eat.

I should point out that impulse control is not my strong suit, and chocolate croissants are my weakness. Which makes it really surprising that, the other day at the coffee shop indulging my kids, I was able to comfortably regard the croissant on the table.

I remember the pleasures of that croissant all too well, the crispy crumb shattering into 10,000 pieces, rolls of delicate buttered pleasure wrapped around a soft chocolate core. It would have mixed so wonderfully with a sip of coffee, yet there was something about the way my body was feeling at the time that made it easy to resist that temptation. Though it was hard to pinpoint a single factor behind my unexpected willpower, I was able to regard that pastry with the cool gaze of a happily married woman who may see something tasty but knows nothing will happen. Sure I want that taste, but I’m kind of enjoying the raw feeling of my belly digesting itself from the inside.

And little things were adding up. My bad breath has gone away, according to my wife, and I was having vivid dreams – a side-effect of being in ketosis that I’d read about and was now enjoying. And I was performing equally well in the bathroom, if I may say so myself, with moving, cleansing experiences.

I had figured out how to stay on the fat burning diet and still have a full belly. It came down to the one carbohydrate I’m allowed to eat as much of as I wish: fiber.

A catch-all term for any carbohydrate that we can’t digest, fiber, like other carbs, has a way of filling the
belly. Unfortunately, lots of high-fiber foods, including many fruits and veggies, also contain sugar and digestible carbohydrates. Finding enough fiber to include in one’s ketogenic diet, then, becomes a necessity.

Fiber has a long list of beneficial impacts, including the lowering of blood sugar levels, scrubbing your digestive tract, and keeping your gut bacteria happy and well fed. You may not be able to digest that fiber, but your flora can, and they have their ways of thanking you. Healthy gut flora correlate strongly with healthy people.

To do this, basically, find yourself some high-fiber veggies that are low on sugars. Leafy greens like spinach, kale, mustard and chicory, as well as lettuce and other leaves work well. Eat leaves until full, dressed in a high fat, low-carb manner, which is hardly a tall order among salad dressings. Just hold the croutons.

I’m not saying anyone should do what I do. In fact, as a general rule, I suggest doing the opposite. But nonetheless, allow me to leave you with a recipe for Eggs in a Forest that anyone will like, even carboholics. It’s basically eggs and bacon, plus fibrous leafy veggies. It could just as easily be cauliflower or broccoli, but today I’m doing greens.

Get the bacon going, chopped or in strips, with some olive oil. Add the toughest leaves, like kale. When tough greens and bacon are nearly done, add onions and garlic, chopped, adding butter as necessary – redundancy among fats is a beautiful thing. Then crack an egg or two on top of the tangled business. When the egg is nearly done to your liking, smother the pan with tender greens, like spinach or tat-soi, and put a lid on briefly. Sprinkle with salt or soy sauce and pepper, and serve with mayo, and the hot pepper of your choice.