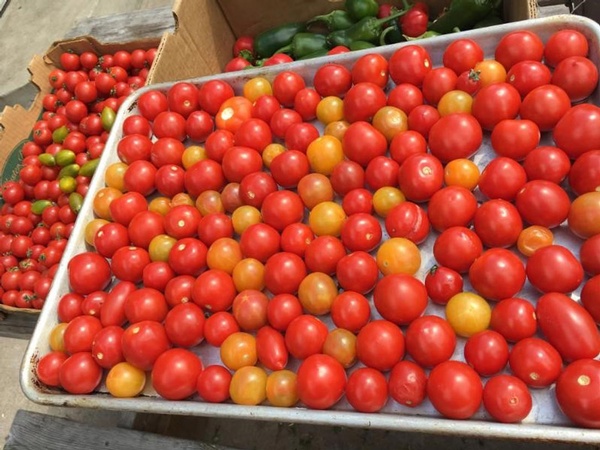 To the person who just paid $3.50 for a splotched, cracked heirloom, the idea of running away from tomatoes may seem quaint. You might even clench an imaginary paring knife as you feel yourself mouthing the challenge, “Come at me bro.”

But I want to state clearly for the record that it is indeed possible to have too many tomatoes, depending on the company you keep. I’ve got a friend, a vendor at the farmer’s market, who is so aggressively grumpy he leaves me little choice but to call him Mr. Sunshine. He’s got a gift for tomatoes that borders on the supernatural, and he brings stacks of boxes each week, flush with sports-car red tomato fruits. He sells them at a price that’s hard to refuse, giving zero “Fs” about the grumblings of other growers. And at the end of market, rather than load his tomatoes back in the truck, the price drops even further.

Spoiler alert: I’ve solved this riddle, rather effortlessly I might add, so you don’t have to. But before I share my oven-roasted tomato preserve, I hope you’ll entertain a few more words about Mr. Sunshine’s supernatural tomato plants.

In spring, Mr. Sunshine seeds his tomato plants in tiny little pots, and transplants them small. He sells the rest of the starts at market. Or should I say he brings them to market, in their yellow and withered glory reminiscent of Mr. Sunshine himself. I used to wonder why he even brought those sorry-looking plants to market at all, until he gave me one. Since then I’ve begun to understand the success of his tomato patch.

I put down my plant next to a bunch of flower pots, intending to plant it in the garden when I got around to it. But thanks to the underwhelming stature of this plant, putting it in the ground wasn’t a priority. Eventually I forgot about the little tomato.

As the weeks passed and June turned to July, the little plant got almost no water. Weeds grew up around the area, and I eventually went in with the weed whacker, digging out the pots and pruning the little plant from 15 to 5 inches tall. No leaves, just a faded green stump with a severed end. The fact that this plant had any green at all was a miracle.

Moved, I planted the tomato. As if a nob was turned, the faded green trunk immediately turned a few shades brighter. I know it can be risky to anthropomorphize one’s tomato plant, but it looked hungry, pissed and motivated. Within days, it sported some burley little buds. They grew, sprouted leaves and flowered, producing a single fruit that now hangs close to the main trunk, turning yellow.

Never underestimate a tomato plant. Especially one to which voodoo has clearly been applied.

Luckily, I’ve developed a way of dealing with any amount of tomatoes in a way that’s about as easy as it gets. I make an oven-roasted tomato sauce that can incorporate a variety of garden vegetables in moderation. It is so easy, versatile and satisfying that even with Mr. Sunshine practically paying me to take away his tomatoes, there is no such thing as too many.

Tomatoes
Vegetables (onions, garlic, zucchini, sweet peppers, carrots, eggplant)
Salt
Olive oil
Cut large tomatoes in half to speed the process, but you can leave small and even medium tomatoes whole. Lay them on a baking sheet. Sprinkle with salt, drizzle with olive oil, and bake at 350.

While that is happening, prepare your veggies. Slice the onions, peel the garlic, grate the carrots, chop the peppers and zucchini (my last batch I used small zucchini that still had flowers, which I included in the sauce.) You can include any combination of these ingredients, but they must not amount to more than 25 percent of the total amount of ma- terials, with tomatoes being the 75 percent majority.

When the tomatoes have begun to cook down, filling the pan with dilute tomato juice that simmers around the collapsing orbs, gently add the vegetables, folding them in. Continue cooking another 30 minutes.

I don’t add any herbs or spices, because I like the sauce to stay uncommitted. If, when the time comes, you wish to make a pasta sauce, adding some oregano and red wine will get you there.

Turn off the oven and allow the sauce to cool with the oven. Transfer contents of the tray(s) to a large mixing bowl and puree with an immersion blender (alternatively, use a blender or food processor).

When it’s time to use your sauce, customize it however necessary, adding garlic, vodka, Italian seasonings or whatever you need to get it where you want it to go. It is a tomato-flavored blank slate onto which you can paint any design you can imagine. You can also use this product as a stealth ingredient. I add a hit of it to my bone broth, coconut curry and green chile stew. Though none of these are dishes that make you think tomato sauce, they do usually contain tomatoes, and the sauce does the job. It just goes to show: they are everywhere, but they can be handled.