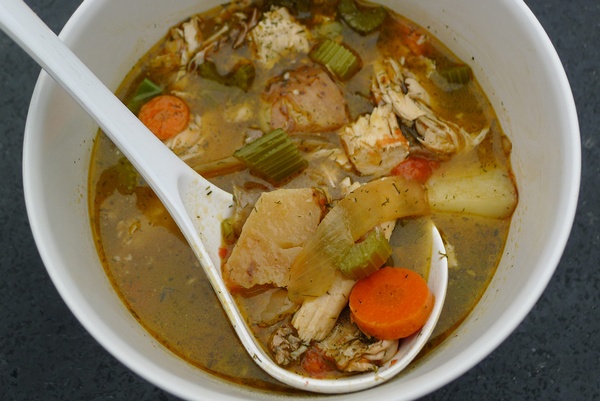 Mom got her chicken soup recipe from her mom. It’s a simple, brothy affair with lots of dill, the kind of soup that’s popular throughout the Yiddish diaspora, often referred to half-jokingly as Jewish Penicillin, because it always makes you feel better, no matter what ails you.

Yiddish is the native tongue of the Ashkenazi Jews of Eastern Europe and is based mostly on German but also contains Russian and Slavic words and a Hebrew alphabet. It’s a culture as much as a language, with its own traditions, recipe, and history of struggle of a community that has always been more a state of mind than a nation with borders. Throughout our tumultuous history, chicken soup with dill remained a constant.

Mom, her mom and their foremothers have all helped carry the torch forward to this point, all but assuring it will continue into the next generation as my kids are fans of chicken dill soup. But there is one aspect of this tradition that won’t continue: the step where you put a raw chicken into a pot of water. The idea of boiling a raw chicken bothers me the way boiled hot dogs do. I have to brown it first. And if you try it once, you’ll never go back.

It began when I started bringing home rotisserie chicken from the supermarket, as a quick way to make soup. You put a greasy brown bird in a pot of water with some veggies, and by the time it’s hot, the soup is done. I quickly realized that convenience wasn’t the only perk of “cheaters chicken soup,” as I called it.

I was pleased to taste the rich flavor those soft and juicy chickens gave to my soup and decided to learn how to recreate that magic in my own oven. Turns out, roasting your own chicken requires little more than a chicken – and a sliver of foresight.

Alas, on a typical afternoon, by the time my thoughts turn to dinner, it’s too late to roast a chicken. But If you give me a raw bird and four hours’ notice, I can brown it with the best of them. Anyone can, because it’s about as easy as turning the oven on and putting in the chicken.

In my house, by the time a browned chicken makes it into the soup pot it looks like it’s been accosted by piranhas, and that’s OK. The carrion crows posing as my children are part of the plan, because I roast a 6-pound bird, which leaves plenty of meat left over for soup, even after feeding us dinner. My kids are trained to save their bones, which I collect after dinner, smashing them with a frying pan to release their marrow. I use the broken, browned bones to make a lusty bone stock.

My soup isn’t clear like Mom’s. The rich, murky broth hides the chunks, including the tomatoes and potatoes I sneak in, breaking further from tradition. But even in my relatively busy and rebellious bowl of soup, the dominant dill flavor remains.

I roast my chicken with an herb or mix of herbs like Italian seasonings, harissa, herbes de Provence, parsley, sage, rosemary, thyme.  When browning a bird for Jewish Penicillin, the herb might as well be dill.

Rinse the chicken and let it dry – or dry it with a towel. Place the seasoned bird in a deep pan large enough that the chicken doesn’t quite touch the sides of the pan. Rub it with the olive oil, salt, pepper, garlic powder and dill. In a medium-sized mixing bowl, rub the remaining oil and spices on the potatoes, garlic, onions, celery and any organ or neck meat that came with the bird, and stuff it all into the cavity. Place any veggies that don’t fit around the bird.

Bake uncovered, breast-side down, at 325 degrees for three hours (or one hour per two pounds of bird), turning it over for the last 45 minutes.

That night for dinner, enjoy some oven-browned chicken and juicy vegetables from the cavity. After dinner, strip all the remaining meat off of the bones and cut into bite-sized chunks for use in the soup.

As for the bones, break or cut them if possible, to let out the marrow. Boil the bones for as long as you can, covered. I use a pasta boiler with the broken bones in the insert so I can easily remove them when it’s time – which it isn’t quite. Turn off the heat before getting ready for bed, so that the pot is cool enough to put in the fridge, bones and all, before you turn in for the night.

The next morning, strain the bones out and skim as much fat as you care to, and return the broth to the fridge until it’s time to make zup, as we say in Yiddish.

My additions: 1 pound of potatoes (Mom would use matzo balls), and a ½-pound chopped tomatoes for acid (other cooks might add a touch of lemon juice or vinegar)

If starting with a raw chicken: cut it into pieces and simmer in 8 quarts of water with a tablespoon of salt for two hours. Skim some fat, or not.

If starting with yesterday’s chicken, add the leftover chicken meat to the broth you made from your broken, browned bones. Also add any remaining cavity vegetables.

Add the vegetables to the cooked chicken and broth, and simmer for an hour. Adjust salt and dill to taste.