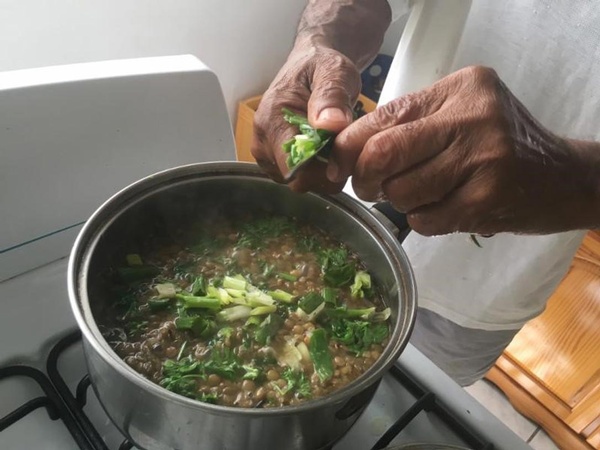 My next few stories will be sent in from the tiny island nation of Dominica, population 70,000. Dominica isn’t blessed with the blinding white sand beaches of many of its Caribbean neighbors. This has spared it from the tourist hordes and deprived it of the income they would have brought in. The narrow roads are pot-holed and unmarked. Old men pass their evenings playing banjo on dimly lit street corners.

With its stunted tourist economy, and few exports, Dominica is a living laboratory for how a Caribbean culture might evolve with minimal outside influence. Subsistence farms dot the steep volcanic hillsides. While the supermarket shelves of neighboring islands are stocked with imports, Dominica is a place where local food isn’t a buzz-word. By and large, it’s the only option, which makes it something of a locavore’s paradise. Meals like “goat water,” a thick goat stew, or chicken kweme made of lemongrass-smoked chicken in coconut sauce, are served alongside a revolving cast of “provisions,” a broad category of wild or cultivated roots, tubers and starchy above-ground plants like breadfruit. The rivers are flush with crayfish the size of lobsters.

One noteworthy exception to the local foods rule-of-thumb is the widespread use, and love, of lentils. It’s actually a Caribbean-wide phenomenon, especially in the English-speaking countries like Jamaica, Trinidad, Barbados and of course, Dominica. A legacy from the British and African involvement in the Caribbean, lentils have hung on, in part, because they are one of the cheapest forms of protein on Earth. Being dried and shelf-stable, they can be shipped with a minimum of expense, as there is no rush, and no refrigeration required. They could be imported by sailboat, as they once were, for a virtually carbon-free import, making them about as environmentally friendly as they would be if grown on-site. And being legumes, they require no fertilization. If farmed properly, they can leave the soil better than it was before they were planted.

The virtues of lentils are covered extensively in the 2015 book Lentil Underground, by Liz Carlisle. It details how a small group of gritty Montana farmers banded together during the 1980s farm crisis to save their struggling farms, and their depleted soil, by growing lentils. It’s an inspiring story that provides a roadmap for how small farmers can survive in a corporate-dominated playing field, and really makes a guy want to eat some lentils.

In those northern lands of snow and ice and thaw, and floods that I left behind, winter is traditionally a time where lentil soup is a comfort food. And as I’m learning here, it’s a good warm weather food, too.

Here is a lentil recipe given to me by Tapa, who runs an Airbnb in the tiny village of Castle Bruce. He learned it from a Jamaican woman who once rented him a room in London. “When she cook,” he reminisced, “you leek ya fingas.”

The recipe calls for two specialty ingredients which can be purchased online, or easily substituted for: Jamaican Jerk paste and Adobo seasoning powder. The jerk paste is made from thyme, ginger, green onions, garlic and Scotch Bonnet (aka haban?ero) peppers. But all of these ingredients except the ginger and pepper are already in Tapa’s recipe, so if you don’t have jerk paste, simply add crushed ginger, and as much minced hot pepper as you wish. But note: the Scotch Bonnet pepper, in addition to having legendary heat (it was once widely considered the world’s hottest), also has exceptional and unique flavor. So it can’t properly be replaced by any other type of chile.

Tapa’s recipe isn’t identical to that of his esteemed Jamaican mentor’s. He explained, “My cooking have a touch of Jamaican cuisine, but it’s my own initiative, what I do. I use my own discretion, adding and changing things according to how the food tastes.” You should feel free to do the same, as lentils are as forgiving a dish as they are healthy and cheap.

Cover the lentils with water. Add all of the ingredients except the thyme, green onion and parsley. Bring to a simmer and keep it there for about 45 minutes with the lid on, adding water as necessary to keep the lentils covered, until they are cooked but not mushy.

“You don’t really want your lentil falling apart. You want a little body in it. As it’s cooking you can take your spoon and turn it over and see what it’s like. When it’s cook, you take all your final seasoning.”

Which is to say, add the green onion, celery and parsley, cook for another 15 minutes. Season with salt and serve.

And here’s another recipe, courtesy Liz Carlisle, author of the aforementioned Lentil Underground. It has an Ethiopian twist, thanks to the berbere spice mix, for which there is no acceptable substitute.

A key step to this recipe, Carlisle explains, is to “...let the onions, water and berbere enjoy each others’ company for a few minutes.” Thus, add a minced onion to a pan with enough water to cover it. Add your berbere mix.

Simmer the onion, spice and water for 30 minutes. Then add olive oil, garlic and salt. After another five minutes, add lentils, and more water or stock as the lentils start to swell.

Keep adding water or stock as the lentils swell, and cook until they are done to your desired tenderness.