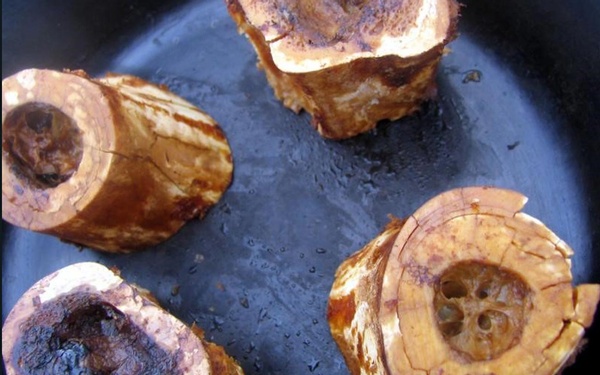 Bone soup, which cooks and farmers have known about forever, has suddenly become everyone’s favorite steaming health-food elixir. Professional athletes have their cooks prepare it for them daily as a recovery drink, to counter the rigors of the game on their aging, battered bodies. In trendy eateries, bone soup can be sold by the cup, the jar, the growler, or with your choice of noodles, sauces and protein in a build-your-own “broth bar.” It can be off-
putting to watch a food fad take off, but this is a trend worth respecting. Not only is bone soup good for you, but learning how to make the bone stock from which it’s made will take your cooking to new levels.

To properly appreciate bone soup is to potentially upend how you view meat itself. While most meat eaters focus on the muscle flesh, a brotharian values the bones even more. Muscle meat has protein, but so does a bowl of rice and beans. Bones contain different things, a diverse cocktail of nutrients that become available in stages, as the bones cook.

After a few hours, tendon, cartilage and other pieces of connective tissue attached to bones begin to melt into collagen, gelatin and other base proteins that are hard to get from non-animal sources. Just ask any vegetarian Jell-o lover.

Those melted connective tissues are good for our own connective tissues, helping them rebuild after a tough session, which is part of why bone soup is considered a great recovery drink for athletes. Many prefer to cook their bones even longer, in order to extract minerals like calcium. A common practice is to add a tablespoon of vinegar to the bones to enhance the mineral leaching.

But not all minerals are desirable. In fact, one fear that’s dogged the bone broth bandwagon has been the idea that if animals are exposed to heavy metals like lead, the bones are where such dangerous metals would concentrate. These fears were fanned by a 2013 study on commercially available bone broth, and again recently, when the nonprofit Center for Environmental Health commissioned an analysis of a number of over-the-counter supplements. The Caveman Paleo Formula supplement, sold in the form of powdered, encapsulated “bone broth drink mix,” had dangerous levels of lead and became the subject of a law suit.

Perhaps the lesson here is that if you want to indulge in an ancient nutritional ritual, it’s better to do it in smaller batches with local bones, provided you don’t live in an area where the animals graze on fields poisoned with heavy metals.

The difference between stock and broth is that broth is ready to eat while stock is an ingredient. In fact, it’s the primary ingredient in broth.

Stock is low-key, while broth can be colorful and indulgent. Stock is uncommitted and versatile, while broth is just a few added ingredients away from being soup. Unadulterated stock is not something you would want to drink, unless you’ve added salt and some kind of fat. At which point you would be drinking broth.

I love many kinds of animal fat, but not all kinds. And the amount of fat I want to eat in my broth or soup will vary by animal. I like the fat of chicken, duck and beef, but don’t need a thick layer of it atop my steaming bowl. With some wild game animals like deer or elk, the fat is so thick it will congeal on your teeth, and I don’t want a single particle in my food.

Whole birds can be cooked into a broth in much the same way that bones can. So the directions that follow can apply to either, or.

In order to get rid of some fat (and perhaps save it for other uses later), the first step is to roast the bone (or bird) in the oven. This not only melts a lot of fat into the pan, but also adds browned favor to the bones or bird. I’ll

sprinkle them with salt and garlic powder and bake at 350 degrees (300 for the bird), turning when necessary until the pieces (or the chicken or duck skin) develop a nice dry brown all around.

When fat has melted off and everything is brown, allow to cool. Then transfer the bones to your cooking pot. (In the case of bird bone stock, cook until soft, and after it cools fish the bones out of the meat and skin and proceed

with the extracted bones, reserving the meat for later). Or do the same with a rotisserie chicken, and proceed.

What happens next can be done on a stove-top over the course of several hours at low to medium heat. I prefer to use the Instant Pot, a multifunction electric cooker that has all kinds of functions, even a yogurt-maker setting, but I’ve only used the pressure cooker. And that alone has made the unit well worth the price.

I pressure cook my bones for 60 minutes of high pressure, and let the unit cool down until the pressure is gone and the lid will open. Alternatively, simmer the bones on the stovetop for about six hours.

For a pho-style broth, along with the bones add a pod of star anise, a three-inch piece of cinnamon, two cloves and three cardamom pods for a 2-gallon batch, along with some fried ginger coins, a pan-blackened quartered onion, and an apple.

Strain the bones (and spices), and let the stock cool slowly to room temperature, then put it in the fridge. After it cools completely, the solid fat can easily be removed.

When making a soup of chicken, duck or beef bones, I will leave an amount of fat that I think will taste good with what I’ll be serving. When in doubt, take it out; you can always add the fat back later when the soup is cooking. If I’m making stock to freeze, I’ll skim all the fat out.

To make a general stock or broth, add aromatic veggies like carrots, celery and onion, and cook at a gentle simmer for an hour or two.

You can dress it up at serving time. Start with salt or soy sauce. If it needs fat, and you don’t have any skimmed fat reserved from earlier, use a good olive oil. Sauces, like hoisin or pepper, can be added, along with cilantro, parsley, sliced peppers, raw onions and lemongrass, grated ginger and garlic, and a dusting of black pepper.

Dress it up in different ways, adding noodles or sopping it up with bread. You have all winter, and the rest of your life, to perfect your bone soup. Once you get the hang of it, all the research becomes quite edible.