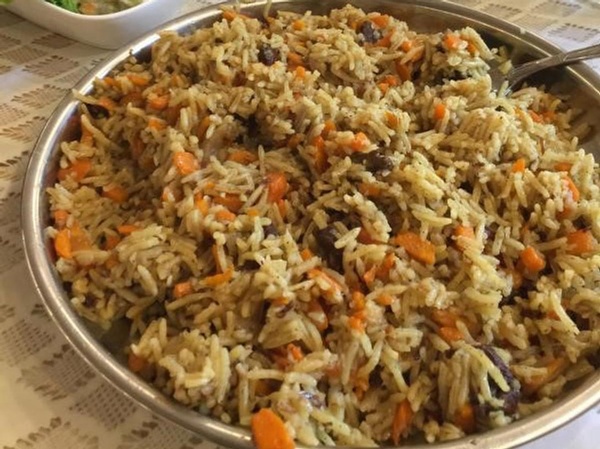 Years ago, I was initiated into the ways of plov by a group of Uzbek businessmen. Plov is a Central Asian dish of rice, meat and vegetables. It is the father of rice pilaf, they told me, along with many other related dishes, such as paella. Most historians and linguists trace the origins of plov to an Indian dish similar to what is now called pulao, based on the Sanskrit pulaka. But in any case, the Uzbek businessmen were in town for a conference at the University of Montana, and by night they made plov at the campus International House. And I was eating it up.

One party in particular was attended by students from some other “stan” countries, like Tajikistan, many of which claim joint ownership of plov. Thanks to mother Russia acting as a culinary conduit, the popularity of plov has spread throughout the former USSR. But the underlying techniques can be found anywhere in the world that rice is grown and consumed, from Guyanese Cook-Up Rice to that San Francisco treat Rice-a-Roni.

I learned what I learned from those Uzbek businessmen and haven’t looked back. I remember what I think I remember, forget what I forgot, and haven’t taken any continuing education classes on the subject. So my version has drifted ever further from the source over the years. For one, I use olive oil instead of fat from around the tailbone of an old sheep.

The basic idea is to fry the meat, onions, garlic, carrots and spices into a browned, greasy mix, add rice and water or stock, and let it cook until the rice has absorbed all of the water and is perfectly done. If you have a piece of lamb or mutton fat, use a potato masher to squeeze out the liquid oil, and don’t let the heat above medium or it will burn. When the pan has sufficient oil to cover the bottom, add chunks of meat.

The gaminess of old sheep, aka mutton, is the perfect counterbalance to the cumin, coriander and other spices that are used. But mutton can be hard to get. Goat plov is good too, although fat would have to be added because those gamey critters don’t pack much. And if you can get goat, let me know where. As it is, lamb is the most authentic and most widely available option, though making plov from lamb is kind of like making stew out of ribeye.

My plov recipe has evolved with wild game, as that is what I have on hand. And as it happens, wild game has some flavor and can stand a good cooking. But since deer and elk are lean, and what fat they have congeals way too easily for comfort, I go with the XVOO. Butter or bacon can also be used.

When the meat is nicely browned, add an onion, sliced in half and thinly from end to end. When the onions are soft and light brown, add the chopped cloves of a head of garlic and a tablespoon each of cumin and coriander, ideally freshly ground, and a teaspoon each of salt and ground black pepper. Add carrots, grated or sliced – about two to five carrots, depending on size; enough to completely cover the onions and meat – and stir it all together. Somewhere in there, I add a glass or two of red wine.

Add 2 cups of rice, and about 5 cups of water or stock. If using starchy rice like jasmine, rinse it several times first.

Cover and simmer over medium heat until the rice is done. Stay in touch with the rice as it cooks. Depending on the variety you use, it may be necessary to add more water.

Let the plov sit, or “rest,” for about 15 minutes with the lid on before serving. This lets the flavors settle and come to terms with one another, and for the moisture to distribute itself evenly. Then, fluff the plov with a wooden spoon or spatula, and serve. All of the water should be absorbed, and the rice should be light and perfect.

That shot of wine is not authentic, but it adds a nice base of umami, like soy sauce. I don’t know what they would have to say about this in the “stans,” but it works for me. Along similar acidic, umami lines, I don’t think a tomato or a dab of tomato product – ketchup even – would hurt.

My version may not be authentic, but it is rooted in deep authenticity. It has changed with the times and the places and the ingredients, and ultimately my implovisations. It can even be made without meat. And it’s delicious.