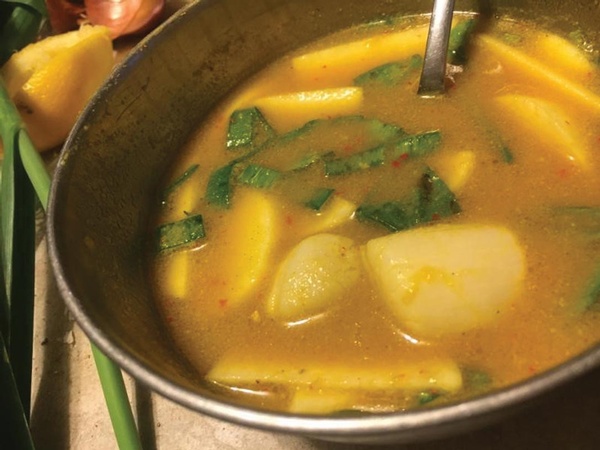 Ari LeVaux - 07/05/2018
John's Fish Market in Vineyard Haven, Mass., fits the mold of many fish stores along the Eastern Seaboard. There's a soft serve ice cream machine, a deep fryer, and a menu full of seafood baskets, lobster rolls and other standard delicacies to be enjoyed at the picnic tables out front. Inside, the refrigerated counter holds fresh fish: local flounder, lemon sole, striped bass, tuna, fluke and bluefish, as well as others brought in from elsewhere in the region.
It's the cook, Kevin Oh, of Perak, Malaysia, that sets John's apart. For the last 24 years, Chef Oh has been combining his Far Eastern flair with fresh, East Coast seafood. This summer's menu includes halibut from the Gulf of Maine prepared with ginger and scallion, swordfish with Malaysian molee sauce, and the sweetest, most savory scallops in the sea, gently cooked with cream and spinach.
"We have the same thing in mind: making people smile with good food," says Glenn Pachico, the third-generation owner of John's. His wife, Sheila, says, "He's made it so I don't want to eat American food anymore."
Looking East has long been a tradition in the Pachico family. While dragging a net in 600 feet of water on the edge of the "canyon wall," as Glenn calls the Continental Shelf, in the late ’50s, Glenn's dad, John Jr ., hauled up a 36-pound lobster.
"The crusher claw fed 15 people," Glenn recalls. It's relatively petite five-pound pincer graces a shelf in a utility room in the back of the building, a room that also houses a freezer, an office and several lobster tanks. It’s also home to Chef Oh's kitchen, where I had appeared in hopes of learning his recipe for the spicy Malaysian curry that's charmed Martha's Vineyard.
"He doesn't usually give away his secrets," Glenn had told me. I nodded, solemnly. "I don't blame him," I mustered.
"I'll swawfen him up," Glenn offered, in East Coast-ese almost as heavy as Chef Oh's Far East flair.
Those two men understand each other perfectly, despite each laying the accent on so thickly. "He's been making me laugh for 24 years," John mused. "He's even taught me things about fishing, including some new knots. He'll tawk."
Two days later, there I was in the office space behind the fish counter, sitting next to Chef Oh. He'd agreed to share the recipe with me and given me his blessing to share it with you.
My plan was to make Chef Oh's curry with some of Glenn's bay scallops, which the crew had harvested in cold water and frozen before the delicious creatures had the opportunity to warm up. I had been eating them for days, usually raw in their sweet umami glory, but sometimes with the likes of lemon, hot sauce and mayonnaise.
Glenn says the bay scallops are getting scarce in the ponds, which they call the saltwater inlets around the island. Rising water temperatures are creating algae blooms that take away the oxygen from the scallop larvae, snuffing them out. So the bay scallops have been heading out to sea, Glenn says. But last November, in an offshore location that must remain undisclosed, the crew got into them.
If you don't have scallops, any seafood works great in Chef Oh Curry. Some of his ingredients are dried, despite being available fresh, such as lemongrass and galangal; he just prefers them in powdered form. Another tricky ingredient to find is basil mint; I've made a note-to-self to order seeds to plant, but in the meantime, the combination of basil and mint works too.
He uses dried Thai chili pods, but most any red chile, in whole, flake or powdered form, will work. I've been using Aleppo Pepper flakes, which are heavenly.
Chef Oh's Curry Paste (for two)
One good stick lemongrass, outer dry leaves removed and sliced thin (or use lemongrass powder)
5 fresh kaffir lime leaves (Chef Oh's come from his daughter's tree in San Diego)
1 medium shallot, minced
2 heads garlic, sliced
1 cubic inch fresh turmeric, peeled and sliced
2 cubic inches fresh ginger, peeled and sliced
Hot pepper (to taste)
1 teaspoon shrimp paste (optional)
Procedure: Add all ingredients, minus the galangal, to a Cuisinart-style food processor or high-speed blender. Work until it's paste. (Or use a mortar and pestle for extra points.) Add a little oil if necessary to keep things flowing. Adjust flavors as you see fit.
This paste is made into coconut seafood curry as follows. Substitute other proteins as you wish.
Chef Oh's Seafood Curry
2 heaping tablespoons Chef Oh's Curry Paste
1 can full-fat coconut milk or cream
Fish sauce
1 cubic inch fresh galangal, peeled, sliced and set aside
Salt, pepper
Lemon or lime
Basil mint, or basil + mint
Olive or other oil, or butter, or coconut oil
Seafood (preferably scallops harvested in cold water and frozen immediately)
Seasonal veggies like peas, garlic scapes, salad turnips or whatever seems clever
Procedure: Thaw scallops overnight and marinate in a squeeze of lemon/lime. Add oil to a pan on medium heat. Fry galangal slices and curry paste, working them around and browning them a little. Add the coconut milk and veggies, and heat to a simmer. Add salad turnip slices if using, and any other fast-cooking veggies. Add water if it's too thick; the curry should be on the thin side, for the moment.
When it tastes right, add the seafood (but not the lemon juice), and reduce heat to low.
It is very important, Chef Oh emphasized, to cook the seafood slowly, so it cooks gently and is soft and delicate. Garnish with basil mint, or basil and mint, and serve.