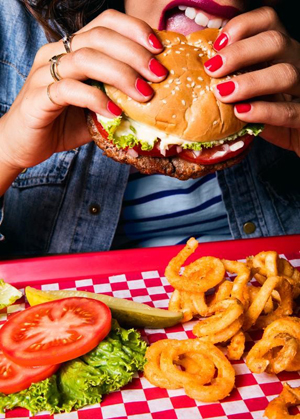 Vegetarians, at long last, will no longer have to fake their hamburgasms. The debut of the most meat-like veggie burger ever, at NYCs Momofuku Nishi, has made a big, bloody splash in the food world – and especially in the burgeoning plant-based foods community. The appropriately-named Impossible Burger sizzles like a burger, sending delectable clouds of meaty umami through the air. It browns like a burger, and this pleasing crisp skin manages to contain the juices that run blood-red when bitten into. People who regularly eat meat are lining up to pay 20 bucks for one of these bleeding burgers, invented by Silicon Valley-based Impossible Foods and retailed by the famed restaurateur David Chang.

The so-called Impossible Burger is meaty enough to satisfy the experts, as Business Insider correspondent and dedicated meat eater Linette Lopez observed. “If Chang, who was working busily around the restaurant, had told me that I was eating a burger made of rare bird meat, or some small woodland creature, I wouldn’t have been surprised. If he had told me that it was meat made from the wisest, noblest seal in the Arctic, I would’ve paused – but more importantly, I would’ve kept eating.”

For environmental, human and animal health concerns, plant-based fake animal products are all the rage these days, and I’ve been consistently disappointed in nearly all of them. Despite the accolades attached to the Impossible Burger, I had no reason to believe it was going to be anything more than pie in the sky, until I learned a little something about how it’s made.

The folks at Impossible Foods are using an ingredient I’d learned about decades ago, when I was getting a biology degree. I remember my plant physiology professor’s excitement about a molecule called leghemoglobin and its role in nitrogen fixation, the process by which leguminous plants like peas or beans are able to create their own fertilizer from the air.

Leghemoglobin is short for legume-hemoglobin. You may recognize the word hemoglobin as the molecule in blood that grabs oxygen from your lungs and ferries it to your cells. Leghemoglobin, the vegetal version of hemoglobin, is similarly red when attached to oxygen. But the reason your peas and other legumes don’t bleed is that leghemoglobin is found in the roots. Specifically, in little nodules that develop on the roots when they are colonized by soil bacteria called rhizobia, which team up with the plant to create one of the most important symbioses in the world. This partnership between plant and microbe is able to convert nitrogen from the air into plant protein. But the reaction can only happen in the absence of oxygen; that’s where the leghemoglobin comes in. An oxygen sponge, it soaks up any stray molecules that may be in the nodules, before they can gum up the nitrogen fixation process.

The folks at Impossible Foods are cultivating leghemoglobin in vats, and it’s fitting that veggie burger blood is found in legumes. After all, this is the plant group that is frequently tapped by vegetarians for its protein content. The fact that plant-based blood comes from these subterranean protein factories is intuitively pleasing.

But most importantly, this potato protein and coconut oil-based burger tastes like blood, which means that people want to eat it, myself included. But as they are only available at Momofuku Nishi (a second restaurant location for the Impossible Burger is being teased in San Francisco for this fall), here in Montana I might have to suffice for the real thing for the time being. And then I had another thought.

Twenty years ago, in plant physiology class, we played with root nodules from soybean plants. I remember their blood-red interiors when we sliced them up and have a distinct memory of wanting to taste them. Alas, eating bio lab supplies was frowned upon, so I never did.

The next morning, as my children slept peacefully, I went to the garden and started digging up their pea plants like a deranged grave robber.

I knew exactly what to look for, having dug for them in college. And there they were, pink on the outside, and reddish on the inside, clinging to the fragile pea roots. At long last, I finally bit into a bloody root nodule. I tasted that big, metallic, bloody flavor, like the taste of a busted lip. And I also tasted a strong pea flavor, for understandable reasons. I didn’t have enough nodules for a salad, but a dish based on them is an intriguing possibility. I fried a few in bacon grease and they were delicious. Maybe that’s kind of cheating, but if you had told me that those were animal-based bits I was crunching on, I would have believed you.

My pea nodules may have been a far cry from being a real hamburger, but I could see the promise. I also, if truth be known, wanted a hamburger. Writing this column required reading a lot of beautifully illustrated articles about America’s favorite sandwich, and today when I take my lunch it will be a hamburger made of real beef, for lack of a better alternative.

But if you told me that tomorrow’s lunch would drip legume blood instead of mammalian hemoglobin, I would be there with my bib on.