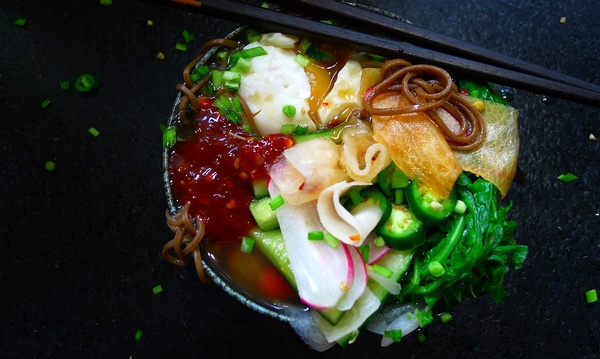 On the sidewalk outside of a Korean restaurant in a suburban Vancouver strip mall last summer, a signboard announced “Summer Menu.” I had no idea what that meant, but Korean food rarely lets me down. In that steaming humidity, with my shirt sticking to my body, I walked through the restaurant door. By the time I emerged, everything was different.

On the menu, I had noticed a dish called naengmyeon (knee-yang-my-in), billed as a cold noodle soup. I didn’t know much more, but it seemed like a great choice for that sweltering day, so I ordered it. The server brought a platter filled with little bowls of pickled vegetables, and a big bowl of ice, topped with noodles and vegetables. I’ve had plenty of meals served on hot plates to keep them warm, but never had a meal served on ice. He then poured a pitcher of clear, cold broth into the bowl, and set me loose on it.
It took a minute to get used to, like some alien life form. I am used to the idea that food must be hot in order to taste right, but this dish was the opposite. If it were warm, it would surely be tasty, but it wouldn’t be exceptional like it is cold. The soba noodles were particularly adept at clinging to the cold broth and crunchy vegetables, delivering them to my mouth, from which they quickly went to the middle of my body. I was grateful for the ice, because I did not want that quenching daikon broth to warm up.
Naengmyeon originated in 15th-century North Korea, where it was made with ice from the mountains. It’s the only North Korean dish I know. It makes you wonder what else the North Koreans would have to offer if they weren’t so oppressed and is a sobering way to feel solidarity with them.
Part of the genius of this dish is how simultaneously savory and refreshing it is. When I think refreshing, I usually think sweet, so it’s exhilarating to feel that from a salty food.
The one mini-bummer of the experience is that by the time the soup arrived, the restaurant’s air conditioning had cooled me down to the point where I didn’t need the cold radish broth so desperately. When I got home, I began making naengmyeon for hot afternoons on the patio, where it hit the spot deliciously. I learned my recipe from an online video by a Korean foodie named Kwon. He is really into naengmyeon – and food in general – and his glee is contagious.
I’ve transcribed Kwon’s performance into the recipe below. The most important part of this recipe is the radish broth itself, which is very simple and has a fascinating flavor. You can dress those brothy noodles however you wish. I add the cucumber, pickled daikon and hard-boiled egg, which are popular, as well as tomatoes – an unusual addition but I think it works. Sometimes I blanch vegetables like broccoli, bok choy or radish greens, and add them to the pile.
Many cooks, Kwon included, add cold slices of lean beef from a piece that had simmered in the radish broth. Daikon broth is a great medium in which to prepare meat, but I prefer my meat warm. Temperature aside, naengmyeon is an otherwise light dish, and meat takes it in a heavy direction I don’t care to follow. So instead of adding a slab of brisket, I prefer to make the stock with a bit of beef bouillon.
The following recipe will make about four quarts of broth, which I keep frozen. Then, when it’s going to be a hot day and I want some cold noodles, I’ll take some out to thaw ahead of time.
Kwon’s Daikon Broth
1 pound daikon radish, peeled and cut into inch-thick disks
3 ounces of ginger, peeled with a spoon and cut into four pieces
1 large onion, cut into quarters
1 tablespoon Better than Bouillon (or other brand) beef-flavored paste
Cut each piece of daikon into quarters and place into a pot with 5 quarts of water. Add the ginger, onion and bouillon. Simmer for two hours. Allow it to cool to room temperature. Strain, and store in the freezer. Remember not to fill your containers all the way up, or they’ll burst when they freeze.
Daikon Pickles
4 ounces peeled daikon
3 tablespoons cider vinegar
1 teaspoon sugar
1 pinch red pepper flakes
Use the peeler to thin-slice the daikon into ribbons. Mix with the other ingredients and let sit for 20 minutes.
Assembling and Serving:
Serves 4
1 pound soba noodles
4 eggs
1 large cucumber, sliced into 3-inch strips
Veggies like baby bok choy, broccoli or radish sprouts, boiled briefly and plunged into ice water
Sliced jalapeños, to taste
2 quarts daikon broth, thawed and cold
2 hard-boiled eggs, peeled and sliced in half
Soy sauce to taste
Korean hot red chili paste or chile flakes, to taste
Rice vinegar to taste
Boil the soba noodles until slightly al dente and rinse by hand in a strainer under the faucet to cool them and remove the starch. Strain and refrigerate until use.
During the heat of the day, put six ice cubes into each bowl and place the noodles on top. “Twist the noodles to make them more beautiful,” Kwon recommends. He adds cucumbers, pickled daikon, hard-boiled egg, brisket, Korean pear and mustard, becoming increasingly excited with each addition.
Eventually, you figure out how you like it, and you make your own pile of custom goodies atop the iced noodles. When the pile is complete, fill the bowl with cold radish broth. Season with soy sauce, cider vinegar and red chili paste, and start hydrating your scorched body with thirsty slurps of cold, brothy noodles.