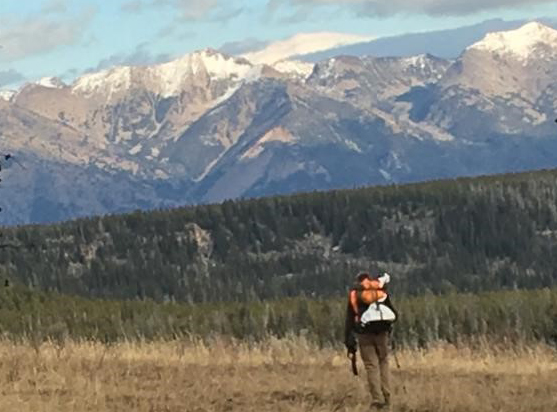 On the day after the election, I went hunting for elk. Being away for a week gave me the space to begin wrapping my head around Trump’s victory. I could let my own thoughts percolate away from the noise and drama – except when I checked the news on my device. Obsessively. At the expense of scanning for elk. Though I was in the middle of the wilderness, far removed from the chaos unfolding in Washington, D.C., I was – like we all were – inextricably linked to those events. And I couldn’t help but interpret much of what happened on that hunting trip through the lens of what the next four years holds.

The weather forecast had called for unseasonably warm temperatures, but that understanding failed to register in the
chill of that first pre-dawn morning. Perhaps, at some level, I had trouble believing that the sun would rise again. And I failed to remember that my hunting buddy hikes like a maniac. I heated up quickly huffing up the mountain behind him. By the time the sunrise had put away its colors, my waterproof pants had trapped a juicy layer of sweat.

Next thing you know, I’m hunting in my underpants.

My hunting pants hung from a tree, inside-out, drying in the sun. All day, I couldn’t shake the nagging concern that I eventually had to go get my pants. But the fact that I was hunting pants-free at all, in mid-fall and at 9,000 feet, was a greater cause of concern. It reinforced the sense of impending doom I’ve been feeling since Trump’s election, thanks in part to his lack of regard for the environment, epitomized by his expressed belief that climate change is a “Chinese hoax.”

There is a distinct feeling of vulnerability available to those who walk around the wilderness – or anywhere else – without the benefit of pants. After all, someone or some thing might grab you by the private parts. And again, this feeling was amplified by the political context. Millions of Americans are feeling vulnerable in the face of a Trump presidency. While white American men like myself don’t need to be worried about being deported or a target of hate crimes or discrimination, these are precarious times for many others. As I was hunting in grizzly bear country, I carried bear spray and clung to my gun for security.

How many Latinos and Muslims are currently in the market for guns, I wondered, since being singled out as tar- gets.

I noticed on the forest floor that some baby plants had sprouted. Bad timing. They must have thought it was springtime already, but in germinating now the plants had no chance of surviving the winter. Organisms do ill- advised things when confused. Like running two of the least popular presidential candidates in history against

one another, and spending the campaign arguing over which one is worse.

The warm weather was confusing to the elk as well. Their bodies have prepared for cold weather at this time of year, with thick fur and fatty insulation. Like me, the elk were overdressed, but didn’t have the option to shed layers like me. For the first few days we didn’t see a single animal. And without a layer of snow on the ground, it was nearly impossible to know if there were any elk in the vicinity at all.

The elk were most likely holed up in cool spots, which are generally in the highest, steepest, most north-facing slopes on the mountain. But those are not places for underpants hunters. These places are among the most dangerous, inaccessible and difficult to hunt, with or without pants.

Instead, I rested on the ridge tops, sunning my legs and using my binoculars to take a long view of things, while taking advantage of great cell coverage to monitor election fallout. One nugget that particularly resonated with me was an article by Naomi Klein. She argued that the election hinged on the votes of the working class people of the so-called Rust Belt and was won and lost on the issue of free trade. Trump opposes efforts to facilitate free trade, including the Trans-Pacific Partnership (TPP) currently being debated in Congress. He argues that it’s bad for American workers, among other reasons. And to my chagrin I agree with Donald Trump on this issue.

In addition to making workers feel vulnerable, such free trade deals are contrary to principles held dear by local food snobs like myself. Yes, it’s a wonderful world out there, and it’s important to think globally. But in order to be good citizens of a local community, we need to spend locally. Many of the benefits of localism touted by local food proponents also support arguments against

free trade deals. With an emphasis on local production and consumption of goods, we have a better sense of how something was produced. There is more accountability, in case there are any questions or issues that arise. There is the opportunity to build a trusting partnership directly with the producer, and pay as few middlemen as possible. And more of your dollars stay in your local community. I suspect that many of the Trumpistas share this view, along with the hippy farmers.

Bill Clinton was behind the North American Free Trade Agreement, which is widely regarded as a disaster for the Rust Belt workers, something they haven’t forgot- ten, Klein argues. Hillary only reversed her stance on the TPP, from support to oppose, after seeing how much success Bernie Sanders was having opposing the TPP in the primary. But her switch was perceived as insincere politi- cal calculus, and those following the issue didn’t buy it.

I was staring at my phone, like a total idiot, when my buddy noticed a herd of elk spilling over a ridge above us. We managed to hunker down, but they somehow noticed us. Being elk, the herd disappeared like an exhaled puff of smoke.

But the direction of their escape, over the ridge and onto the north-facing slope, was a clue that even stub- born hunters like ourselves could not ignore. We fol- lowed them over, and I found a slope so steep and perfectly north-facing that the sun hadn’t touched it for weeks, if not months. Suddenly I was in snow, a month old but still deep. And there was no phone reception to distract me. Soon enough I found fresh cow elk tracks. There is an elk at the end of every set of elk tracks, and this set was no exception. I was somehow able to track them down and sneak to within 100 yards, shooting a beautiful cow elk.

Then began the real work, that of hauling 200 pounds of meat out of a canyon so steep it barely held snow. Most of the meat spent the night at the bottom, cooling on a sheet of ice, and was near frozen when I returned the next day to retrieve it. Thirty hours, many of them grueling, after I shot her, the meat was in the truck.

In addition to the meat, I’d like to think I returned with some extra wisdom as well. It’s very important to keep cool. Respect your adversary. Put one foot in front of the other. Don’t forget the big picture. Don’t get killed. And don’t forget your pants.