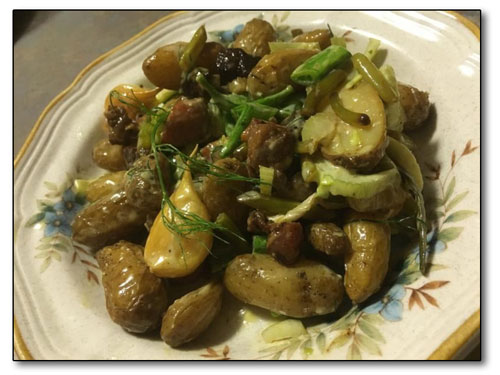 Potatoes are often considered a fall crop, to be hoarded in the root cellar through the winter, roasted with other roots and perhaps a sprig of rosemary and served alongside other hearty fare. But summer? Now is the time for spinach and lettuce, for peas, herbs, summer squash and all the bounty that the long days provide. Amidst this green blitz I don’t often consider potatoes for the menu, despite the fact that the first spuds are ready before most tomatoes turn ripe.

And they will continue to be dug throughout the season, until well past the first frost. The potatoes of summer may not be as eye-catching as some of the other options at the farmers’ market, but they should not be ignored.

The freshly dug ones are usually called “new potatoes,” and they behave differently than their mature counterparts. You can tell a potato is new, rather than just small, by a look at its skin. New potato skins are in a state of constant exfoliation, with many bare spots likely incurred from cleaning. You can peel a new potato by rubbing it with your thumb.

A mature potato, on the other hand, has tough, thick skin. This is the result of a curing process in which the potatoes are laid out in a dark, well-ventilated, cool place. This step represents the potatoes’ transition from fresh food to a storable form that’s fit to survive the winter. After curing, all remaining sugars will have been converted into complex carbohydrates, and the tuber’s physiological machinery will have switched to sleep mode.

Beneath the thin skin of a new potato, on the other hand, there are still sugars to be tasted. And, when I popped a raw one into my mouth at the market the other day, it was surprisingly juicy.

One important difference between new and old potatoes is that new potatoes won’t last very long, given their thin skin and active physiological machinery. While a properly stored cured potato can survive the winter, a new potato won’t last much longer than a zucchini in the fridge.

Potatoes, as any American knows, can appear in pretty much any American meal, breakfast, lunch or dinner, at any time of year. But there is also a seasonally appropriate class of potato recipes that will fit right in alongside that glass of lemonade or slice of tomato: A summer potato recipe that reflects the height of salad season.

New potato salad recipes abound online, as do those for normal potato salad. Some use sour cream-based dressings rather than the typical mayo. Others use a simple vinaigrette. The cilantro chutney I wrote about two weeks ago makes a fine potato salad as well.

Most potato salad recipes call for boiling or steaming the potatoes. I get it. Cooking them this way helps prepare the cut surfaces to really grip the sauce. Nonetheless, I prefer to oven-roast my potatoes, which adds a browned, caramelized flavor. Admittedly, this treatment cuts down on their adhesiveness to the sauce, but not prohibitively so.

I recently made a new potato salad with baby new fingerlings from the farmers’ market. They were so small that I didn’t even cut most before roasting them. That, in principle, should have further inhibited their grip on the sauce, but it didn’t matter. I tossed my salad in homemade garlic and dill mayo, and it held together beautifully.

Beyond the choice of dressings, a potato salad is a 3D blank canvas in many other ways as well, into which you can incorporate the fruits and leaves of summer’s progression. Fresh peas, snap or shelled, can be tossed in at the end, as can celery. Parsley, dill or cilantro can be added, but you will probably want to choose just one. Any protein, from tofu to bacon to shrimp, can be added as well, along with whatever else summer throws at you. Green onions (aka new onions) are preferable to chopped bulbs, but either will do. That fennel root sitting in your fridge, which seemed like such a sophisticated purchase at the time but now have no idea what to do with? Your new potato salad will swallow that up, along with more misfit produce than grandma’s seven-layer leftover casserole, but with a finish that’s fresh and crunchy.

(Counterpoint: my wife disagrees with me completely. She prefers her potato salad to have just potatoes, olive oil, salt, garlic and greenery, such as parsley.)

I roasted the new potatoes along with whole cloves of new garlic and rounds of carrots. Should have peeled the garlic first, but I didn’t. I tossed with oil, salt and garlic powder, and baked at 350 on a tray, stirring occasionally. If you happen to have any garlic scapes, chop and toss them in for the final minutes of cooking.

Be warned: this is a tasty mixture. You should probably roast extra of this for the kitchen vultures, because they will surely be circling. That fennel root could be roasted too, but I prefer to serve it raw and crunchy.

Let this cool before mixing with your uncooked veggies. Then toss in the dressing, and serve.

That dressing could be Dijon or balsamic vinaigrette, or something with crème fraiche. But if you find yourself at a crossroads and aren’t sure which way to turn, you can’t go wrong with mayo. Admittedly that’s kind of my motto in general, but especially so here.

I will leave you, thus, with my recipe for dill mayo: Crack an egg into a food processor, or better yet a cup into which your submersible hand blender can plunge. Add slices of fresh garlic and the juice of half a lime. Blend until everything is fully liquefied. Slowly add olive oil, in the thinnest of streams, as the mixture whizzes. After you’ve added about a ¼ cup, increase the flow of oil until another ¼ cup has been added. Blend another moment, then continue whizzing and pouring until it thickens into mayo, and the oil starts to pool on top. Add chopped fresh dill, blend again, and stir it into your new potato salad.