One nation, under ranch
The evolution of the simultaneously reviled and revered American condiment 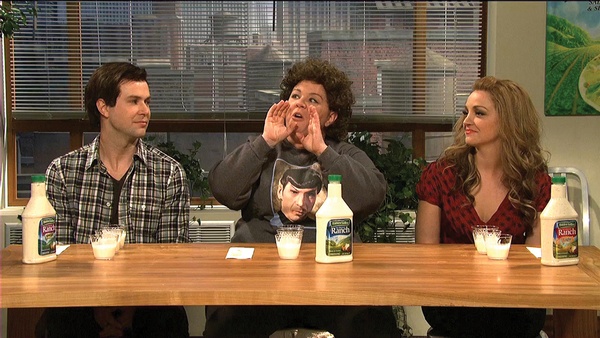 Last February, a 19-year-old Iowan interrupted presidential hopeful Kirsten Gillibrand as she addressed a crowd at the Airliner restaurant in Iowa City. The student, on a mission, suddenly found herself blinded by blinking cameras. She paused, being polite, and apologized. “Sorry ma’am; I’m just trying to get some ranch.”

And just like that, a heroine was born. Dubbed Ranch Girl, Hanna Kinney accidentally introduced the world to the 2020 Ranch movement.

Since it was invented on a California dude ranch in 1954, the creamy cool condiment is something ranch dressing eaters can’t seem to live life without.

Ranch dressing’s always been thought of as excessive and trashy, only now it’s also Zesty and Blasted. Some consider it the pinnacle of American culinary achievement; the most brilliant recipe ever created, after Coca-Cola, of course, and ketchup. Ranch is bae (beyond anything else).

We all secretly love it, right? The movement now is to ‘fess up. Admit your never-ending commitment to a confabulation that some from an earlier generation consider ... smelly.

“F*** ranch shame” is a new phrase found on the internet. It’s a cute reflection on how loyalty for a “dip” is so universal that some seem to consider it the fourth food group (it’s not). The plebeian taste has invaded the upper classes. So go ahead, reader, share in the new, ironic appreciation for the anti-intellectual condiment turned earnest.

For this, we can thank Generation Z – or is it the Woke Generation – born on and upward of 1997. Whatever you call them, they’re a nostalgic group, obsessed, it seems, with “Getting back to the ranch.”

But, love it or loath it (there’s no in-between), ranch dressing has inspired a fandom over the years beyond imagination. To mention a few: ranch-flavored toothpicks and dental floss, taco shells, sunflower seeds and popcorn. There are even ranch-scented candles. HV Ranch logos are a fashionable request at tattoo parlors. The Food Network added a new “Ranch Expert” to its line-up of chefs.

A four-tiered Hidden Valley Ranch fountain doesn’t sound that crazy for, say, your cousin’s buddy’s upcoming shotgun wedding. Or how about a cold keg of HV, now available on special order? Hidden Valley sells nearly 50 varieties of the overpowering gunk to more than one third of the public. How many outdated bottles do you have stashed on the side of your fridge?

It all started with Steve (aka Ken) Henson, a plumber who grew up in the Depression in the small town of Thayer, Neb. Working in the Anchorage bush as a construction worker, he also played occasional cook for the crew. His challenge: Calm and charm the hungry men pissed and annoyed when presented with salad for dinner. That’s when inspiration hit, and an early version of his ubiquitous dressing was born (around 1950). The guys in Alaska couldn’t eat enough of it. Buttermilk, sour cream and dried herbs whipped creamy was a taste soon to become as iconic as, well, the iceberg lettuce it dressed.

Henson relocated to California with his wife, where they bought a ramshackle property above Santa Barbara called Sweetwater Ranch, which they renamed Hidden Valley Ranch. It became a consortium: nightclub, motel and dude ranch. Lively and loud, it was populated, ironically, by local college kids. The Ranch’s salad dressing soon became a highly coveted to-go item. People piled in line, then carried it home in jars or took the dry version in used envelopes.

In 1972, the Henson family sold Hidden Valley Ranch dressing to Clorox for a cool $8 million. As is today, no person can copyright a recipe. Henson did, however, neglect to trademark the Ranch name. (Oops.)

In the 1970s, ranch dressing stormed salad bars from the West to the Midwest. After 10 years, Clorox finally figured out how to make the dressing shelf stable (which, thankfully, did not include its liquid bleach), and bottled Hidden Valley hit supermarket shelves in 1983. But, according to Abby Reisner, the author of the new cook book Ranch (Dovetail Press), ranch madness didn’t really go national until 1986, with the introduction of Cool Ranch Doritos. The combination of cream and crunch, a fusion of dip and chip, was to be the determining factor that proved ranch was a seasoning beyond salad.

It started to show up as a dip for fries, chips and chicken wings before making the strange transition to pizza. This is credited to Domino’s, which added chicken wings to its menu in 1994. Packets of HV Ranch were sent along with each order. Wings scarfed, scrofulous Americans dunked their pizza crusts in the left-over sauce, as a sort of second course. While the raunchy combination provoked a sense of sacrilege amongst Italian Americans, the taste combination is now fully normcore.

In fact, ranch, at this very moment, is the Shah Rukh Kahn of serious restaurant kitchens. This modernist passion is being applauded by ambitious chefs all across this country (and in this country only), who not so long ago shunned ranch as they would a turd in a tea glass.

As trendy as ranch has become, it’s certainly not immune to a cement load of contempt. The Washington Post, in 2016, insisted that “Ranch dressing is what’s wrong with America.” Described as too tangy, garlicky and overpowering, “it’s disgusting, and tastes exactly like what it is, which is milk that’s half-way rotten.”

To find out if the new ranch is worth the hoopla, on a recent night we taste-tested one of Hidden Valley’s newly rejiggered recipes, “Simply Ranch.” I can taste the sour cream and herbs from across the room, which is enough to lure me in and keep me there. My neighbor, Hal, loads chip after chip.

“I love this new sh**,” he says, washing his snacks down with soapy German beer as we watch a recent episode of “60 Minutes” on frontal terminal dementia (FTD). And regardless of what my neighbor suggests, ranch dressing does not cause FTD.

“But that’s me,” he cries, ticking off his dirty fingers: “I, too, display increasingly inappropriate behavior. A loss of empathy and a lack of judgment ... I swear to God, after a lifetime of smearing this crap on anything and everything, I’m done!”

Now fragile, Hal places his licked plate on the counter. “I’m giving up the ranch.”
I extend my sympathies. It’s a fate for some, worse than death.