Onion season: It's how you slice it 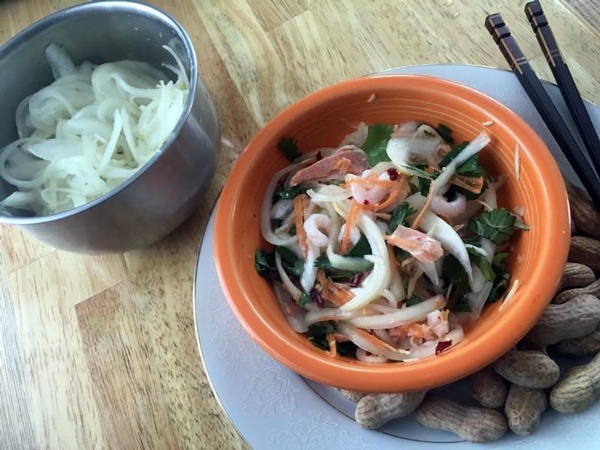 Ladies and gentlemen, the moment that we have all been waiting for, at long last, has arrived. It’s onion season!

You’re beside yourself with joy, filled with a special feeling that’s normally reserved for the likes of peach or morel seasons. Maybe Dungeness crab. You wake up in the morning and the first thing you think about is... Wait, what’s that? You’re not extra-stoked about onion season?

OK. I guess I can’t feign too much surprise at the lack of onion-love. I get it. Onion season doesn’t make the imagination salivate like Copper River Salmon season. It doesn’t roll off the tongue like cherry blossom season. It isn’t fleeting, like the others; because they store so well, onions are basically available year-round. Onion season perse is just a fancy way of saying “nothing to eat but onions.”

The expression to know one’s onions means to have knowledge about something. Kind of like knowing your “stuff.” I’ve been getting to know my onions, in a literal sense, for quite some time now. It’s getting to the point where I know my onions better than Adam knew his wife. My own wife would be jealous if she wasn’t so into onions herself.

Knowing one’s literal onions is central to surviving the winter. Or at least it was, back in the day, before supermarkets, when there really wasn’t much else to eat.

King Louis XV supposedly solved this winter riddle when he invented French onion soup. His Highness and his crew had arrived at some sort of hunting cabin or castle, only to find nothing in the pantry but onions, wine, butter and salt. Luckily, His Royal Culinary Genius was able to devise a meal out of just those ingredients, a meal that was destined to become a national treasure. I’ll give you my French onion soup recipe in a minute, but make no mistake: this article is about onion salad, my newest secret weapon of winter.

Because let’s face it. As stupendous as French onion soup is, it’s still possible to get sick of it if one eats it every day. And onion season is long. And the list of possible ways to make onion salad is even longer, long enough to help you outlast winter with all of your marbles.

It’s my wife’s onion salad recipe. She calls it “salad dressing.” It’s basically marinated onions, sliced thinly, that she adds to other vegetables, like romaine or kale, along with oil. I’ve been messing around with her little procedure for a while now, and its versatility is impressive. It’s helped me come to know onions even more deeply than ever.

Onions not only stay edible throughout the winter, they stay fully alive. Eating a living food, made of living things, is a special thing, especially in winter. Of course, a dish that includes copious amounts of raw-ish onions is not necessarily for the gastronomically – or gastro-intestinally – timid. But the longer the onions marinate, the ceviche, and after a few hours it wasn’t so poor. The next day I tossed my onion salad dressing with flaky chunks of leftover salmon, and let the marinade infiltrate and permeate its way in, and it was all the richer.

These winter salads can also approximate a species of Southeast Asian-style vegetable and seafood salad that’s often made with papaya and seafood. Some extra lime juice, grated cabbage and ginger, and maybe some peanuts in the mix, and you’re just a squirt of fish sauce and some crushed chili away from shrimp som tum. Crispy salmon skins are a decadent contrast to the sharply piercing onion salad.

Here is the foundation of all of these onion salads, my wife’s:

Peel the onion. Slice in half from tip to tip, and lay the cut halves flat on the cutting board. Cut the onions as thinly as possible, into thin sheets.

Combine onions with lime, vinegar and salt, stirring around until all of the sheets have broken apart into their concentric layers. The lime adds sharpness, the vinegar sweetness and depth. Then, start adding things. Put it in the fridge for an hour or two, and enjoy.

And here is that French onion soup recipe I promised:

Bake onions, sliced in half tip to tip, in butter and white wine, at 250, until they are as sweet as candy. Transfer the onions, and all pan juices, to a pot of simmering stock. Add salt, a bay leaf, a pinch of herbs de Provence, and simmer until the onion sheets melt away. Serve topped with broiled gruyere or baked brie crostini.

To know you onions in their wintertime grandeur is to know them in the Biblical sense, to love them daily. In raw form, in cooked form, in spicy and in sweet. Don’t take your onions for granted, because if they disappeared you would surely miss them.