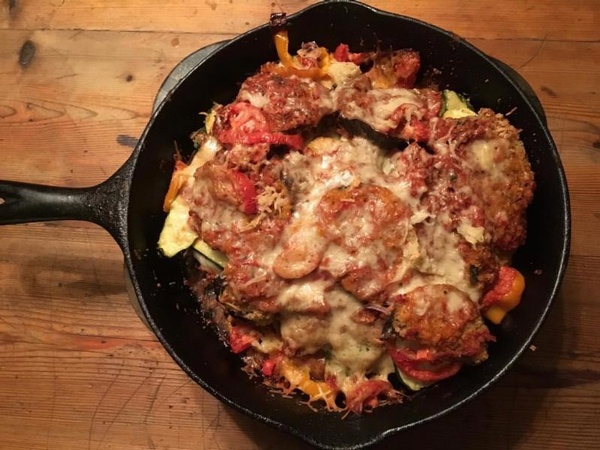 Armando Paolo, founder of Armando’s Pizza in my home town of Cambridge, Mass., had the kind of charisma that could make a kid feel cool with just a simple show of recognition. But the real honor was years later, when he showed me how he prepared eggplant cutlet.

He passed away a few weeks ago, just as I finally hit my eggplant stride and had something worthy of his attention. Not only is it really good; it comes together in about as much time as it takes to call Armando’s and order an eggplant sub with everything on it.

Growing up, when I wanted a sub , I’d just walk over and order one – often pausing en-route at Emma’s Pizza to puzzle at the menu before announcing to myself, out loud, that I was going to go to Armando’s instead. I did this to hear Emma recite all her Italian four letter words in rapid succession and for the thrill of dodging flying pizza dough.

My Instant Parma was built on what I learned and absorbed from Armando, but differs in several ways from his eggplant submarine sandwich that inspired me. The slabs of eggplant are thicker, as I don’t have a deli slicer. The dish is served in a baked pile, rather than a roll. And while Armando’s subs were tooled to be consistent, cookie-cutter copies of one another, mine change with the season and what’s in my fridge.

Back in the summer, when folks would practically pay you to adopt their excess zucchini, I would layer in some slices, along with peppers and fresh tomatoes when available. In winter it’s simpler, like some onion slabs and mushroom slices layered in amongst the cheesy, sauce-drenched eggplant cutlets. One definite no-no is meat. Eggplant is a meaty vegetable, and when prepared right can be as lusty as a steak.

The main thing is to have the eggplant and sauces ready ahead of time, and some kind of meltable cheese on hand. Armando used provolone; I prefer parmesan. Everything else is bonus.

To assemble, begin with a layer of eggplant on the bottom. This will turn out to be the best layer, as it will soak up all the drippings from above. Next comes sauce, then cheese and grated/pressed garlic. Now, add your zucchini, peppers, mushrooms, onion, olives, or whatever else you think might work. Then, another layer of eggplant, sauce, garlic and cheese. Because of variables in how the eggplant and tomato sauce were made, it’s best to add salt, if necessary, at the table.

And that’s it. Couldn’t be simpler, assuming the eggplant and sauce are in place. Maybe it took a bit longer than calling for a sub, unless you called at lunch time, but prep time is about the same.

The success and ease of this dish comes down to your sauces and cutlets. Here is what I do.

Cut the eggplant into ½-inch slices, either crosswise or lengthwise, and place them in layers in a colander. Sprinkle each layer with salt as you layer, at a rate of a teaspoon per eggplant. Let sit and drain for at least an hour, ideally longer, then gently press on the eggplant with a plate to squeeze out more water. Toss the slices in olive oil, about a third of a cup per four eggplants. Double the oil if you wish, depending on how much you like olive oil.

Dredge each slice in seasoned flour (1 tsp pepper, garlic powder and paprika, and a half tsp. nutmeg for each cup of white flour), then plunge in a bowl of beaten eggs with a splash of milk, and then bread crumbs or panko flakes.

Lay the cutlets on a tray and bake at 400. As soon as you catch a whiff of browning, turn them. Remember, the bottoms will brown first, so be vigilant. When golden on both sides, let them cool to room temperature. Pop the whole tray in the freezer, and transfer the frozen cutlets to freezer bags and freeze.

Virtually any uncommitted tomato sauce will do. By “uncommitted” I mean they don’t have any strong flavors that would clash with certain dishes. You don’t want to use homemade ketchup, for example, because you don’t want the cinnamon, clove and sugar.

I have two uncommitted tomato sauces that I go to when parm calls. One is a simple oven sauce that’s just tomatoes and a tad of salt. It’s simple but has a huge flavor. My other sauce is uncommitted salsa (which, you know, basically means tomato sauce in Spanish). The salsa doesn’t have cumin or cilantro or anything crazy like that. Only ingredients that happen to go well in a parm, like tomatoes, onions, peppers and garlic. Sometimes I’ll use one sauce, sometimes the other, and sometimes I’ll even mix them.

I don’t have space for the salsa recipe, but you could easily adapt this recipe, which uses fresh tomatoes, to use canned, fire-roasted tomatoes.

Cut the tomatoes in half and lay them on a cookie sheet, cut sides down, and roast at 400 degrees until the tomatoes collapse into round, wrinkled piles. Remove from oven. When the tomatoes are cool, lift off the skins and squeeze them between your fingers so the juice falls back onto the tray. Or leave the skins on for a little more texture.

Dump the remaining juicy pulp into a thick-bottomed pot. Blend it first if you want, but I like it chunky. Simmer on low heat for an hour or two – until it reaches your desired thickness. Season with salt. The sauce can be frozen or canned in sterilized jars, adding a tablespoon of vinegar for each quart for acidity.

Pretty much any mild-mannered tomato sauce will do, if you’re in a pinch. And if you want to finish it with an Armando’s flourish, serve it with chopped tomatoes, onions, and hot and sweet pickled peppers. AKA everything.