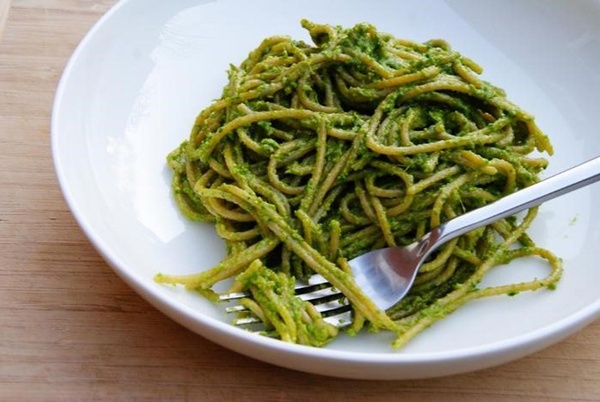 In Genoa, Italy, the birthplace of pesto, it goes without saying that the sauce is made with basil. Genoese basil, to be exact. Pesto is so big in Genoa that the airport had to loosen its rules, allowing travelers to bring more than 3 ounces of liquid in their carry-on baggage, providing that liquid was pesto. They screen it with the machine used for medicine and breast milk.

The further you get from Cristoforo Colombo Airport, it’s the rules of pesto that loosen. Other types of basil aren’t frowned upon with such animation. Here in the New World, it isn’t a given that pesto even contains basil, and chefs have taken to adding “pesto” as a suffix to the name of the mashed up leafy green du jour.

In other words, you can essentially toss the whole darned garden into your blender, add olive oil, garlic, cheese and nuts, and presto, you’ve got pesto. You can do the same with many of the weeds you pull from your garden – dandelion, plantain, purslane and lambs quarter – as well as the wild plants growing in your neighborhood, like nettles, wild mustard, ramps and miner’s lettuce. And you can do the same thing with many of the items you would have put in the compost, like celery leaves, turnip greens, radish leaves and carrot tops. I even found a recipe for carrot peel pesto. Wait, what?

The word “pesto” comes from the Italian pestare, which means “to crush, grind, pound.” It’s derived from Latin pisto, which means “I pound.” In addition to being the root of “pesto,” this etymology also gives us the word “pestle,” which was, along with the mortar, the tool of choice for pesto making back in the day.

So does that mean that we can really start referring to mashed carrot peels as “pesto?”

Sure, if I can start calling mayonnaise an oil/egg “pesto.”

As with pesto, the first batches of mayo were made in a mortar and pestle too. And while I am a sucker for any implicit or explicit reference to mayo, I also can’t get behind a pesto that does not contain chlorophyll.

It was a batch of spinach pesto that solidified my thinking. I made it because I had too much spinach on my hands, and pesto has a way of making large piles of leaves become very small. This batch, made with olive oil, Parmesan and cashews, was oddly satisfying, despite the fact that the flavor of spinach is so much subtler than that of basil. But spinach is about as high in chlorophyll as a leaf can get, and the resulting pesto, a dark, deep shade of green, was full of it. Since then, maxing out the chlorophyll density has been my goal when making pesto.

When I recently followed a recipe for romaine lettuce pesto, I found the result completely unsatisfying. So I added some dark leaves of kale and chard and got it back on track. Another time, I made a batch of radicchio pesto. It was purple and creamy and bitter, a flavor that I’m just fine with. Delicious, to be sure, but not the flavor of pesto. It lacked the minerally embrace of green plant blood.

Basil is a wonderfully aromatic vessel for chlorophyll, and is probably still my favorite leaf from which to make pesto, but spinach is a close second. After that, I prefer the weeds, like lambs quarter, or wild plants like nettles, both of which have bold, chlorophyll-dense flavors. Mixing and matching your leaves adds complexity to the pesto and is highly recommended.

When basil is in season, I focus on that, and make enough to freeze for year-round use. While I typically add nuts, garlic and cheese to my fresh pesto, when I make it for storage I keep it very simple: just olive oil, basil and salt. I don’t skimp on the olive oil, neither in quality nor quantity. The pesto should be fluid enough to set off an airport liquid detector, after all.

So, add enough oil to create a smooth vortex in your food processor, and the basil gets pureed as quickly as possible. What you don’t want to do is skimp on the oil, such that the pesto looks like a half-digested hairball the cat spat up. This basil will become dark in the freezer, if not black, and won’t store well. I pack into half-pint mason jars, freeze, and let them thaw out slowly in the fridge before using.

To convert this freezer-stable basil mixture into proper pesto, I make a paste of the missing ingredients, nuts, cheese and garlic, in the food processor. It makes sense to leave these out of the freezer, because they don’t age well in the fridge, and their flavors are much more vivid when used fresh.

As for nuts, pine nuts are the classic, Genoese choice, and you cannot go wrong with them. But the list of alternative nuts that are acceptable outside of Genoa is almost as long as the list of leaves. Walnuts, pistachios, hazelnuts, macadamia nuts, cashews, pecans and almonds, to name a few. I recently made a batch with Italian lemon almonds. It was so successful that I’ve been grating lemon zest to my pesto ever since. And since lemons are in season during winter, that’s another fresh touch you can add to your stored basil in the off season.

So consider this a call to action. Now is your chance to pestare while the leaves are green. That frozen chlorophyll will come in handy about six months from now.