Pomegranate power
We are lucky to live in an age of pomegranates. 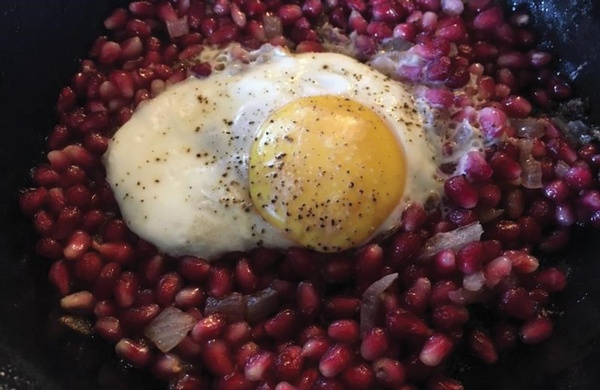 We are lucky to live in an age of pomegranates. With more pomegranates being grown and consumed than ever before, the inevitable pomegranate renaissance is upon us.

In California, the pomegranate harvest is in full swing. About 95 percent of the crop is the large, dark variety called Wonderful. California’s 2017 yield is expected to be a bit light, as the trees recover from a multi-year drought. But the quality is expected to be high. Expect California pomegranates to be larger, juicier and sweeter. But maybe not cheaper.

Worldwide, pomegranate consumption is on the rise, and there is also demand from cosmetic and pharmaceutical industries, all of which makes for attractive pricing on a fruit that grows by the hundreds on a healthy tree. The trees are low-maintenance, and can adapt to many conditions, including heat and drought. The No. 1 producer of pomegranates, India continues to expand its pomegranate acreage by replacing dried-up apple orchards with pomegranates. Spain and Italy have invested in recent years as well, aiming to feed a growing European demand, while China has invested the most, including large plantations of soft-seeded Tunisian pomegranates.

While entering new landscapes, like California, Spain and Kenya, pomegranates are an ancient fruit with a deep history in Central Asia, Persia, the Middle East and the Caucuses. Cookbook author Feride Buyuran is from Azerbaijan, which is like being from all of those places at once. From an early age, she told me by email, she saw pomegranates everywhere.

“In front yards, in back yards and randomly even in parks. They’re cheaper than apples,” she says. “There are dozens of varieties, some sweet, others tangy, some with dark ruby arils, others with light pink and even white.”

The arils, of course, are the fleshy seeds inside that tough-skinned sphere. And there are many ways to get them out. A peeled pomegranate looks like the world’s biggest and most delicious cut jewel but takes a little work. Buyuran’s website, azcookbook.com, has a video in which she demonstrates how to quickly remove the arils by cutting along the membranes rather than through them. Alas, I usually end up clawing it apart and dumping the arils in a bowl of water so the membranes float out. But I don’t try to remove every last shred; the membranes contain many of the fruit’s beneficial compounds.

Buyuran has also posted a recipe for a dish called narnumru, from her new book Pomegranates and Saffron, a culinary journey to Azerbaijan. It’s basically fried eggs atop fried pomegranate arils, which burst open in the pan’s heat and steam the eggs. It’s a shocking dish, both visually and intellectually. But in your mouth, it all makes sense.

She starts with a half-cup chopped onion in a pan with butter and olive oil. When the onions are translucent, she adds 2 cups of arils (for two eggs), and fries them for a few minutes, before cracking the eggs on top, and covering briefly. If you have a glass lid you can watch the eggs turn white before your eyes in the pomegranate steam.

Everyone in my house thought the idea of eggs on pomegranate would be awful – even those who professed to love both pomegranate and egg. I made a batch, personalized with bacon and browned bits of deer meat. The haters were wrong, of course. But they never got to find out how wrong they were, because I ate it all.

Soon enough, I was marinating meat in pomegranate juice, as Buyuran told me she does. If you don’t have venison, any red meat, especially a strong-flavored meat like lamb or goat, is wonderful in a pom juice marinade.

Buyuran said back home the juice is simmered for long hours to obtain pomegranate molasses, or nasharab, a prized condiment, especially with fish.

By far, the simplest way to cook with pomegranate is to make what you are going to make, and then sprinkle fresh pomegranate seeds on it. In much the same way a sip of coffee helps eggs, and wine helps prime rib, a pomegranate helps both. A handful belongs atop a bowl of linguini with mushroom sauce, and on your morning Cheerios.

That’s why, once you jump on board the pomegranate train, you stay on. Wherever it goes.