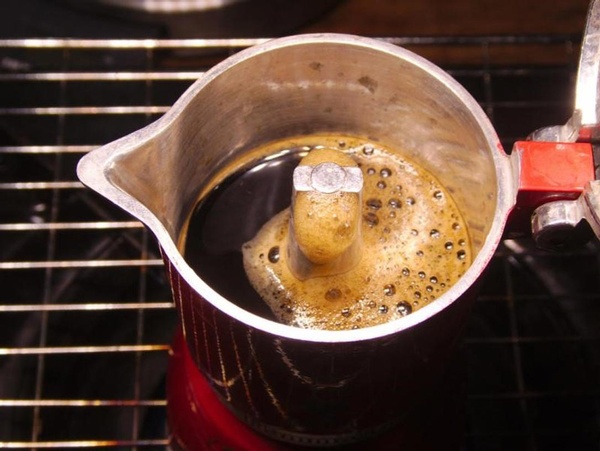 The southwestern edge of Hawaii’s Big Island includes the Kona and Ka’u coasts, both of which boast coffee plantations carved into old lava fields. The climate in this region is perfect for coffee, and my suitcase brimmed with bags of local, freshly roasted coffee. Alas, not one of our AirBnb rentals stocked a decent coffee maker; even a French press. Each time I opened my suitcase in a new rental, I was tortured by the release of air-borne coffee particles, while upon the kitchen counter sat the same worthless Mr. Coffee machine that had stalked us from place to place. Dante would have been impressed with my fate.

I did not bear this injury without a fight, aka without wasting inordinate amounts of expensive coffee trying, and failing, to brew a decent cup. I adjusted the ratio of coffee grounds to water, adjusted the grind, but it never tasted nearly as good as it should have.

I had the bailout option of going to a coffee shop with an espresso machine. The beans usually weren’t local, but I was able to get good coffee and be reminded of just how bad things were at the rental.

I’m a sucker for the clear tones and dull, syrupy bitterness of espresso, which is made by forcing pressurized boiling water through finely ground coffee. Even when it’s made with a better machine, drinking drip coffee is like watching a mud wrestling match at a nudist colony: a lot going on; not exactly sure what to make of it. Espresso, mean-while, is like pinching myself watching live opera.

Obsessing over coffee in Hawaii sharpened my palate, which bore some unintended consequences when I returned home. It was like Hawaii all over again; I was making bad coffee with good beans. Except this time it was my own coffee maker, a Moka stovetop espresso maker, and with beans from a talented roaster. By this point, only one shop in town made espresso I could drink.

I turned my nerd powers toward mimicking that flavor. I even purchased a bag of their beans, foregoing the superior beans of my guy for the sake of eliminating that important variable.

I also tossed my old aluminum Moka pot, which I suspected of harboring bitter flavors, and bought a stainless

steel version. The Moka pot is a type of stovetop espresso maker that uses steam pressure to force boiling water up through the coffee grinds. It screws apart into three pieces: a bottom of which is filled with water, the middle

of which holds espresso grounds, and a top part that will hold the finished coffee, after the water down below boils and steams its way through the grounds and up into the upper chamber. A Moka pot is the next best thing to a “real” espresso machine, which forces the boiling water down through the grounds and into the awaiting shot glasses. The fancy machines can generate greater pressure, but I’m not convinced that helps.

(A real espresso machine can also steam milk, but I use heavy cream, which is thick enough as it is, and doesn’t even foam very well anyway, but it’s still better.)

I also purchased a burr grinder, which grinds the beans between hard plates rather than by way of a dull spinning blade found in a typical coffee grinder. A burr grinder produces a more even, controllable grind, and can grind the beans much finer, which is crucial for espresso. The beans should be freshly roasted (within the last three or so weeks) and ground right before use, which maximizes the flavor and primes the air in the room with the flavor of the coffee you’re about to brew.

Then I set out to learn what they are doing at my favorite shop. Nothing gets a barista talking faster than a $5 tip and some nerd questions about coffee. That’s how I learned about the ristretto pull. Ristretto translates to “restrained” in Italian, and refers to the fact that the amount of coffee in a ristretto shot is less than the amount in a normal shot but is made with the same amount of beans. While you get less espresso from the same amount of beans, the espresso is of higher quality.

The idea of a ristretto shot is similar to the first cold pressing of olive oil, or the skimming of cream from milk. Imagine you spilled some chocolate chips onto the beach; if you scoop them up with big handfuls you will get a lot of sand, but if you use restrained handfuls you will only get chocolate chips and no sand. Put another way, a ristretto shot contains a higher proportion of good stuff, like sweet, roasted, nutty brown flavors, and a lower proportion of the bitter, grassy and sour flavors we typically dislike.

I went home to my $34 stainless steel Amfocus Moka pot, aiming to make a ristretto-based Americano that rivaled that of my favorite shop, which uses a $21,000 Syneso. I began with an experiment to test the theoretical foundation of my approach.

I made a pot like I always do, filling the lower chamber with about 400 ml of water.

When the finished coffee began spilling into the upper chamber of the pot, I began pouring it out into separate cups, sequentially. The first cup contained the first coffee to emerge, analogous to the ristretto. I poured four separate samples this way, with the final cup consisting of the dregs, the last bit of finished coffee to be prepared from those grinds.

The first cup was pure gold. It was coffee elixir. It was the top of the mountain. And the second cup was nearly as good. But the third cup, not so much, and the forth cup was awful. I did not want the second half of that pot of coffee.

So now when I brew, I only add half the normal amount of water to the lower chamber, which results in about half the amount of finished coffee in the upper chamber, which I dilute with water up to 8 or 10 ounces of perfect coffee. The only way to make it more perfect would be with cream.