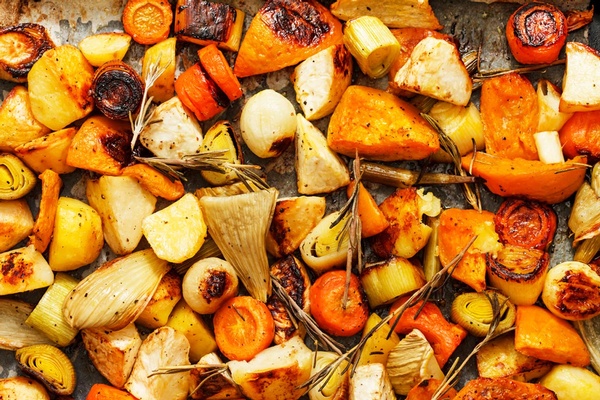 Roasted roots are a culinary rite of fall. To not eat them as the leaves fly would be to deny the intersecting realities of time, place and flavor. Forgoing the roasted roots would be as unthinkable as not serving cake at a birthday party. And like making a cake, roasting roots is more of a general approach than a singular recipe.

Roasted roots are the quintessential side dish, served alongside the roast beast or whatever else comes out of the kitchen this time of year. They can be the main event as well, and you won’t feel deprived. Today, I’m going to focus on a dish that builds on roasted roots, using them as an ingredient.

This dish, Roasted Root Mayonnaise, can itself be used as an ingredient in yet another finished dish: Roasted Root Falafel. By this time, it should be clear that there is literally no limit to the amount dishes and meta-dishes that can be prepared from a core of roasted roots. So let’s start with some roasted root basics.

I shy away from using turnips and rutabagas, as they can be spicy. Onions are too watery, and beets make everything purple. So I stick with carrots, potatoes, squash and garlic. If celery root – aka celeriac – is available, I’ll use that too.

Many people choose to add to the work of cooking by peeling their root veggies first, while others will take the opportunity to wax “healthier-than-thou” about all of the nutrients that are being thrown away with the skins. The truth varies by vegetable. The skin of a carrot is hardly any different from its interior, so by peeling carrots you are basically throwing away carrot. Potato skins, on the other hand, are more nutrient-dense than the tuber’s interior.

Ditching that skin means losing 90 percent of the potato’s iron content, half its fiber and significant amounts of calcium, potassium, magnesium and vitamin B6. As for winter squash, the skin of every variety is edible. It just depends how you feel about extra fiber. In all of today’s recipes, leaving the skin on is preferable. It adds a pleasing chewiness to whatever recipe is your final destination.

To ensure even cooking, the roots must be sliced into consistent shapes. If some pieces are thick while others are thin, the thin pieces will start to burn before the thick pieces are cooked through. For snack-style eat- ing, I thin-slice my roots so they bake into crispy oven chips. For a side dish to ac- company, say, the roast beast,

I leave the roots chunky, about a half-inch thick. The same goes for roasted root mayonnaise: you want the pieces on the chunky side, so there is a creamy interior with which to work.

To make roasted roots, toss your sliced roots in olive oil and then mix in some garlic powder, black pepper and salt. Spread them on a tray and cook at 350, stirring occasion- ally, until they are done. About an hour. If you want to cook hotter and faster, you’ll have to stir more often in order to prevent burning.

There is currently a legal battle brewing over the exact definition of mayonnaise, as part of the mayonnaise and egg industries pushing back against the success of egg-free, vegan versions of this beloved condiment. For our purposes, mayonnaise is a creamy condiment that can be dolloped and spread.

Years before vegan mayonnaise was sold in jars, I learned the ways of vegetable-based mayonnaise from a vegan chef in Brazil. She made a potato salad that was held together by what she called “carrot mayonnaise.” Unlike the usual lily white mortar that bonds and lubricates potato salad, her carrot mayonnaise, in its bright orange glory, was little more than steamed carrots that had been whizzed with oil in a food processor.

I prefer to roast, rather than steam, because it adds pleasing texture, in the form of the chewy brown crust that develops as the root pieces cook. The resulting puree will be much less smooth and creamy than typical mayo, but the chunkiness adds a rustic feel to the dish, which complements the season.

Slice your roots to about a half-inch and roast them. When cooked to your satisfaction, allow to cool. Put a half- cup of olive oil in a food processor, along with a small clove of garlic. With the blade running, add the roots, a few at a time, to the vortex. Add more olive oil as necessary to keep the vortex going. Season with salt, and if desired, other herbs or spices – anything from Herbs de Provence to Berbere powder will work. For an even more rustic approach, skip the food processor and just mash your roots together. And why not add some butter while you’re at it?

Serve your roasted root mayo – or mash – with any- thing. It’s a spread, a gravy sponge, or a base in your bowl onto which more food can be piled. And if it ends up being the only thing in your bowl, you’ll be just fine.

I recently made a batch of roasted root mayo that was too heavy on raw garlic, so I cooked it again, in order to mellow the garlic edge. I patted my roasted root mayo into balls and baked them at 350 until they were crispy.