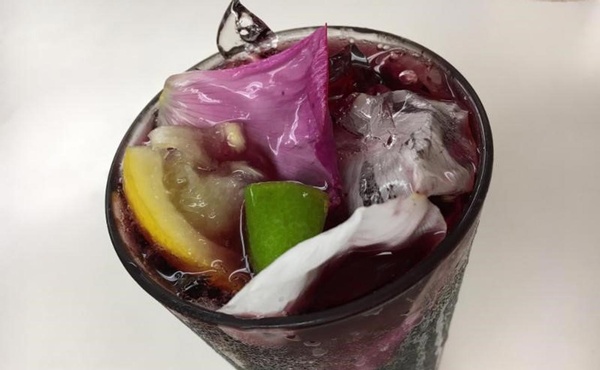 The summer solstice has snuck by, again. Depressing, I know, but as our hemisphere prepares for its date with winter, there is no need to overthink the situation. The roses are still fragrant, and the tomatoes are still ripening, because the heat has only just begun, and we can’t lose sight of the big picture: this is a very good time to drink sangria.

By sangria, I mean a spectrum of wine and fruit-based cold drinks, some of which have more merit than others. At one end is the famous Spanish punch made of wine, fruit, juice and liquor that’s adored by sun worshippers, tourists and underaged drinkers. This end of the spectrum is one of incomprehensible complexity, as there are too many permutations of all ingredients, plus shots of simple syrup, 7-Up and the like to keep track of. One popular variation, for example, is the Italian-American version of the Eastern Seaboard, which contains brandy, triple sec and peach schnapps, along with the fruit. You will find these ingredients in the award-winning sangria pitchers at Spain Restaurant in Cranston, R.I., and in the shared kitchen of a certain Cape Cod vacation spot, where a certain clan of Italian families shows up every solstice like clockwork to share a kitchen with my family (long story).

One of the clan matriarchs told me her recipe and shared this nugget: while most recipes call for merlot or cabernet, she advises a red burgundy. It’s drier, she says, and “has that woody taste.”

I enjoyed the fact that a celebrated French wine is the secret ingredient in the Italian-American version of a Spanish drink and filed it away just in case. But to be honest, I was having trouble getting excited about her sangria. It was both too delicious and too alcoholic. This may sound like a win-win, but I find it counterproductive to add extra sugar so you can add extra booze. Summer

may be gone in the blink of an eye, but it’s also a grind, and I want to keep cool, keep hydrated and keep going. When I keep going with the Italian sangria, I wake up sunburnt in a pool chair.

I prefer the other end of the sangria spectrum. The side that’s bitter, simple and bubbly. It’s called Tinto de Verano, which translates to “red wine of summer.” In Spain, it’s what the locals have settled on as the ideal antidote for the Iberian heat. Credit for its creation is given to the Andalusian restaurateur and bullfight promoter Federico Vargas, but credit is hardly due. It’s such a simple recipe that its creation was inevitable.

This much is found pre-mixed in Spain, because they know a thing or two about beating the heat. For this task, Tinto de Verano is an absolute beast. The lemon and lime fine-tune the flavor, as the cold and bubbles do their things. It’s numbing and stimulating. Pleasantly exhilarating. This simple drink can be doctored in many ways. Ice, for example, is a great way to chill it if your glass and ingredients were not already frigid. Squeezed slices of lemon and lime, mean-while, will significantly enhance the citrus pizzazz.

A shot of lemonade here, a dash of vermouth there – to the point you have basically made sangria. And as the Italians and others have shown, there is plenty of room for exploration on the fruity side of this continuum.

Not so much on the dry side of the sangria spectrum, although the use of lemon/lime soda, while clever, does leave an opportunity to improve. After all, that Sprite is still added sugar, which enables the intake of more booze. By replacing it with lemon and lime juice and bubbly water, we can let the bitter flavors out to play.

For some, bubbly is like a seventh flavor. The way some people want hot sauce on their food, bubble lovers

want bubbles in their drink. I’m a sometimes bubbles person, but I find them absolutely essential here. Bubbles enhance the bitter tones of lemon, lime, oak and tannin, and stimulate the tongue in the absence of sugar.

This version is a legit “session” beverage, one that you can drain and repeat for the duration of most any event without issue, from game day to corporate retreat, clam bake to safety break. Without the sugar highs or alcohol lows, you can keep the ship steady.

On a whim, I dropped into Vintage MV Wine & Spirits in Edgartown, Mass., to see if they had any burgundy. Based on what Diane had said, I figured it had a place on the sangria spectrum.

But red burgundy is spendy, explained the owner, and finding a good value is tough. For my purposes, he advised, go with a pinot noir (the “Burgundy” grape; the name means “black pine”) grown outside the region. Alternatively, you can use a non-pinot red from within Burgundy, such as a Gamay, which produces a wine that’s similarly dry and lusty, and at a much better price.

I went with the Gamay, and as I’d hoped, my drink got even drier. Here is my recipe for extra-dry Tinto de Verano. It is optimized for maximum hydration, minimal sugar and just the right level of buzz to keep you going, not slowing. I call it Verano Seca, which means “dry summer.”

If you have access to unsprayed roses, wild or domestic, I recommend harvesting some petals and using them in this drink.

The taste is so dry you can actually sweeten it with more wine, or a squeeze of citrus. The roses don’t add sweetness, but they do have a sweet smell that you can enjoy while you’re drinking the Verano Seco. Because when you’re smelling roses while drinking sangria, you are ready for summer.