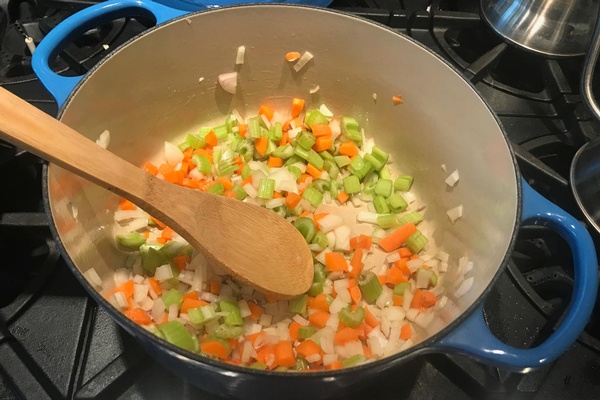 Spring has begun its tantalizingly slow reveal, but winter isn’t done with us yet. This means the soup can go on for a few weeks longer before it’s time to think about salads. At the winter market last week, I found carrots, onion and celery root, which were all I need to make anything into soup. These three ingredients are what you need to make mirepoix (mere-pwah), a chopped mixture of aromatic vegetables that is used as a base for many soups (and sauces). There are many regional variations of mirepoix that go by different names and involve the occasional substitution of ingredient (leek for onion here, bell pepper for carrot there). Today, we’ll stick with the French way,
which is how I learned about it. That being said this may be the closest thing to a French cooking lesson you will ever get from me.

Today I will discuss using mirepoix to enhance two easy soup recipes. Cheater’s Chicken Soup makes use of one of my favorite ingredients: rotisserie chicken. The other recipe, Haut Ramen (that’s “Top Ramen” in French, for the unfrozen cavemen in the crowd), employs mirepoix in the preparation of packaged Ramen noodle soup.

Since both recipes include the part where you have to make the mirepoix, let’s review that step. Trim and mince equal parts onion, carrot and celery (or celery root, aka celeriac). If using celery stalks, include the leaves. Cut it all into consistently sized chunks, large or small as the recipe calls for. The Haut Ramen requires a brunoise, which is French for “finely diced.” Making brunoise is a technique that’s more effectively shown than described, so check it out on YouTube.

that the bones are almost spoon-tender, can make a really good soup, even if the kids eat half of it on the way home from the store, I can cheat my way into a pot of soup on just half a chicken; thanks mon mirepoix!

Rotisserie chicken, whole or partial (or a home-baked chicken if you have the foresight)

Gain control of the remains of the chicken, pull it into pieces, and remove the bones. Snip the bones and tendons

into small pieces with cooking scissors, and place them into a pasta basket or similar arrangement that can be submerged in boiling water, along with its contents, and can just as easily be removed from the water. One could also put the chicken skin in the pasta boiler to make the soup more oily, if that’s your thing. Heat the water and simmer the bones while you get the rest of your mise en place, which is French culinary-speak for arranging your cooking materials.

The next step is to cut the mirepoix and saute? it gently in olive oil, allowing a mild brown to develop.

While the mirepoix is browning and bones are simmering, cut or pull the chicken meat apart to the consistency you wish, and add the meat to the browning mirepoix, allowing it all to cook together for a moment. This would be a good time to play around with herbs and spices. I like thyme, but you could go ginger/lemongrass, or my mom’s favorite: dill.

The soup can be taken in many directions at this point. Remove the pasta basket with bones inside, add the mirepoix and chicken to the pot, and place the basket of bones back in the pot. At this point, I add some frozen

tomatoes from last summer’s stash to the basket, so the tomato skins can be removed along with the bones and skin. I also add a pickled jalapen?o or two, allowing it to contribute gentle heat and acidity to the pot without getting lost and giving someone a hot surprise.

The soup will be ready as soon as the carrots are soft enough to eat. But if possible, take a little extra time and let everything cook together for an hour or so. As it cooks, tweak the seasonings as necessary: a little salt here, a bit of garlic powder there, a lil’ soy sauce, a squirt of fish sauce, squeeze of lime, until it tastes right. Then drop a dollop of mayo on that masterpiece, and you’ve got some evidence in hand that sometimes cheaters do win.

While it’s true that a good mirepoix elevates the ingredients around it, there’s no reason to literally use Top Ramen brand when there are others to be had, like Sapporo Ichiban, or pretty much any other random brand you might find, that will be better in quality. And if you’re up to a challenge, start with mirepoix and add what you need to make a broth that’s yummy enough that you can skip the flavor packet. Save that packet for a rainy day; you never know when you might want a blast of savory flavor.

Seaweed (a ripped-up sheet of nori, or furikake seasoning)

Heat the water. Add brunoise mirepoix and flavor packet. When the water returns to a boil, add the noodles. When the noodles are done, add your egg, if using. Wait a moment, then turn off the heat. Leave the egg whole, or give it a minimal stir with a fork, depending on how you like your yolk, then put the lid on for 2 minutes or so. Remove the lid. If egg is done to your liking, sprinkle with seaweed, drizzle with sesame oil, and start slurping. Keep slurping until the birds are chirping.