Tabbouleh that goes against the grain 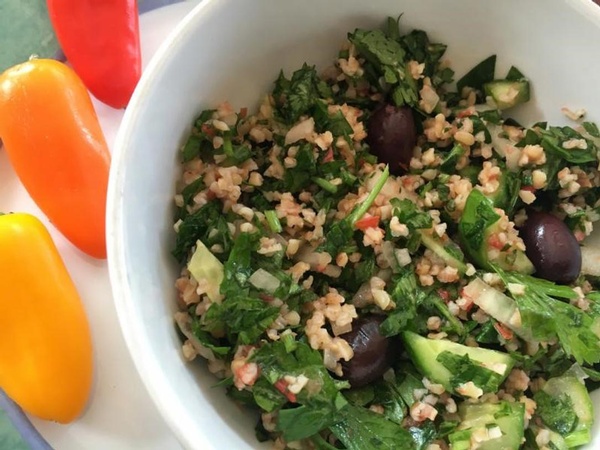 When I used to frequent the IHOP and other such establishments with my homies, I would raise eyebrows by eating the parsley that garnished my sandwich or pancakes. Not the delicate flat-leafed parsley, mind you, but the curly kind that tastes like green steel wool. “Nobody eats the parsley,” I was informed, erroneously.

I don’t hang out with knuckle-draggers like that anymore, but garnishsized portions of parsley remain the rule, rather than the exception. But one noteworthy exception is tabbouleh (aka tabouli), the Mediterranean parsley salad. And I have a tactic for making tabbouleh that will blow the doors off of any other you’ve tried. If this doesn’t get some parsley into your belly, then it’s time to delete your mouth.

My trick comes by way of a farmer friend, as many of my best tricks do. Farmers know how to prepare vegetables in simple, easy ways that make them shine brightly. In addition to being a way to eat parsley, tabbouleh is also a vehicle for many other ingredients that are currently in season, including cucumbers, garlic, onions and, most importantly for our purposes today, tomatoes.

The making of a typical batch of tabbouleh begins by cooking the bulgur wheat, also known as chopped wheat grains, while gluten haters often use quinoa instead. Instead of cooking the grain, my farmer friend opts to puree a mess of the juiciest tomatoes available, with garlic, and rehydrate the grain by soaking it in the resulting slurry.

Currently, many tomatoes are sagging under their own weight on vines and windowsills near you. At the end of the farmers market, growers will often cut deals on the extra soft and juicy specimens that are too unstable to survive the trip home, or to unload to restaurateurs.

Those fruits, the kind you can barely even slice in half without flooding the kitchen, are exactly the fruits you want to use in tomato juice tabbouleh.

Another alternative is couscous. Quinoa, I’m sorry to report, refuses to absorb the tomato juice. Couscous absorbs the juice faster even than bulgur. The downside of tabbouleh made of couscous is you have to eat it

sooner rather than later, because it will continue to soften. Another option, buckwheat, will absorb the juice if you soak it overnight, but I don’t recommend it. The texture is chalky, and the flavor is wrong.

Once you’ve decided on your grain, pick a recipe. There are countless recipes for tabbouleh from which to choose. Virtually any of them can be easily modified by soaking the grain in tomato and garlic puree. Below is how I do it.

1 cup onions, finely chopped (or minced in a food processor)

2 cups cucumber chunks, small or large
2-plus cups of soupy tomato puree
2 cloves garlic, plus or minus, to taste. Grated,chopped or pressed
1⁄2 half cup extra virgin olive oil
3 tablespoons lime or lemon juice plus more to taste 1⁄2 tsp salt-and then to taste
Small handful mint leaves, chopped
Optional: olives, whole or chopped
Mix and match whatever tomatoes are available and juicy, from lipstick red slicers to yellow cherries to mottled, funky heirlooms. With low-acid tomatoes like Brandywines, you may need to add more lemon/lime.

If you can cut the tomatoes into quarters without spilling any juice, do so. Otherwise put them whole into the food processor. Add a pinch of salt and the garlic, and blend into a slurry. For every two cups of this pinkish soup, mix a cup of bulgur wheat, along with the lime juice. Let it sit for two-three hours.

Before washing the parsley, untie the bunches and look through them, picking out any yellow or rotten leaves. Assuming no slime, decay or other such nastiness, wash the bunch by gripping the stem end and dunking the leaf end in a big bowl of clean water with a tablespoon of vinegar. If the water stays clean, you’re done. If the water’s dirty, change and repeat until it stays clean after dunking.

Holding the bunch by the stem end, chop the leaves. A sharp knife is advised, which won’t crush the leaves as it cuts. Most recipes call for cutting the leaves finely. I like some coarsely cut leaves in the mix as well.

If using mint, add it a little at a time, because a little can go a long way.

Combine the ingredients in a bowl, including salt, onion, cucumber and olive oil. After mixing, adjust salt and lime if necessary, and mix again. It’s ready to eat immediately, but if you let the ingredients get to know each other better over the course of an afternoon, that bonding will pay off. Either way, you will eat a lot of parsley, and you will love it.