Taking the mainland by tsunami 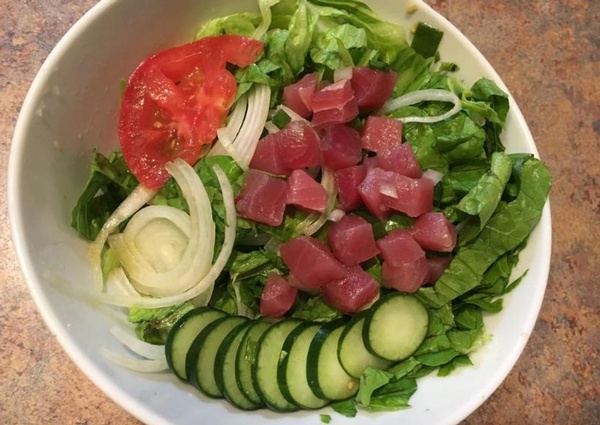 Around half-past eight the other night in the small Hawai’ian town of Naalehu, which happens to be the southernmost town in the U.S., I walked into Shaka, America’s southernmost bar. “Sorry, sir, the kitchen is closed,” said a nice man behind the counter with a shaved head and wispy goatee. “What about poke?” I asked. He directed me to a refrigerated Coca-Cola case.

Poke, pronounced poe-kay, is the Hawai’ian version of sushi. It consists of cubes of raw fish, most often ahi tuna, tossed in flavorings. Conspicuously absent is any acid like lime juice, which would cook the poke into ceviche. Without such acid, poke is officially raw. In addition to ahi, other Hawai’ian fish like ono and mahi mahi can be made into poke. More recently other fish like salmon or yellowtail have been discovered to make great poke, along with octopus, shrimp and other shell-fish, both fresh and frozen. Hawai’ian poke is regularly made with ahi that isn’t fresh, carefully identified as “previously frozen” when sold in stores. To those of us who don’t live in Hawai’i, this is your cue that it’s possible to make poke at home that a Hawai’ian would eat.

Hundreds of restaurants on the mainland have figured out as much in recent years, with the number of poke outlets more than quintupling. There are more than 600 poke-eries nationwide, in almost all 50 states.

Until I opened America’s southernmost vintage refrigerated beverage display case, the best poke I’d had on the Big Island was from ChoiceMart, a grocery store in Captain Cook. On the mainland, of course, buying raw fish at grocery stores with names like FoodLand or 7-Eleven constitutes risky behavior, but it’s different in Hawai’i. There are people here who understand how to handle these types of fish, tossing them with various proven permutations of spices, onions, sauces, oils and other goodies like kim chi or flying fish eggs.

Poke was originally a verb that meant “to cut or slice crosswise into pieces” in native Hawai’ian. To this day, when ahi is sliced properly the grain is visible. Along with the cubes of fresh ahi, the original poke included salt, seaweed and kukui nuts, aka candlenut, named after

the fact that lamp oil can be extracted from them. Strung onto beads, candlenuts were burned for light; the duration of a single nut’s burning was used as a measure of time. Fishermen used to chew and spit the nuts into the ocean to cut the glare and give better visibility into the water from their boats.

Over the centuries, other ingredients were incorporated into the palate of poke seasonings. First onions, then tomatoes and so on. But the poke recipe that has taken much of the world by storm in recent years is the shoyu-style, aka soy sauce, sesame oil, scallion, ginger, sesame seeds, chili peppers, salt, pepper and sometimes kukui. Shoyu isn’t my favorite poke from the Choice-Mart, or anywhere else. I much prefer the spicy ahi, which includes mayo, hot sauce and green onions. I also enjoy a creamy wasabi version with pistachios. Third place goes to the so-called Hawai’ian-style, which includes limu seaweed, salt and ground kukui.

I opened the glass door to the fridge and looked at the poke. The edges of the fish cubes were sharp, and the cut faces glossy, meaning the cuts were fresh. It looked much better than what I’d seen earlier that day in Hilo, at the venerable Suisan Fish Market. The 110-year-old establishment has its own fleet of boats and has been distributing poke island-wide since long before it was popular off-island. The magnificent poke bar at ChoiceMart, no less, is stocked by an early-morning delivery across the island from Suisan. But an early-morning batch of poke will be soft around the edges by mid-afternoon, no matter how recently the fish was caught. Once the fish is cubed, the clock starts ticking.

I asked the man, “Do you have anything to serve the poke with, like maybe ... “

“Rice,” we both said at the same time. “You want a poke bowl?” he asked, reaching toward me in a manner that said hand over the poke.

“Please,” I replied, as I relinquished the poke, trying in vain to contain my excitement.

He returned moments later with a styrofoam take-out box and placed it on the bar, along with a caddy stocked with bottles of soy and Tabasco sauces and slender yellow packets of Best Foods mayo, among other seasonings that were not relevant to my interests. Inside the box: two scoops of rice, my poke, and a plastic dish containing small pieces of nori, sesame seeds, salt and particles of dried fish.

Other than the fish, it contained little more than salt and minced green and sweet onions. But with fish that fresh, and freshly cut, less is more. And with the Tabasco and mayo from the caddy I was able to massage the poke and seasonings into a spectacular spicy ahi with a decidedly Japanese feel.

“What do you call this flavor of poke?” I asked.

“Oh,” said the man, with the makings of a grin around his goatee. “We just call that Hawai’ian style.”

But unlike the ChoiceMart Hawai’ian-style, this version didn’t have any kukui nuts or limu. Only that seaweed seasoning, which I asked my host about.

“That’s furikaki,” he said with a growing grin.
“Oh,” I said, “you mean the Japanese stuff?”
“Yeah,” he said and straight-up started laughing like I just told him a funny joke. It was a big, booming laugh that shook the room.

It was no joke when the CEO of Suisan, of Japanese descent, was interned during the war. To this day, many Japanese practices pervade the company, which guarantees its boats never go out for more than two days, so the fish is never older than that when cut. Because at a certain point, fresh is no longer best. And fresh poke made from frozen fish is better than old poke made from fresh fish.

I mentioned to the man that it didn’t look like his poke was made at seven that morning. “That’s just three hours old,” he confirmed. I took another pack of America’s southernmost poke from the Coke fridge and brought it home to the rental house, where I ate a second poke bowl on salad greens.

The next morning, the cut edges of the leftover poke cubes were less sharp, and the sheen on the faces had gone flat. I squeezed in lime juice from a tree out back, and called it good. Good ceviche, that is.

When I return to the parallel universe of Montana, I’ll be seeking out ahi that was frozen on the boat, preferably in steaks that were sliced across the grain. I’ll be looking to thaw and cube that ahi steak and make some poke that’s more than OK.