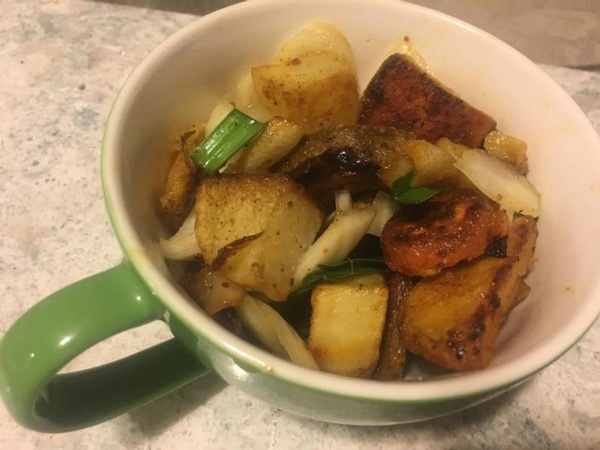 As a new food season dawns, epicures face wave upon wave of fresh produce over which to obsess. But as we celebrate the evolving cast of seasonal bounty, the strawberries, tomatoes, sweet corn, peaches and other joys of summer, it’s important to remember another subset of crops that often slip through the cracks, in part because they are always in season. Literally, figuratively and most importantly, deliciously, carrots, potatoes and onions are always in season. As far as dinner goes, they are immortal, because they are always available locally, all year long.

As I made my rounds last week at the farmers market, I admired the displays of new carrots and potatoes, freshly dug and washed and gleaming like polished vegetal jewels. There were also bunches of spring onions and new
garlic, and the occasional bunch of chives. These pungent plants are all members of the fragrant lily family, of
which the bulbs, leaves, stems and flowers are all edible, at one time of the year or another.

In addition to these fresh-faced flora, there were also much older incarnations of these very same veggies, sometimes at the same farm stand. I found a five-pound bag of old, soft-ish potatoes with bulging eyes from last year for $2. They were baking potatoes, a little soft but perfectly serviceable, thanks to being properly stored through the winter. “White inside,” promised the babushka who sold them to me.

Other farmers had large old carrots for sale, similarly overwintered in the root cellar. These were not to be confused with the sweet morsels that children enthusiastically eat like candy, but rather, they were cooking carrots. And when I brought them home, they cooked very well.

Another farmer had onions for sale. They were from last year, and still rock-hard. He wouldn’t tell me how he stored them so perfectly, but I’m pretty sure it involved a root cellar dug beneath an Indian burial ground with a Ouija Board inside. As I gave one of his elder onions a gentle squeeze, the farmer beckoned me behind his stand to show me a box of onions he’d recently culled from his magic storage unit because of soft or moldy spots. He offered to sell me a 30-pound box for three bucks. Done.

When I got home, I set about making a dish that is always in season, despite usually being billed as cold weather comfort food. A simple pan of roasted roots.

Sure, we could puree the whole business into a soup. Perhaps make vichyssoise. But that sounds like a lot of work and cleanup to me. I’m partial to the ole’ slice and cook, with a bit of sprinkle, drizzle and toss.

I peeled my honker potatoes, cut them into quarters lengthwise, and cut each resulting wedge crosswise into half-inch slices. I sliced the carrots to about the same thickness, at a slight angle for extra fanciness, and added them to the baking dish.

Many people add onions to their roasted roots. Despite growing half-underground, onions are not technically roots. But they behave like roots in so many ways that many epicures consider them honorary root crops. One difference is their water content, which they add to the

pan of roots. This results in the carrots and potatoes being steam-fried (freamed, if you nasty) until the water is gone, at which point they can brown. The roast onions can add a deliciously dark chewy essence, full of intense flavor concentrate. But they will also be the first to burn, if you let them, littering your roots with crunchy, carcinogenic bitter bombs. So if you go this route, extra care is warranted.

Or, for a hearty and zingy alternative, consider Immortal Potato Salad.

First, I selected the ugliest onion in my box of culls, cut off the bad part – which in this case was most of it – and sliced the good part as thinly as I could. I then marinated the slices in a mixture of lime juice and white balsamic vinegar with salt and garlic powder. If you have sweet onions at your disposal, they are preferable here.

I then proceeded to roast the carrots and potatoes. I drizzled them in olive oil, tossed in a few tablespoons of butter, sprinkled with salt, garlic powder and some kind of seasoning, such as thyme, Herbs de Provence, or any number of exotic spice mixtures like Ethiopian Berbere, Indian garam masala spice mix or Egyptian Dukkha. Or, one could simply leave it at salt and garlic powder with a little black pepper as necessary, and maybe some chili powder. One can also skip the carrots and onions and simply make oven fries. And of course, you can choose to carefully roast your onions with the roots.

Besides the different cooking times – the onions could, after all be added later – another reason I like to marinate the onions and add them separately is that doing so creates a vinaigrette for the Immortal Potato Salad. When the marinated onions are mixed with the roasted roots, the oil on the roots combines with the vinegar and acid of the onions and dresses a salad that can be tossed any time of the year and twice on Sunday, with young and old ingredients alike. And by all means, add mayo if you wish. You know I would.